After six defeats in seven games, the pressure is cranking up on Patrick Vieira at Crystal Palace… a gaping hole in midfield and punishing fixtures to come mean the Eagles are DESPERATE for a result against Man United tonight

Football fans are famously fickle. Supporters can be on top of the world and optimistic after an important win, while a damaging loss can leave them crushed and pessimistic. That’s the capricious nature of football fandom.

Crystal Palace manager Patrick Vieira has criticised that mentality, saying – rightly, understandably – that he urges his team neither to be too high after victories nor too low after defeats.

Yet Wednesday night’s crucial clash with Manchester United could go either way. A loss, making it seven in their last eight in all competitions, would see the pressure crank up further on the boss and increase the urgency of their transfer plans.

A win at Selhurst Park in front of their bouncing, boisterous home crowd, meanwhile, would dissipate much of the current frustration and angst around the club, reassure fans the club are on the right path and give players a much-needed boost.

Amid a gaping hole in midfield and a lack of squad depth, talisman Wilfried Zaha’s contract running out at the end of the season and a punishing fixture schedule, Sportsmail looks at why Palace will be desperate for a result against United. 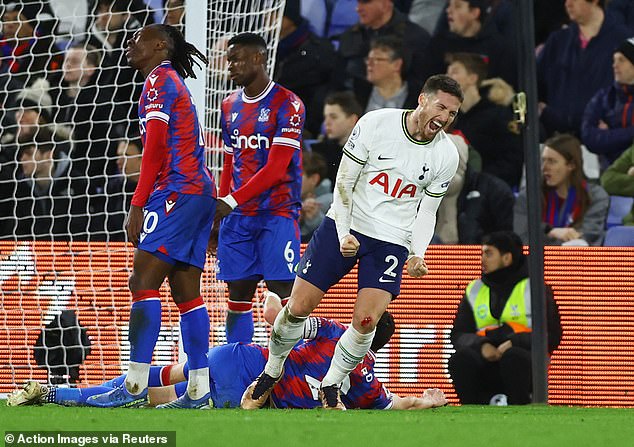 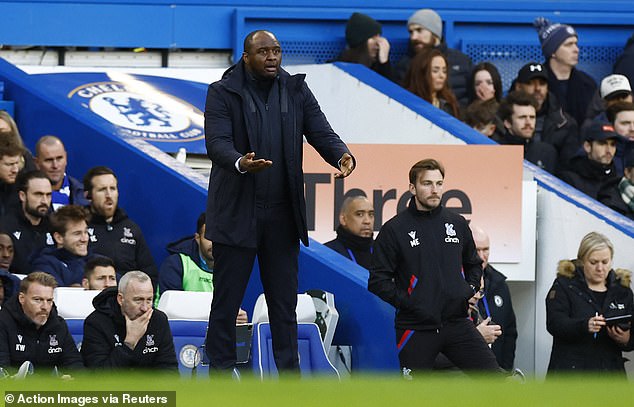 A far cry from last season

Last season went about as well as it could have for Crystal Palace, the general feeling goes. A 12th-place finish in Patrick Vieira’s first season in charge, one point off Newcastle and four points off eighth place.

Although many clubs could make similar arguments, that total of 48 points, and their first ever positive goal difference, could have been higher but for costly late goals conceded against Brighton (twice), Arsenal, Aston Villa, Leeds, Chelsea and Everton.

All while overseeing a huge squad turnover, with seven senior, experienced players leaving at the end of their contracts and the average age brought down massively with the addition of promising young talents like Michael Olise and Marc Guehi. 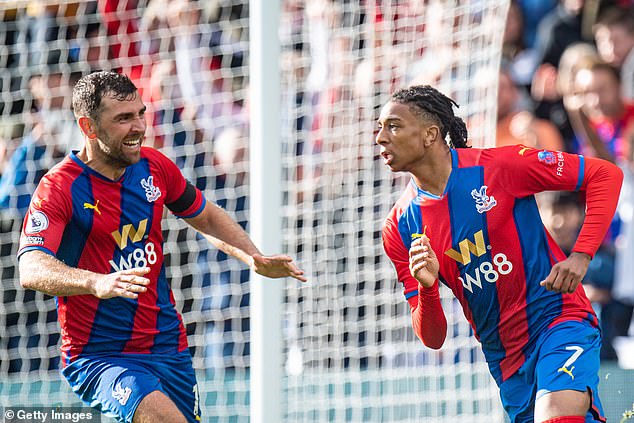 Much of the positivity of last campaign, Vieira’s first in charge, has been replaced by angst

The often stale and stodgy safety-first football of Roy Hodgson (necessary at the time) was gone and in its place was a progressive, proactive, pressing style of play carried out by a young, dynamic team who looked like they could trouble anyone.

While the goodwill and hope and trust in Vieira from last campaign has not completely evaporated, there are now concerns Palace have stood still – or even gone backwards – while others around them have progressed.

Michael Olise’s stoppage-time winner at West Ham on November 6 delighted those inside the London Stadium and marked the club’s fourth win in six games. The result left them 10th – level on points with Liverpool – and four points off United in fifth.

Things have been largely downhill since there, with six losses in seven games in all competitions and just one win, a 2-0 victory against relegation-threatened Bournemouth thanks to two set-pieces. 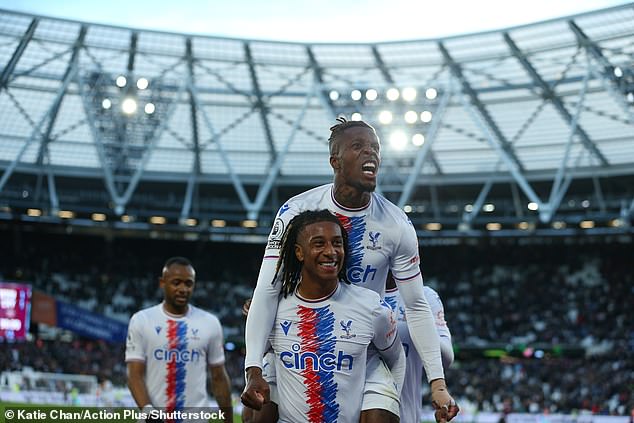 Narrow losses away at Newcastle (on penalties in the League Cup), Nottingham Forest (which saw a missed Palace penalty and a questionable VAR call) and Chelsea (conceding a set piece with goalkeeper Kepa man-of-the-match) are excusable.

But successive thrashings against an out-of-form Tottenham, 4-0, and promoted Fulham, 3-0 albeit hampered by two red cards, followed by a baffling 2-1 reverse against an awful Southampton in the FA Cup, all at home, must lead to questions.

Glaring individual errors, set-piece weakness and a lack of a clinical edge – problems not unique to Palace, true – are costing the side dearly and though the Eagles arguably deserved a draw against Chelsea, they still found a way to lose.

Confidence is on the floor and will be even lower if they come up short against United as well.

Much of these issues are down to a thin and imbalanced squad. The summer transfer window saw the experienced Martin Kelly, Cheikhou Kouyate and Christian Benteke leave, with Sam Johnstone, Chris Richards and Cheick Doucoure coming in.

Doucoure was intended to replace Kouyate in defensive midfield, Richards to replace Kelly as centre back cover, while goalkeeper Johnstone on a free was more of an opportunistic move. To be fair, Malian Doucoure, 23, has been generally excellent. 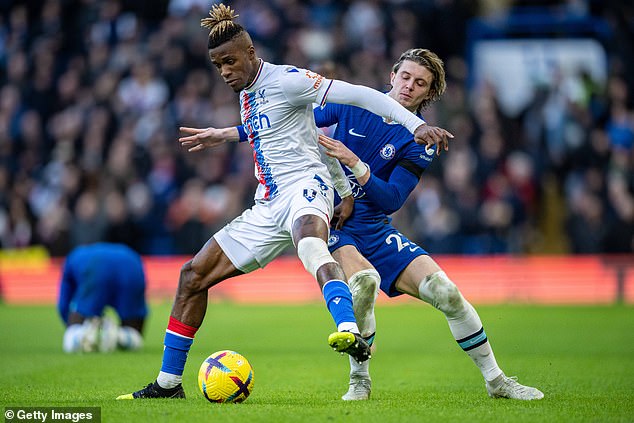 But Richards, who arrived from Bayern Munich in an £11m deal, has only played 75 league minutes and veteran James Tomkins was preferred to replace the injured Joachim Andersen against Chelsea, highlighting Richards being not trusted yet.

All the while, the two or three positions where strengthening was most needed – central midfield, right back and striker – have been ignored.

There is a gaping Conor Gallagher-shaped hole in midfield – the Chelsea loanee was Palace’s Player of the Year last season – and when the Blues kept him this campaign, the folly of Palace putting all their eggs in the Gallagher basket was exposed.

The 4-3-3 of last season, with two midfield No 8s, now necessitates two players in Eberechi Eze and Jeffrey Schlupp playing out of position, while natural central midfielder Will Hughes is ignored despite several promising cameos and grizzled veteran James McArthur, 35, has not yet played this season due to a hip injury,

The performances of club stalwart Joel Ward, 33, at right back have regressed alarmingly and Nathaniel Clyne, 31, has struggled too. Cover at left back (for Tyrick Mitchell) and left wing (for Zaha) is virtually non-existent. 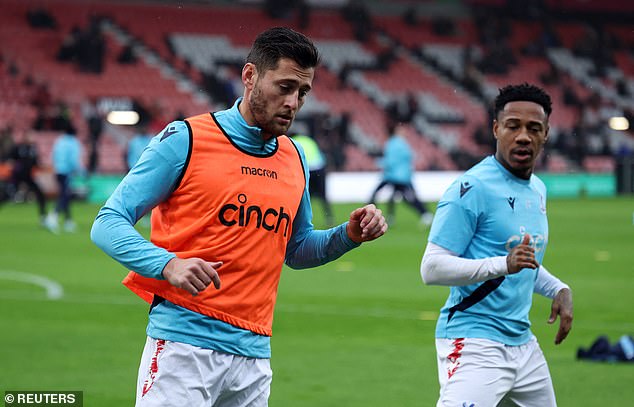 Up front, Palace’s most potent goalscorer Odsonne Edouard, who joined from Celtic in 2021 for an £18m fee, is now routinely left out, with the prosaic Jordan Ayew, who has five goals in his last 90 games in all competitions, is almost never dropped.

Vieira has very publicly declared the board need to help him secure the January signings he wants and has identified, but co-owner Steve Parish insists any deals this month are likely to be loans, with serious business probably left until the summer.

While not living beyond the club’s means is laudable, not having – or delivering on – a plan to at the very least replace Gallagher, or strengthen elsewhere where needed, looks very short-sighted and essentially means the rest of this season is written off.

What perhaps doesn’t help is the contract situation of Wilfried Zaha. The utterly talismanic forward – and Palace’s best player – sees his five-year deal run out this summer, and most fans expect him to move on and test himself at a higher level. 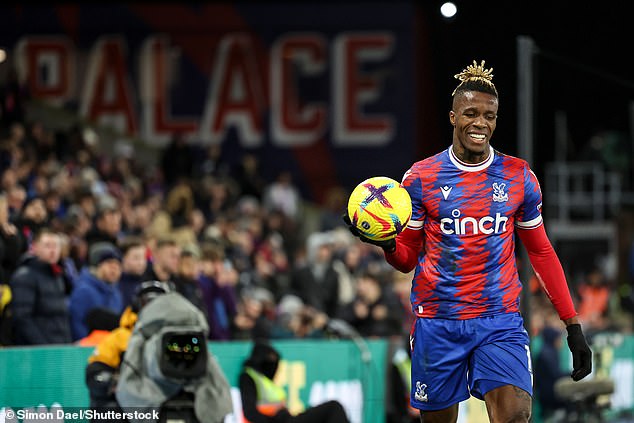 Which is fair enough: he has been a brilliant servant and potentially the club’s greatest of all time, while there is no doubt he is a genuine professional and is fully committed to the cause for the rest of the season.

But with big question marks over the future of a player of his importance, with just one goal in the last nine – including a costly missed penalty against Forest – and a recent move up front from the left wing hindering his effectiveness, it’s an unwanted headache for Vieira.

If he does go, replacing him with a player of similar quality – maybe Watford’s Ismaila Sarr or Porto winger Pepe – would cost the club a large amount and potentially eat into a large chunk of the summer budget for a midfielder and/or right-back.

A loss against United would worry Palace fans further in the context of the thorny fixture run to come.

After games against ‘Big Six’ Spurs and Chelsea, the south London side now have nine tricky games, all against sides above them: United, Newcastle, United again, Brighton, Brentford, Liverpool, Aston Villa, Manchester City and Arsenal. 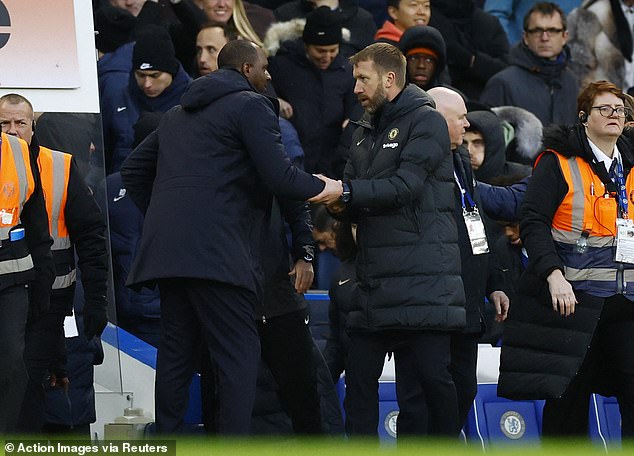 After losing against Chelsea, Palace now face an extremely difficult run of fixtures – meaning a positive result against Erik ten Hag’s high-flying Red Devils midweek would be a massive boost

That represents five games against the current top four, plus tough clashes with rivals Brighton and the in-form Bees, sandwiched by matches against the mighty (if out-of-form) Liverpool and Unai Emery’s resurgent Aston Villa.

Of course, every team plays every other team home and away of the course of the season. Obviously. However, such a tricky condensed run could yield only a handful of points, potentially pulling the side back down towards the dreaded drop zone.

Though their fixtures from April onwards look far more manageable, confidence and momentum could be dangerously low by that point and the pressure of a possible relegation fight could come into play.

To be clear: Vieira is not in any real danger of being sacked. He’s not even close. Though there have been mistakes, most fans recognise he can do a fine job if given the right tools and backing.

The return of McArthur from injury will plug a gap and if Palace manage a few wins – or even a few convincing performances – soon, things will look much more rosy in the Selhurst garden and fans will feel far more optimistic about next season.

A positive result against United would go a long, long way towards that too.