Crystal Palace will again have to do without forward Wilfried Zaha; Nick Pope and Jack Cork have returned to training for Burnley; follow Crystal Palace vs Burnley on Sky Sports Premier League and Main Event from 2.45pm on Saturday; kick-off 3pm 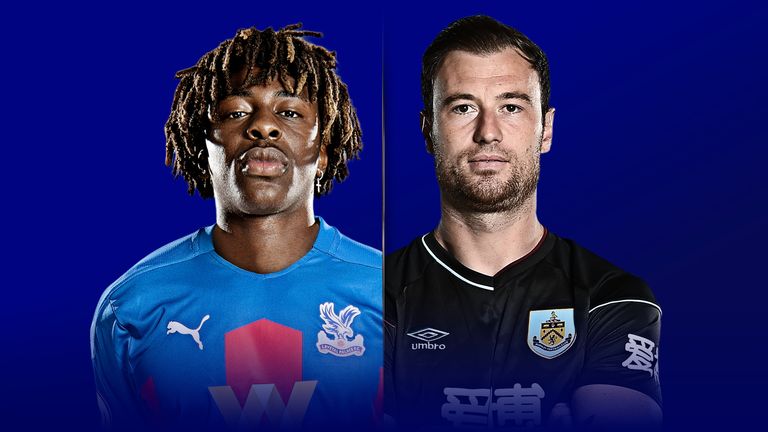 Team news and stats ahead of Crystal Palace vs Burnley in the Premier League on Saturday; kick-off 3pm.

Crystal Palace will again have to do without forward Wilfried Zaha as the depleted squad prepare for Saturday’s Premier League match against Burnley.

Zaha suffered a hamstring strain in the victory over Newcastle and missed the 2-0 defeat at Leeds on Monday night, but defender Joel Ward (hip) should be in contention again.

Nick Pope and Jack Cork have returned to training for Burnley but Sean Dyche still has a number of other injury concerns.

Dyche is expected to err on the side of caution with Charlie Taylor and Robbie Brady as they continue their own recoveries from what were described as minor complaints but have already kept them sidelined for longer than hoped.

Chris Wood is also doubtful, but Dyche expressed optimism that Josh Brownhill could come back into contention.

These are the games Sean Dyche targets as “Cup Final” type matches. His side have taken 12 points from a possible 24 against teams in the bottom half this season including a 1-0 win over Palace in the reverse fixture. The shackles come off slightly in these games and Burnley are a tricky team to deal with when pummelling you from all angles. Palace are here for the taking too.

Their 2-0 loss at Leeds last night made it 17 defeats from Palace’s last 19 Premier League games without their talisman Wilfried Zaha. Without him, they are a tame team.

Burnley are a tempting price at 21/10 and I would not put anyone off included them in their weekend selections but I’d rather back Ashley Westwood to get an assist at a juicer 4/1 with Sky Bet. Charged with taking set pieces and possessing a clever pass in his locker, the Burnley midfielder is one of the most creative players in the Premier League – only Jack Grealish, Kevin De Bruyne and Bruno Fernandes have created more chances defined as “big” for their teammates this season (7) and his expected assists figure a 4.59 suggests he’s unlucky just to have two actual assists to his name this campaign.

Despite having some big lads in their ranks, Palace, who have conceded the most headed shots of any team this season (71), have looked suspect at defending set-pieces with Pascal Struijk missing two massive chances for Leeds on Monday. I’m not sure Ben Mee or James Tarkowski will be so forgiving from a Westwood delivery.

Pitch to Post Preview – Guardiola v Mourinho, Arsenal’s dip and development, and how far away are Man Utd?

In this week’s Pitch to Post Preview Podcast Peter Smith is joined by Sky Sports News reporter Paul Gilmour and Sky Sports feature writer Nick Wright to look ahead to Saturday’s clash between Pep Guardiola’s Man City and Jose Mourinho’s Tottenham, with the league leaders’ imperious form and Gareth Bale’s continued absence from the Spurs XI on the agenda.

We also hear from Sky Sports pundit Alan Smith on Arsenal‘s inconsistency, how Mikel Arteta is building for a better campaign next season, and whether Leeds striker Patrick Bamford can make it into England’s squad for the Euros.

Plus, Nick Wright delivers his verdict on why Manchester United should be ready for a title tilt, Sam Allardyce‘s struggles to turn things around at West Brom, and shares his Pitch for what will happen in the Premier League this weekend.