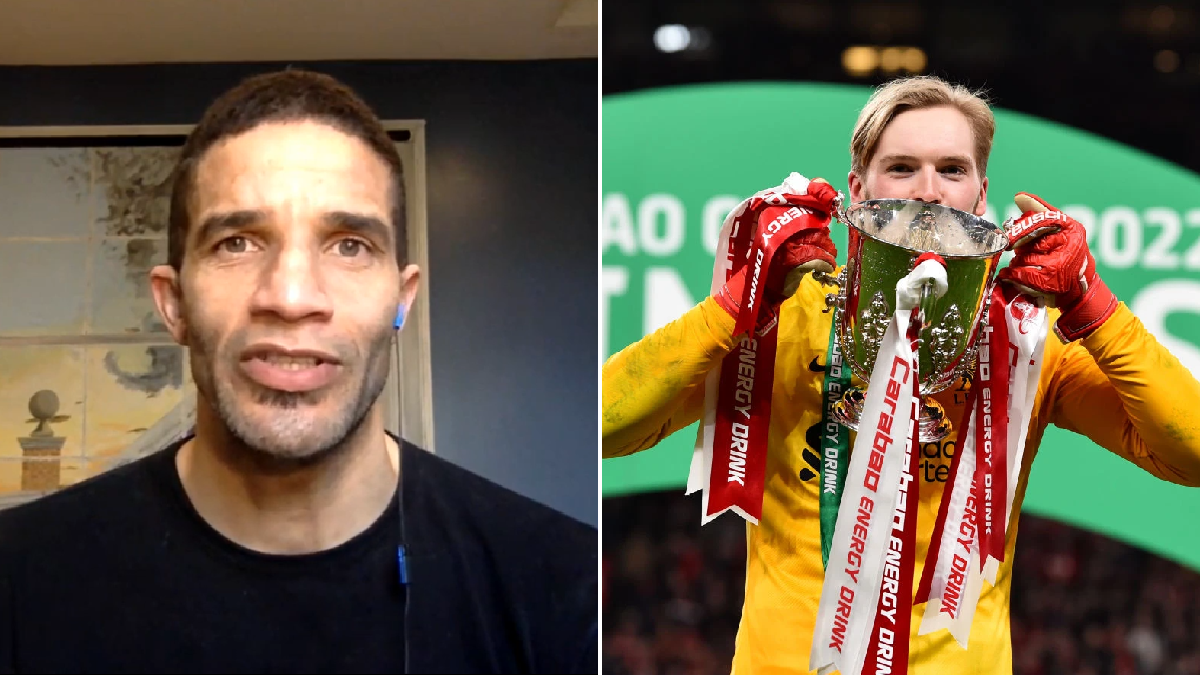 Liverpool’s Carabao Cup final hero Caoimhin Kelleher may need to leave Anfield in order to secure more game-time and progress in his career, according to former England goalkeeper David James.

Jurgen Klopp’s side won a dramatic penalty shootout to claim the first domestic trophy of the season against European champions Chelsea on Sunday.

While Kelleher failed to save 10 successive spot-kicks at Wembley, he held his nerve to smash home his own penalty before Chelsea substitute goalkeeper Kepa Arrizabalaga blazed wildly over.

Klopp opted to start Kelleher ahead of first-choice Alisson Becker and the decision paid off, with the Irish shot-stopper making a number of important saves in normal time and then edging out Kepa in a thrilling penalty shootout.

Kelleher, 23, has featured in all six of Liverpool’s domestic cup games this season but only two of their 26 Premier League fixtures, and James says he will need to consider his future at Anfield soon.

‘It’s an interesting dynamic and something that I’ve been noticing a lot more in the last year or so,’ James, who made 277 appearances for Liverpool, told Sky Sports.

‘You see the rotation of the squads and Man City and Liverpool seem to do it more than anyone else.

‘Kelleher has proved himself as a very, very capable goalkeeper. But when Alisson signs a new five-year deal you ask yourself if you’re planning to be Liverpool’s next number one or is this just a stepping stone.

‘At the moment he’s getting a lot of good reviews, he can get away with not playing every week right now.

Asked what he would decide to do if he was in Kelleher’s shoes, James responded: ‘I would leave.

‘I couldn’t help it, I just wanted to play all the time. But leaving Liverpool is a big decision to make, especially for Kelleher.’

After lifting the Carabao Cup trophy at Wembley, Liverpool are still in with a chance of winning the quadruple this season.

Former Manchester City defender Micah Richards doesn’t expect Liverpool to win all four trophies but insists it is an exciting time for the club.

He told BBC Radio 5 Live’s Monday Night Club: ‘Do I think they will win the quadruple? No.

‘Manchester City are six points clear at this moment in time. Over 38 games, I think City are a little bit more consistent if we talk about the last three or four years.

‘But I just think Liverpool now are better equipped. They’ve done special things and won the Super Cup, the Champions League, the league and now the League Cup.

‘We’ve always talked about Manchester City being so great – and why we talk about them so much is because of the strength in depth. Now Liverpool are starting to get strength in depth, so if they can maintain that while keeping everyone happy, we’re talking about two of the best teams we’ve ever seen in the Premier League. They push each other.

‘Liverpool can do whatever they want. From the manager to the assistant manager dancing in the dressing room at Wembley, I’d love to be around that. He gets it. I think it’s onwards and upwards for Liverpool.’