It is a fanciful plot for the wildest Hollywood script, but Wrexham’s glamorous new owners were last night daring to dream of Premier League football in north Wales.

Ryan Reynolds and Rob McElhenney had already won over the sceptical locals, having spent a night downing shots at the Turf Hotel next to the Racecourse Ground.

The pair have now set expectations skyward for the National League club, with McElhenney promising that “this is going to surpass the Super Bowl” as far as he is concerned. 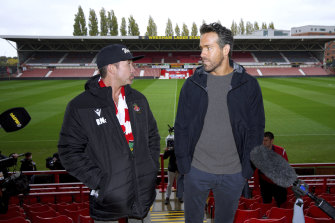 Neither Deadpool star Reynolds nor McElhenney, best known for creating TV sitcom It’s Always Sunny in Philadelphia, have Welsh roots. And as they detailed the club’s latest 3-2 loss to Maidenhead, Reynolds, 45, joked he was “still learning offside”.

However, as they spoke to press under rainy grey clouds for more than an hour, McElhenney, in particular, spoke with apparent sincerity of their determination to revive a sleeping dragon. Watching his other beloved team, the Philadelphia Eagles, win the Super Bowl for the first time in 2018 “was one of the greatest days of my life,” he said, but added: “I think this is probably going to surpass that.”

This week has been the first time the United States-based actors have spent an extended period in Wrexham since taking 100 per cent ownership of the club in February. Neither actor knew much about the club when McElhenney first called Reynolds during the peak of the pandemic to say he wanted to go into football ownership. 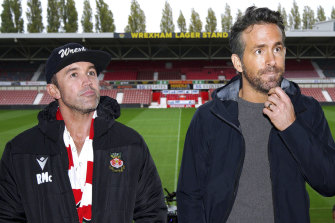 Rob McElhenney, left, and Ryan Reynolds aren’t football experts but are determined to see Wrexham rise to the top. Credit:PA

They eventually chose Wrexham after advisers told them it was potentially available, and they found out about the area’s close-knit working-class community. Outlining their determination to steward a club formed in 1864 and the third oldest professional football club in the world, Reynolds said: “We’ve been surprised how emotionally invested my friends and family are in this. It’s something incredibly contagious.

“It’s been tough as it’s been a year plus [since making their bid to buy Wrexham in September 2020] watching from afar and following on social media. I don’t profess to be a football expert, but I see the beauty of the fan and I see it through others. We’d be lying if the dream wasn’t the Premier League. We want to get back in the Football League and continue our way upwards.”

Wrexham, with new manager Phil Parkinson at the helm, have made a mediocre start to the season following substantial summer investment. The Red Dragons are 11th in the league after four wins from their first 11 games. 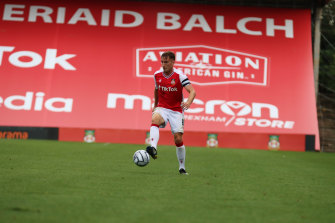 “Why not dream big?” said McElhenney of the prospect of reaching the Premier League. “Promotion and relegation, they are big stakes. That was the key to it all. It’s not something we’re used to back home. The club has been in this league for 13 years and some things are going to have to change.

“Some great people have kept the club alive in this time, but we are going to make some adjustments to meet the changes needed.” The pair, who are taking centre stage in a new access-all-areas documentary about the club, insist they are at Wrexham for the long haul. Reynolds said he was used to the wet weather “coming from Vancouver” while Philadelphia-born McElhenney said it “felt like home”.

“This club has been here 160 years when none of us were alive, and it will be here in another 160 years.”

“We wanted to buy a club that had a history and a connection to the community,” said McElhenney, who admitted he had fulfilled a boyhood dream by stepping on the pitch he owned and taking part in a penalty shoot-out with the Wrexham players. “The ground feels like a cathedral and full of the spirit of people who have been before. This club has been here 160 years when none of us were alive, and it will be here in another 160 years.”

Asked which celebrity pal he would like to bring to Wrexham, Reynolds chose actor and comedian Will Ferrell, but he insisted it was the club’s legacy that is important to him. Wrexham confirmed the unlikeliest of takeover approaches a year ago by Reynolds, the second highest-earning actor in the world after Dwayne Johnson.

Reynolds spent some of his spare time in lockdown swotting up on the club’s history, not least by watching old footage of the 1992 FA Cup giant-killing of then league champions Arsenal.