Dele Alli delivered a tenacious display against Liverpool, but they have been too few and far between – his miss was a frustrating picture of unfulfilled promise, although there may be life in his Tottenham career yet

Dele Alli put his hands to his face, he sunk to the floor and looked high into the dark north London sky.

A picture of frustration and unfulfilled promise, it seemed a fitting final image of this chapter of the midfielder’s career.

With Tottenham leading Liverpool 1-0 after half an hour, Alli had been fed by Son-Heung min. The goal was gaping; his shot went wide. 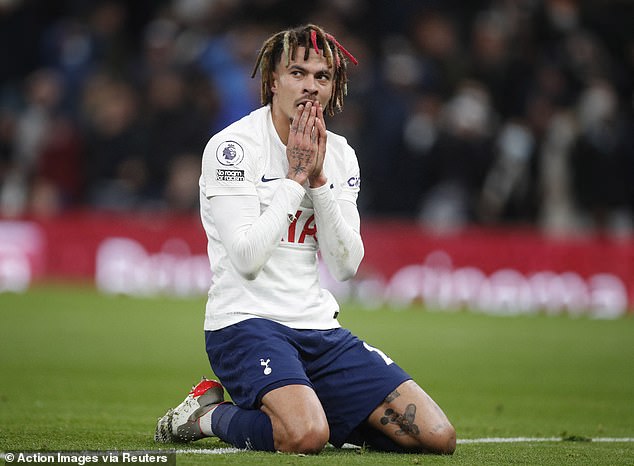 There was more angst to come on this night of high drama – moments before Andy Robertson’s second for Liverpool, Alli raced in on goal. This time he tumbled inside the area and demanded a penalty. Nothing doing once more.

But then, with 10 minutes to go, the Tottenham Hotspur Stadium rose to salute the midfielder. Alli’s name rang around this place.

With the January sales around the corner, Alli’s first Premier League start under Antonio Conte could well be his last – for now at least. This was a goodbye draped in contradiction and what might have been. Maybe those fans are right, perhaps we don’t just don’t understand. 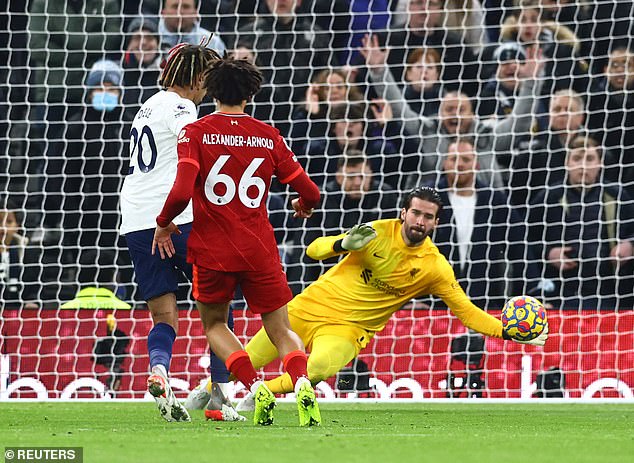 Alli squandered a golden chance to score in the clash, but the home crowd still sang his name

Displays of this tenacity and guile have been too few and far between. Any sightings of the midfielder have been rare since he dropped out of the team in October. On this evidence, though, his Tottenham career might have some life left.

For Alli, Tanguy Ndombele and Harry Winks, this game represented a golden opportunity. Not only to prove their worth – here or elsewhere – but also to leave their mark on a hollow Liverpool core.

Alas, for much of a frantic first period, midfield became a no-man’s land as both teams moved the ball from back to front quickly. Spurs, in particular, looked in behind for Son and Harry Kane as soon as possible.

Before too long, however, Tottenham’s midfield came to life. Moments before Kane’s opener, Alli had a chance to drive at Liverpool’s back four. His pass went astray but Winks and Ndombele combined to finish what he started. 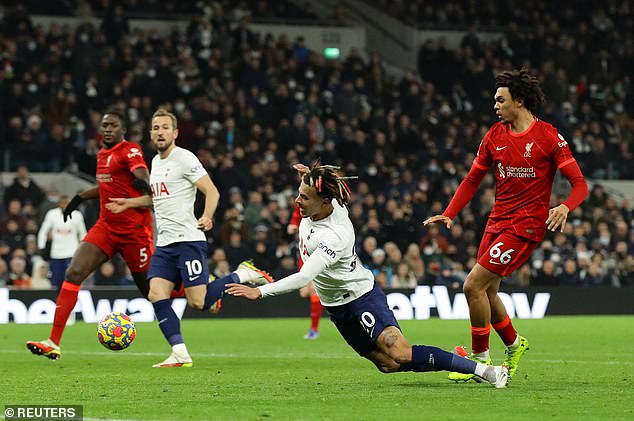 The midfielder raced through on goal and fell inside the box, although no penalty was given

From there Alli’s task became about more than diligent running. He led one of Spurs’ rapid counters but his heavy touch saw the opportunity disappear – much to Conte’s visible ire.

The manager looked ready to combust when Alli squandered that golden chance to double their lead.

The midfielder’s only mitigation? Alisson’s fingertips had pushed the shot past the post.

No wonder Alli waited for the Liverpool goalkeeper at half-time. You can imagine the question on his lips. 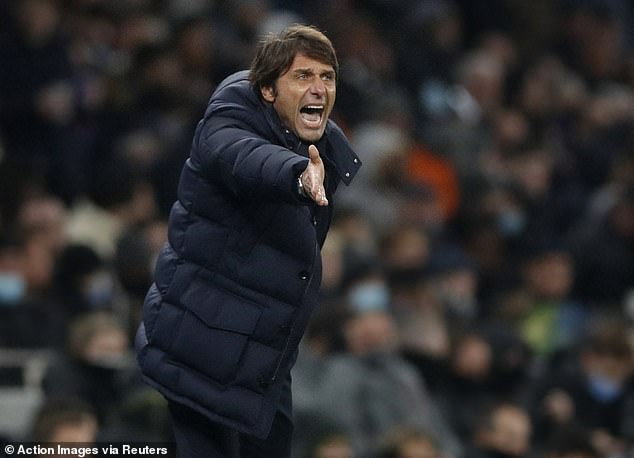 To his credit, though, Alli would not be dimmed and the Spurs crowd responded to his tireless harrying without the ball.

On it, he fed Kane in behind to spark another half chance and, by the end of a pulsating half, Winks was the only Tottenham player to have more touches than his 30.

Alli remained a willing outlet as the game grew more stretched and, shortly before the hour, he should have created Spurs’ second. 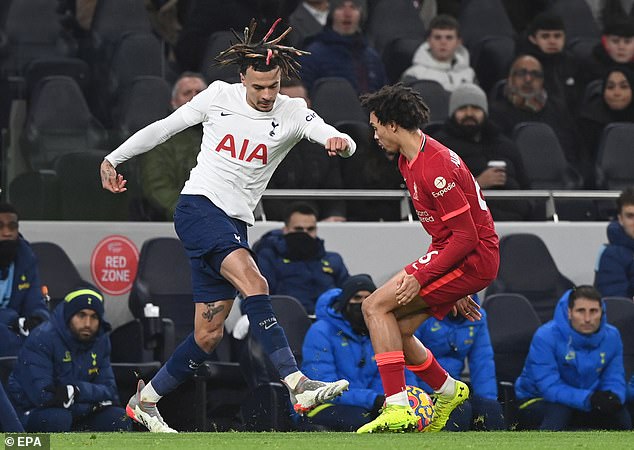 But Alli was a willing outlet, but his showing was a picture of frustration and unfulfilled promise

If Alli’s brilliant curved run inside Trent Alexander-Arnold made the opportunity, his scuffed square ball all-but squandered it. Alisson still needed to be across brilliantly to deny Kane but he should never have been afforded that chance.

Alisson and Alli were face-to-face once more with 21 minutes to go, only for the midfielder to tumble and Liverpool to head down the other end and score.

Not that anyone here held it against him, though. We’ve got Alli, they reminded us late on. For now, at least.