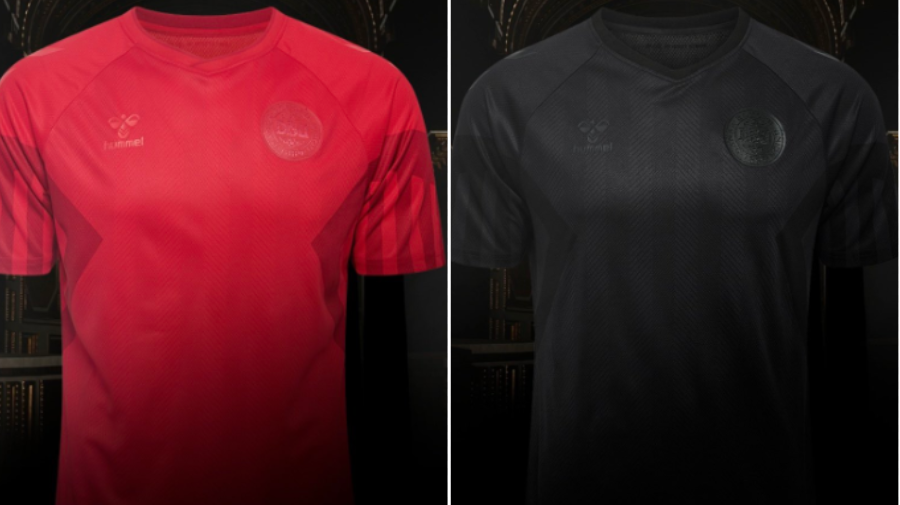 Denmark’s new jerseys for the World Cup finals in Qatar have been designed in protest at the host nation’s human rights record, their kit manufacturers have announced.

Danish sportswear company Hummelsport said it wanted to ‘send a duel message’ when it unveiled Denmark’s shirts for Qatar 2022 on social media.
Hummelsport said on Instagram: “With the Danish national team’s new jerseys, we wanted to send a dual message.

‘They are not only inspired by Euro 92, paying tribute to Denmark’s greatest football success, but also a protest against Qatar and its human rights record.

‘That’s why we’ve toned down all the details for Denmark’s new World Cup jerseys, including our logo and iconic chevrons.

‘We don’t wish to be visible during a tournament that has cost thousands of people their lives. We support the Danish national team all the way, but that isn’t the same as supporting Qatar as a host nation.

‘We believe that sport should bring people together. And when it doesn’t, we want to make a statement.’

Hummelsport posted a similar message on Twitter and it follows a series of protests by human rights campaign groups against the treatment of migrant workers in Qatar.

Human rights campaign groups, including Amnesty International, have called on FIFA to set aside 440million US dollars (£380m) to support the scheme – equivalent to the amount it is set to hand out in World Cup prize money.

The Football Association’s chief executive Mark Bullingham said last week that he had been assured that LGBTQ+ fans will not face arrest for holding hands in public.

England captain Harry Kane will continue to wear an anti-discrimination armband during the team’s World Cup matches in Qatar this winter.

Kane wore the armband for the first time in England’s recent Nations League defeat to Italy after the FA joined nine other European federations, including the Football Association of Wales, in support of a season-long OneLove campaign against discrimination.

World Cup organisers, however, dispute Hummel’s claims over the number of deaths of migrant workers, insisting they had ‘engaged in robust and transparent dialogue with the DBU’ over any concerns raised.

A statement from the Qatar 2022 supreme committee added: ‘We whole-heartedly reject the trivialising our genuine commitment to protect the health and safety of the 30,000 workers who built FIFA World Cup stadiums and other tournament projects. That same commitment now extends to 150,000 workers across various tournament services and 40,000 workers in the hospitality sector.

‘The onus should always be on countries to do more to protect the rights of peoples all over the world, including in Denmark.

‘The Supreme Committee’s work is recognised by numerous entities within the international human rights community as a model that has accelerated progress and improved lives.

‘Like every country, progress on these issues is a journey without a finish line, and Qatar is committed to that journey.

‘We urge the DBU to accurately convey the outcome of their extensive communication and work with the SC, and to ensure that this is accurately communicated to their partners at Hummel.’