Dennis Bergkamp believes Arsenal are ‘losing their DNA’ as the former Gunners’ striker questioned the mentality of the current team. The Dutch forward enjoyed a successful 11-year period at the north London club, winning ten trophies.

But Arsenal have been in decline in recent seasons and are currently at risk of missing out on European football for the first time since the 1995/96 campaign.

Having experienced great times with the Gunners, Bergkamp feels the club have lost their way and no longer resemble a typical Arsenal side.

“After I left the club I always kept in touch with Thierry [Henry] and Patrick [Vieira]. And of course I continued to follow the games of Arsenal. I have played an important part of my career there, I have had a testimonial there. The club is in my heart, I have become a fan of players,” said the 52-year-old.

JUST IN: Arsenal have two options to replace Martin Odegaard this summer 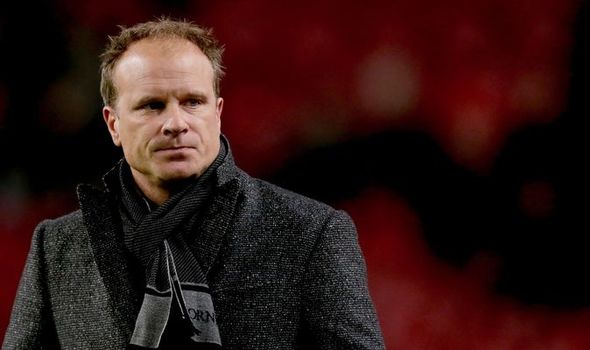 “Just like Patrick and Thierry, I recognise the Arsenal from our own time less and less. The ambition to win top prizes is in Arsenal’s DNA. Never accepting loss.

“That mentality has slowly disappeared. I sense resignation about the current situation. That is serious.

“As if, given the financial situation, it is normal for Arsenal to end in the middle bracket. That does not belong to this club. Arsenal’s DNA must be restored.”

Bergkamp is now trying to bring back good times to the club, alongside former Invincibles duo Patrick Vieira and Thierry Henry.

The trio have backed Daniel Ek’s takeover bid to become the new owner of the club, with the Spotify owner viewed as a suitable candidate for the role.

Ek claimed his £1.8bm offer to buy the club was turned down by the Kroenke family, though they have not given up hope of succeeding just yet.

“I understand that, in addition to that offer, Daniel [Ek] has now reached out twice to Josh Kroenke and his bankers,” Bergkamp told Dutch football magazine Voetbal International.

“Whatever Kroenke’s intentions are, it would be good if we at least have a conversation with each other. In the interest of the club.

“Regardless, Daniel is not a quitter and neither are we football boys. We are here to stay.

“Daniel has been an Arsenal fan all his life. A real. He also appeared to be worried about the downturn at the club for some time. When the Super League dominated the news for days, Daniel just about exploded. That was when he wanted to continue and contact us,” Bergkamp added.

“During a Zoom meeting with Thierry, Patrick and I, he shared his concerns and plans with us. That made an impression from the first moment.”