Real Sociedad’s Diego Rico opens up on trying to stop Cristiano Ronaldo, Antony’s showboating and struggling under Eddie Howe at Bournemouth… with the Spanish side aiming to beat Man United to the top of their Europa League

Cristiano Ronaldo has scored 14 times in his career against Real Sociedad but never a goal in the Spanish club’s stadium – former Bournemouth defender Diego Rico plans to keep it that way tonight.

The visit of Manchester United is being called the biggest European game in the club’s recent history and if Real Sociedad avoid a two-goal defeat they will top the group and go straight into the last-16.

‘I think he’s the same Ronaldo as always,’ says Rico when it’s put it to him that marking the 37-year-old is not the task it once was. 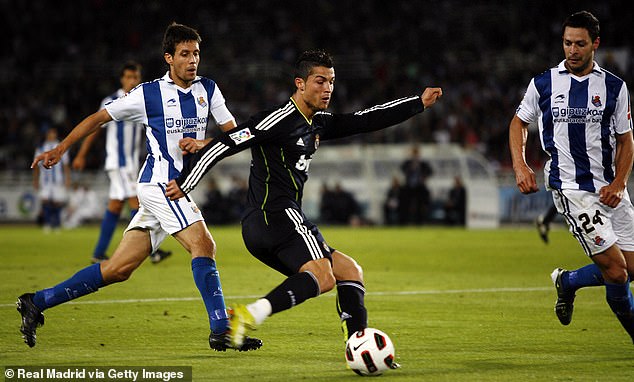 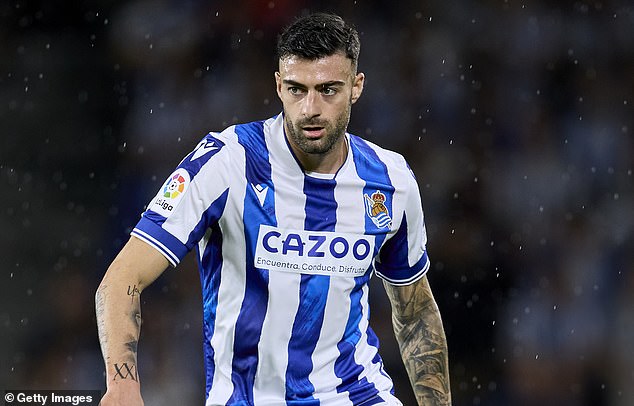 ‘He can score a goal against you from any type of cross or a shot from anywhere. We have to be very focused on him and on all their players.’

The last time Real Sociedad faced United in Europe it was February 2021 and pandemic restrictions on flights entering Spain from England were still a couple of weeks from being lifted.

The ‘home’ leg for Real Sociedad was won by United 4-0 behind closed doors in Turin.

Rico arrived at ‘La Real’ that summer and he’s been one of the reasons why coach Imanol Alguacil has been able to toughen up his team.

They still play the silky football but they are now rarely bullied – and a 100 per cent record in the Europa League this season illustrates that.

Under Eddie Howe at Bournemouth Rico’s move to England didn’t work out as he had hoped so when the chance to join Real Sociedad came around he was not going to let it pass. 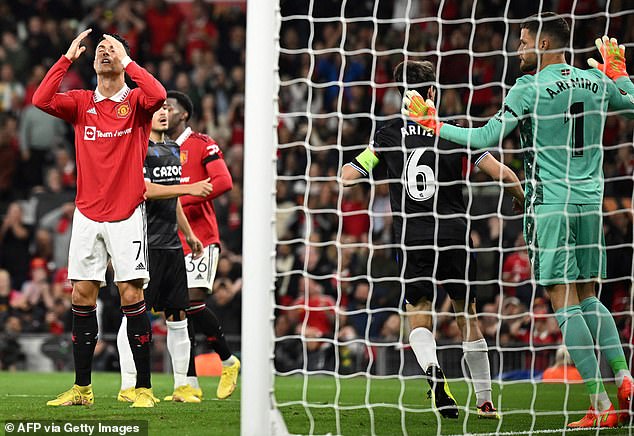 ‘I’m grateful for the opportunity and the advice that he gave me,’ he says of Howe.

‘He gave me my debut in the Premier League, I would have liked the chance to play more but you have to respect the decisions of the coach. And he’s showing what he is capable of now with Newcastle.’

There was perhaps no one happier when Rico returned than Javier, his younger brother by three years.

‘He suffers from two syndromes,’ explains Diego. ‘He was born with his spinal column out of place and the doctors told him he was going to be in a vegetative state all his life.

‘But he fought against that and his spine has been corrected with various treatments, lots of time in the pool and lots of fight.

‘Nothing has more value than that to see my brother, who was told he would have to spend his whole life in bed, as he is now.’

Javier will be at the Reale Arena tonight and he’ll be looking for a photograph or two post-game. ‘He goes to all my matches’ says Diego. ‘And after the games he stays to ask for photographs. 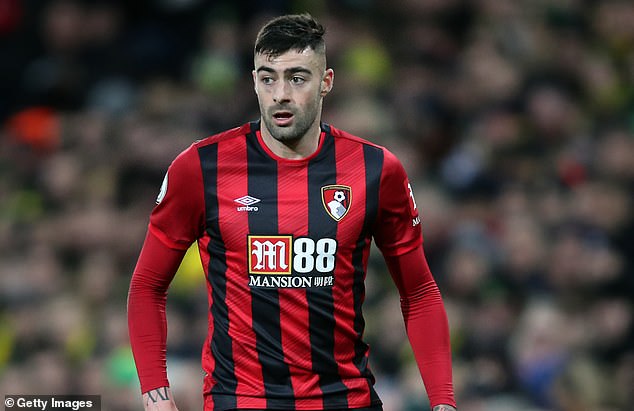 Under Eddie Howe at Bournemouth, Rico’s move to England didn’t work out as he had hoped

‘He has pictures of himself with all my teammates, the players I have played against, famous and not so famous.’

Tonight will be no different. When asked whose shirt, if any, Rico will seek out at the end of the 90 minutes he says: ‘De Gea, Casemiro, Rashford or Ronaldo. They are all world class players but I’ll change with any United player and it will be for my brother anyway.’

Has Javier put in a special request? ‘I’m sure he would want De Gea or Ronaldo, let’s see if he’s in luck.’

On the pitch left-back Rico may find it’s Antony and any 360 degree turns he decides to use who will be a more direct threat.

‘Every player should be able to do whatever they want on the pitch so long as they are not hurting an opponent,’ he says of the controversy that followed the weekend trick.

‘That’s the way he plays and he’s not going to change no matter how much the criticise him. And if the pass after it goes out then it’s even more harmless.’ 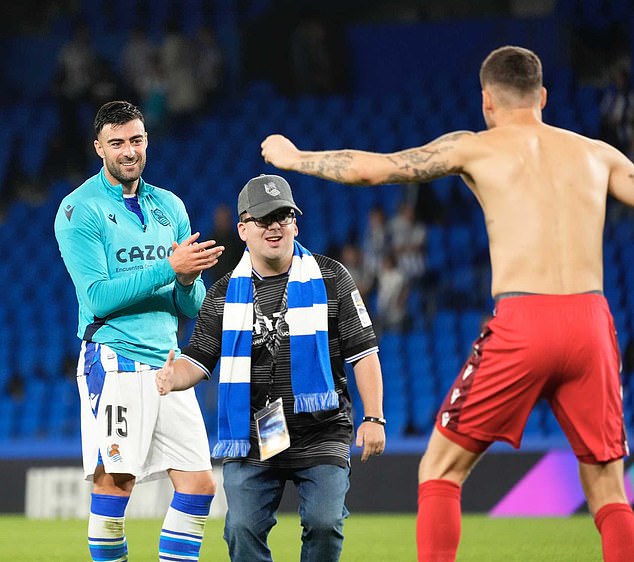 Getting the better of Ronaldo and Anthony tonight and finishing top of the group will be another indication of how Real Sociedad are being tipped in Spain to become the new third force behind the big two.

‘Well let’s win this game first,’ he says. ‘We still haven’t achieved anything yet.’

Underlining the importance of top spot he adds: ‘It’s not just that finishing second you have to play a team that has dropped out of the Champions League, it’s the having to play two more games and with the work load that we have, that’s important too.’

The slog of matches before the World Cup has already left Real Sociedad with a lengthy injury list of attacking players that includes captain and Spain international Mikel Oyarzabal, David Silva, Japan international Take Kubo, and most expensive signing ever Umar Sadiq.

But that doesn’t meant they will be parking the Basque bus tonight and taking advantage of not needing the victory. ‘No, no, the objective is to win,’ Rico says. ‘We have to play our own game and go after them.’