The Holland international is hopeful of both the club’s and his own prospects under ten Hag, and will be excited to reunite with a manager under whom he enjoyed some of the best football of his career to date.

The midfielder, 25, also made it clear he wants to help the club improve after a disastrous season under first Ole Gunnar Solskjaer, and later Ralf Rangnick, as United registered their lowest ever points tally in the Premier League era. 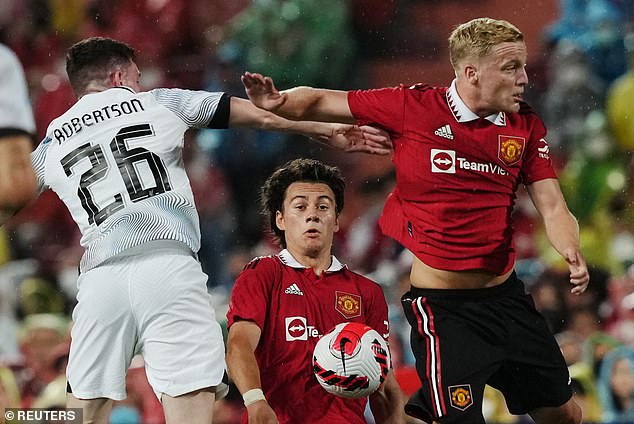 Van de Beek told the club whilst on tour in Bangkok of his ambitions next season, saying: ‘I think making as many minutes personally, as I can.

‘I think we need to improve as a team. If you’re looking at last season, we have a lot of things to improve and, if we work on that now, then we’ll see where we end up.

‘We will fight for everything.’

The 25-year-old was an ever present under ten Hag during his time at Ajax, and was a focal point of the Ajax side that stunned and entertained football fans across the world with their run to the Champions League semifinals in 2019.

But the Holland international was unable to recapture the form he showcased at the Dutch giants after a big money move to the Premier League and found himself slipping down the pecking order at United very quickly.

As a result he was sent out on loan to rivals Everton in January 2022 to get some minutes, but he suffered a succession of injuries and niggles which hampered his game time. 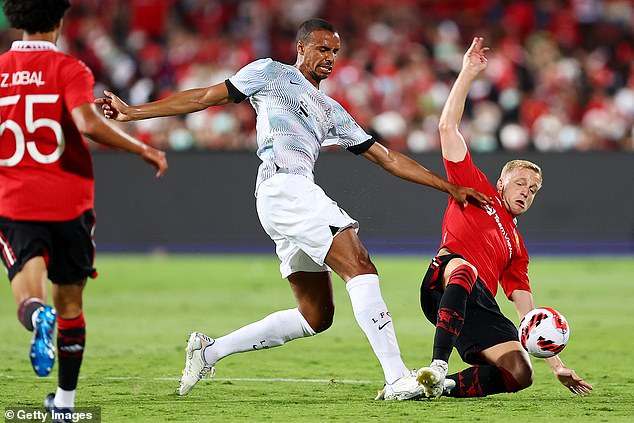 He added: ‘For my experience, I think [the Everton loan] was good. Obviously, I was a little bit unlucky with my injuries.

‘I missed a lot of games but to have that experience… it was not an easy season for the team, because we played to avoid relegation, which is not what you want for a club like Everton, but, overall, it was a good experience to be there.’

Van de Beek now has the chance to reignite his career at Old Trafford under a manager who oversaw 32 goals and 29 assists in 110 games at Ajax as he became one of Europe’s most wanted midfielders.