Danny Simpson recalls a story from the Huddersfield training ground. “I’d had a couple of days off,” he tells Sky Sports. “When I got out on the field, he said: ‘It is nice to see you out here’. I was thinking to myself: ‘Who is this cheeky little so-and-so?’ I liked that about him. He was confident. He had only been there a week.”

It is a curious little anecdote because it does not marry up with the usual description of Arsenal youngster Emile Smith Rowe. Most see him as a quiet boy. He has been called shy. But here he was, early into a loan spell at Huddersfield, calling out one of the senior players.

Any quietness masks the sort of inner drive and belief that one might expect from someone who made a loan move to RB Leipzig in the Bundesliga at the age of 18, moving far away from family and friends with the conviction that he could make an impact abroad.

If that was a growth experience off the pitch, Smith Rowe’s key period of development on it came in the cut and thrust of the Championship during the second half of last season.

His role in Arsenal’s win over Newcastle on Monday evening – one that included the assist for Bukayo Saka’s goal – came one year to the day after his Huddersfield debut. 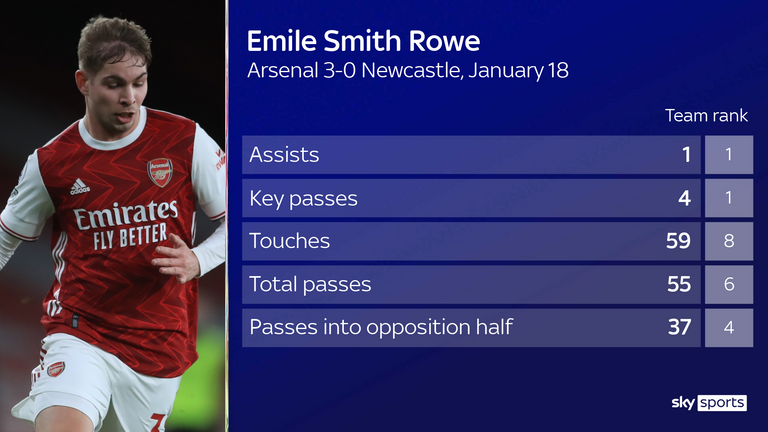 Back then, he found himself in the thick of a relegation battle with the Terriers but he soon helped them up the table. Mark Hudson was the club’s first-team coach at the time.

“He had a great impact,” he tells Sky Sports.

“You could see his talent immediately, his technique, his ability to speed the game up, take the ball on the half-turn. Because he is young and enthusiastic, he brings an energy and an ability to press as well. He is so intelligent with his movement.

“He drifts past people. He does not look quick but he is and it is with the ball which is brilliant. He naturally glides across the ground and he takes the ball in his stride. He has good vision and a good understanding of the game.

“You could see it in training.” Simpson was often the man having to mark him in those sessions and agrees. “You know what it is like, you could tell on the first day. We knew straightaway, pretty much.”

Not that he was about to go easy on him.

“You want to play against these lads and be up against them. I love all that. You want to make it as hard for them as players were making it for me when I was that age.” Simpson on search for new club

As he does so often with the ball, Smith Rowe took it in his stride. He was not at Huddersfield to show that he could hit those standards.

He was there to raise them.

“When he demands the ball it does not matter whether you are a senior pro or not,” says Hudson. “He knows where his runs are so if it’s not being delivered he will let you know. Anyone playing top-level elite sport has to have an edge and he has that.

“You could see that hunger to succeed. He is one of those who could be in the dressing room after a win having contributed a goal or an assist but he still wants more. You have to remind him to smile and enjoy the wins. He always wants to get to that next level.

“You see the standards that he expects of himself and others. He was 19 when we had him but he had expectations and a willingness to train at the best level every day. This is a player willing to go on loan, willing to go abroad, willing to try different things to succeed and never has a barrier.

“He is someone you can use as an example to other young players. He always knew he was going to be good enough to play for Arsenal in the future but he also knew the building blocks that he had to be willing to put in to get there. He has done that brilliantly.”

There were times when then Huddersfield boss Danny Cowley had to manage his minutes. After the restart in June, every other appearance by Smith Rowe came as a substitute.

“Obviously, with the robustness of the league, it is very demanding,” explains Hudson. “We were just getting him up to speed and protecting him at the same time. We were not going to just play him and flog him, we wanted to make sure we used him at the right time.

“He always wanted to know why. I don’t mean he was knocking on the door and being frustrated. He had the right mentality. He would approach the manager and want to know the reasons so he could know how to adapt and improve. He is a winner.” 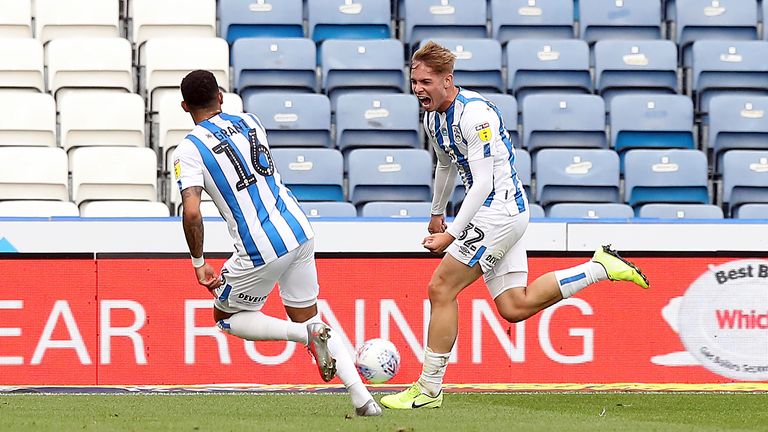 He proved that in spectacular style in his final home appearance for the club – coming off the bench to win the game against West Brom and all but secure Championship safety.

“That was a key goal,” says Hudson. Indeed, had they been beaten that afternoon, the subsequent final-day defeat to Millwall may well have been enough to relegate them.

It underlined Smith Rowe’s contribution – and his improvement.

“I think with any young player there is always going to be development, but you could see real progression with him. He is starting to add goals and that will come, 100 per cent.

“His stuff on the ball was excellent but we were also focusing a lot on getting him to work against the ball, which, in the Championship you need, and that came on a lot through the season. It is when to press, when he has got to pick a position to close passing lanes.”

Hudson sees him as a natural No 10 but there is some flexibility.

“He can make those forward runs so he can break beyond the striker and play either side. He can drift into pockets on the left or the right, he is not just pigeon-holed in one position.

“He would prefer to play in the centre but we played him off the left a couple of times. If you have a system with a wide-left player who comes in as a second 10 he can do that. If you are playing in a 4-3-3 and are looking for a No 8 stroke No 10 he can do that too.”

But whatever position he plays, it is going to be for Arsenal now.

“I watched the game against Crystal Palace and he was one of their best players on the pitch. He makes excellent runs. He has the ability to run beyond the front man into clever little pockets down the sides. He made three or four of those runs.

“He is growing into it and Arsenal are trusting him to do that. He has been coming on leaps and bounds. That is testament to him.

“Emile is going to be a very good player.”

As for Simpson, he too is going to be following the career of that ‘cheeky little so-and-so’.

“I am really happy for him. I tweeted him the other day and I spoke to him too. He is a good kid. He has been patient, he is getting his game time and he is showing everyone what he can do. He is only young, he is a baby, but he really believes in himself.

“I am excited to see where he goes from here.”

Back to back Super 6 winners?

EFL salary cap for Leagues One and Two scrapped

Barca presidential candidate Laporta 'wants Arteta as the next boss'