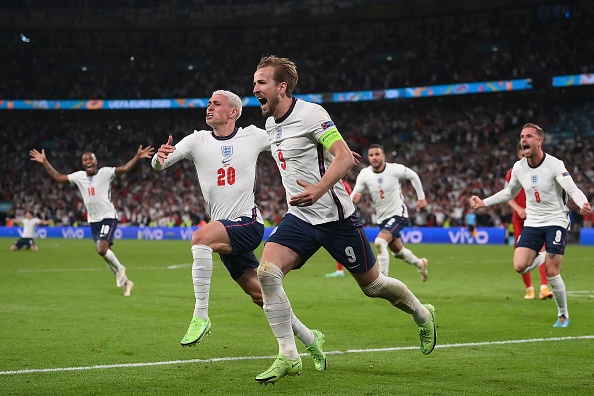 England have booked their place in the Euro 2020 final against Italy after beating Denmark at Wembley in extra time.

The Three Lions have reached the final of a major international competition for the first time since their World Cup triumph in 1966.

A large majority of the 60,000 in attendance were stunned into silence when Mikel Damsgaard struck a superb free kick from 25 yards out half an hour into the contest.

An own goal from Simon Kjaer, forced by Buyako Saka and Raheem Sterling, restored hope as an incredibly tense contest played out in the capital.

With the semi-final going to extra time, England’s moment came from the penalty spot when Joakim Maehle was judged to have fouled Raheem Sterling.

Harry Kane saw his spot kick saved by Kasper Schmeichel but the Tottenham forward buried the rebound to send Gareth Southgate’s side on their way.

Not a single direct free kick had been scored before tonight and few would have predicted Damsgaard to register the first in such devastating fashion.

Winning a second free kick from Mason Mount’s initial foul, the man filling the void left by Christian Eriksen struck a vicious effort over the England wall, beating Pickford and stunning the enormous home contingent inside the stadium.

Moments after the Danes spurned the chance to double their lead on the counter, Schmeichel was their savour – not the first time – denying Sterling from point blank range.

England came again however with Saka picked out down the inside right channel, sliding into Sterling only for Kjaer to get there first and divert past his own goalkeeper ahead of the Manchester City forward.

After a frantic end to the first-half there was a sense England needed to calm things down. The Danes settled the quicker in the second period with Pickford forced into a fine stop to deny Damsgaard’s snap shot – although the offside flag would be raised moments later.

It was then Schmeichel’s turn to produce heroics again, leaping across goal to beat away Harry Maguire’s head when the ball appeared to be already be past him.

It was time to gamble. The changes came 68 minutes into the draining contest with Jack Grealiah brought on for the impressive Saka.

England fans howled for a penalty when Kane went down under a challenge from Christian Norgaard only for the referee to award the free kick to Denmark – with VAR agreeing.

More heroics from Schmeichel denied Kane in extra time after his low drive across goal but there was no let up with Sterling brought down after his jinking run into the box moments later.

Schmeichel produced yet another stop but Kane reacted quickest to spark the celebrations and take England within one more win of glory.