But whatever happens, he says it can never make up for his penalty miss 25 years ago at Euro 96.

His shoot-out failure cost one of the most exciting England teams in years the chance to battle for major honours in the European Championship finals.

He has told his players to shrug off history when they run out at Wembley tonight – most of whom are to young even to remember the disappointment of Terry Venables’ side just falling short.

But that will not ease the England manager’s own personal sorrow.

“I always want to win matches which give the country excitement, enjoyment and a warm feeling when they go to work the next morning,” Southgate said.

“That is the opportunity we are blessed with. 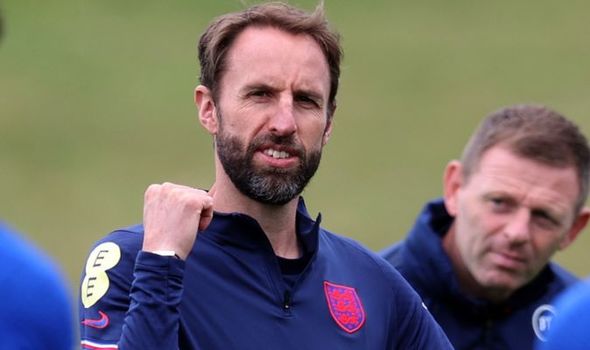 “Okay, I have an opportunity to do something now, but the team-mates I played with are the ones I think about the most for that fixture.

“I can’t give closure to them and that is something I have to accept.

“So I would not want to be claiming I can heal everything for everybody else because that just would not be the case.”

June 25, 1996: With the score at 5-5 in the Euro 96 semi-final shoot-out, Southgate fluffs his kick and Andreas Moller puts Germans in the final.

Nov 1996: Southgate stars in a pizza commercial with a paper bag over his head alongside Chris Waddle and Stuart Pearce.

June 1998: Played in 1998 World Cup coming on against Argentina but was not involved in the shoot-out.

Oct 2000: Kevin Keegan quit in the Wembley toilets after controversially picking Southgate in midfield and losing 1-0 to Germany.

June 2002: Travelled to Japan as part of World Cup squad but did not kick a ball.

March 2004: Came on as a half-time substitute against Sweden to win his 57th and final cap.

July 2012: Quits the role and rules himself out of becoming England’s technical director, too.

Aug 2013: Appointed England under-21 manager after a spell as an ITV pundit.

June 2015: Qualified for Euro Under-21s finals only to finish bottom of the group.

Sep 2016: Reluctantly took caretaker charge of the senior side following the departure of Sam Allardyce.

June 2019: Took England to the inaugural Nations League finals where they finished third.