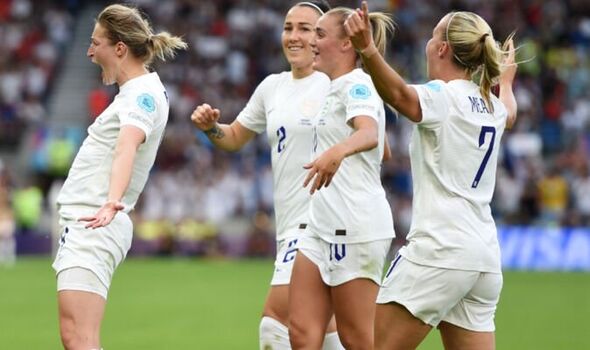 Henrik Ibsen. Thor Heyerdahl. Ole Gunnar Solskjaer. Roald Amundsen. Edvard Grieg. Erik the Red. Anna and Elsa from Frozen. Your girls took one helluva beating! Your girls took one helluva beating! Only the famous Norwegian commentator in 1981 could match the euphoria swilling around the Amex Stadium as England sent out a message to the rest of Euro 2022.

Norway coach Martin Sjogren tried to say the pressure was on England coming into what was supposed to be the crunch game in Group A.

Maybe so – but then Beth Mead simply cranked open the valve and the Norwegians were simply blown away.

It was an overwhelming show of the tireless work, intelligent vision and sharp finishing that, perversely, can make football look so effortless.

Although admittedly England were helped by a performance by Maria Thorisdottir that had Norway on the back foot from the start.

A clumsy foul on Ellen White and Georgia Stanway blasted the penalty into the back of the net. 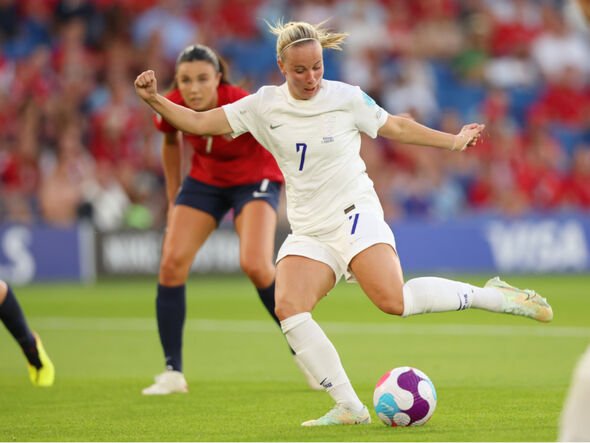 With Manchester City’s Julie Blakstad faring little better beside her, again and again England would go on to blow holes in the left side of Norway’s defence.

Mead jinked her way through in the 14th minute and although Laura Hemp’s finish was inexplicably flagged offside, VAR intervened to set the record straight.

Thorisdottir’s nightmare continued when White robbed her of possession to coolly slide the ball past Guro Pettersen.

It was also the Manchester City striker’s tenacity that led to the fourth, with Hemp taking advantage of the quick turnover to plant a perfect cross onto the head of Mead, whose effort was too powerful for Petterson to keep out.

Mead then waltzed her way through the Norway defence and fired into the corner for her second of the night and there was still time before the break for that inside-right channel to be exploited once more, this time Stanway running clear to clip the ball across for White to meet at the far post.

Her second goal of the night took her to within one goal of a certain Wayne Rooney at the top of the combined England goalscoring charts but there was to be no hat-trick as substitutions inevitably punctured the second half.

Norway played the second period with a back five – with a second line of four midfielders never drifting more than a few yards further up the field.

It left Ada Hegerberg, the global star with the potential to spoil England’s summer, frustrated and isolated in the centre circle as relentless England continued to pile that pressure back on Norway.

But if you can’t go through them, you have to go over them.

In the 66th minute a big looping cross from Lucy Bronze was nodded in at the far post by Alessia Russo – the first time a team has ever scored more than six goals in the Women’s European Championships finals.

Greenwood thundered a 20-yard shot against the bar but Mead was not going to be denied the match-ball and duly completed her hat-trick by reacting quickest to tuck in the rebound when Kiera Walsh’s deflected shot was saved by Pettersen.