Gareth Southgate is set to announce his England squad for the rearranged Euro 2020 on Tuesday, before holding a press conference at St George’s Park to explain his 26-man selection.

England will play Croatia, Scotland and the Czech Republic in Group D. All three of their games will be held at Wembley, as will the semi-finals and the final.

Before that, there are pre-tournament friendlies against Austria and Romania at Middlesbrough’s Riverside Stadium.

Uefa recently expanded the number of players in each squad from 23 to 26, opening three extra slots for Southgate, but he still has difficult decisions to make when selecting from England’s deepest and strongest talent pool in some time.

Our reporter Mark Critchley will be covering England at Euro 2020 and answered readers’ questions on what to expect from Tuesday’s squad announcement and how England might line-up at the tournament.

Here are a selection of the best…

Q: Do you think that Southgate has a cemented 30 players to pick from or is there space for a wildcard pick we all love to see, a la Joe Willock?

A: By now, I think Southgate knows who he’s picking. He’s said that he’s known the majority of the squad since November to be fair, and even though those names have chopped and changed somewhat since then, the chances of any late surprises are slim if you ask me.

Willock’s in great form and it would be a good story if he broke in but his performances have probably come too late for him to prove that it is anything more than a hot streak. Someone like Jesse Lingard is quite interesting, as he came back in March after a similar streak but has tailed off slightly since then.

Q: Southgate likes Raheem Sterling but also only selects players who play ‘week in, week out’. This has not been Sterling of late. Should Sterling go?

A: You’re right that Southgate likes his players to be playing regularly and to be in form and unfortunately Sterling doesn’t meet either of those categories at the moment.

He’ll definitely be part of the squad. Whether he starts is another question but he didn’t lose his place in March at the beginning of this dip that he’s suffering.

If Southgate goes with the 4-3-3 we saw in March, I can see Sterling starting on the right with Foden on the left and Kane through the middle but there’s a lot of competition in those positions so his place could come under scrutiny pretty quickly.

Q: How do you rate England ‘s chances? I see them going to the last eight to be honest…

A: It’s tough. This is the strongest and deepest talent pool England have had since the mid-2000s, I reckon.

I think a lot is going to depend on how the group shakes out. If they win it, they play the runners-up of Group F – probably France, Germany or Portugal. Any one of those three would be a huge test of their credentials and could see them crash out early.

I think quarter-finals is a sensible prediction. Semi-finals at a push.

Q: Jude Bellingham looks to be a star player, will he be selected and get game time?

A: I think Bellingham will be picked. He’s not 18 until the end of June but he’s starting regularly for the second biggest club in the Bundesliga and those performances against City woke people up to his ability back home.

He wasn’t included in the Under 21s Euros squad as that could have clashed with this tournament. I think that shows that Southgate thinks highly of him. Whether he plays probably depends on the fitness of others. I think we’ll see him in a few substitute appearances at least. 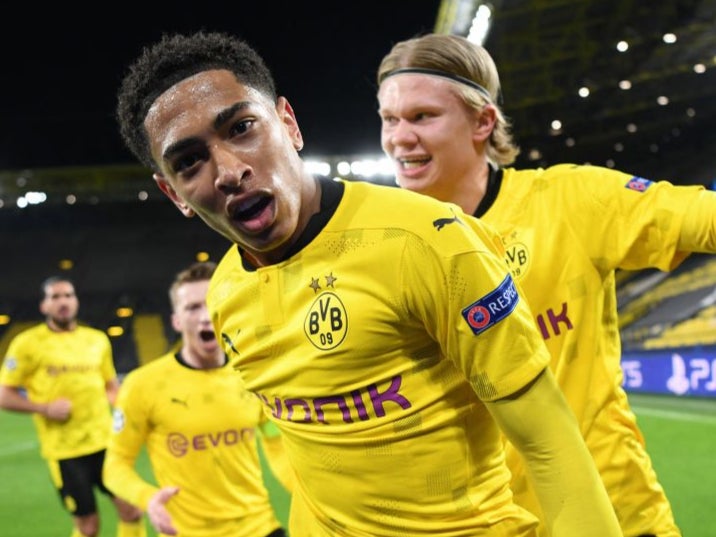 Bellingham has enjoyed a fine season with Dortmund

Q: Will Southgate suddenly become a decent tournament manager or shall we have to wait until the FA realises he is too cautious a man to change tactics during a game? What a waste of a fantastic crop of players.

A: Southgate’s had two tournaments and got to the semi-finals of both so he’s doing OK so far! I take your point though. A lot of fans think he’s been too cautious since the World Cup. I think that’s just part of the challenge he has in balancing a team that is heavy on attacking talent and light in midfield.

I agree on the game management point though. I think people overlook how that semi-final against Croatia was a huge missed opportunity and Southgate’s subs didn’t help. Throwing Vardy on to find an equaliser against a deep defence…

That in-game flexibility is one of the big questions about Southgate, I think, and we’ll know whether he’s learned from past mistakes later this summer.

Q: I’m bit worried we might suffer this tournament from having a pool of young talented players who haven’t been fully integrated and the 2018 favourites whose ceiling is limited.

It feels like there has to be a way to get Jack Grealish and Phil Foden in the team and that Trent Alexander-Arnold’s delivery is needed but its likely that Sterling, Kieran Trippier and Marcus Rashford will take those places.

As good a job Gareth has done, especially off the field in getting people behind the national team again, I wonder if the past three years have been wasted slightly as it seems his preferred XI would still be heavily based around the World Cup 2018 players…

A: Interesting points I hadn’t really considered before, Josh.

Let’s take the 2018 semi-final line-up. There’s between five and seven players – Pickford, Walker, Stones, Sterling, Kane and then Maguire and Henderson (fitness permitting) – that I can see playing against Croatia again for the first game.

That’s about what I’d expect between two tournaments, even given the extra year’s delay. A blend of players at peak age and others that are developing is a good mix, and I think Southgate is on record saying that’s what he’s been aiming for. I think Grealish and Foden both go and I wouldn’t be surprised if Foden starts.

Trent is a difficult one. I’d be surprised if he’s selected to be honest. If he’s left out, that’s going to be controversial and a mistake in my opinion but Southgate will have his reasons.

Q: Will Southgate play two central defensive midfielders given our centre back issues?

A: It depends on what you call defensive but if you’re asking me will he play Rice and Henderson together barring any injuries, then I reckon the answer is yes.

Some fans seem to be unhappy about that but I think you’ve got to remember he’ll also be playing a front three, Mount and two relatively attacking full-backs.

Henderson and Rice together offer decent protection for those centre-backs and Henderson in particular has been good at moving the ball up the pitch for Liverpool this season. I think there’s enough creativity in the side while still playing those two in the middle, provided you pick the right attacking players. 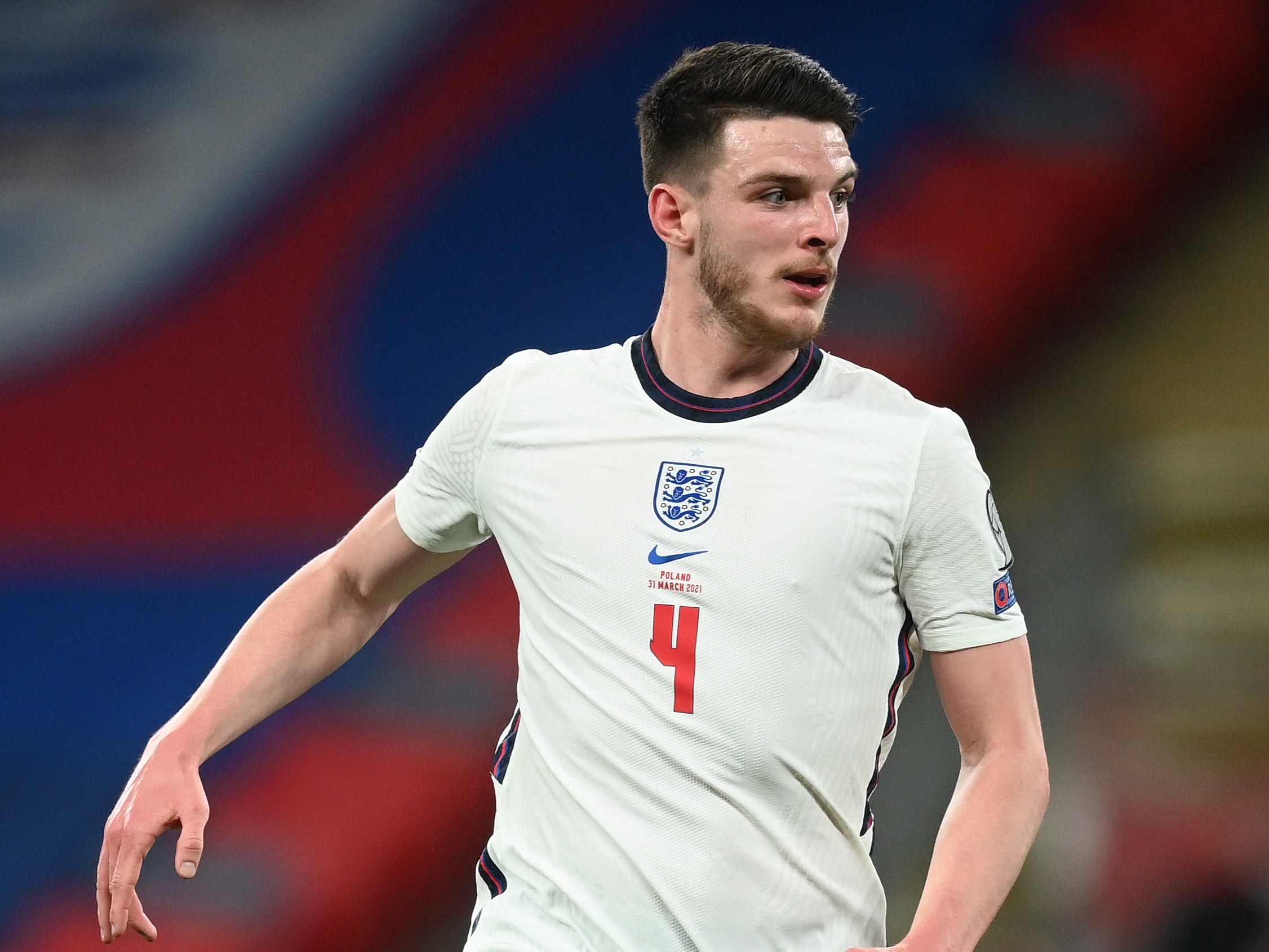 Declan Rice looks set to be a certain starter

A: I think he does, yes. He told the journalists that he has an XI in mind for the Croatia game after beating San Marino in March, but added that other players still had a chance to play their way into it too.

There’s a few spots I’m uncertain on and that doesn’t mean it won’t change further down the line or depending on the opposition, but that’s my half-educated guess for now.

Q: Given that England has one of the largest population to grow players from and that their domestic leagues are also large, its Premier League hailed as the best in the world, why is its national side only slightly better than country with a tenth of its resources, and given its easy qualifiers rarely gets past the quarters of most tournaments?

A: Thanks UnitedJock, I assume this question comes from north of the border!

I think those are all fair points. England is very similar to France and Germany in terms of resources to develop and produce players but not even half as successful. You can put that down to a lot of factors. I think a big one is a certain insularity and suspicion of new ideas. You look historically at how very few English players or coaches try their hand in different football cultures. That’s gradually changing. I think a lot of work has gone in at the FA into talent development too, over the past decade in particular. You can see that in the wealth of good young players coming through.

A single tournament is bad way of judging these things but I guess we’ll get a glimpse of what progress has been made this summer, especially when Scotland come to Wembley on the 18th!

Q: How about a song? This is what is missing and I will point out there are many football loving writers and musicians out there ready to help…

A: There hasn’t been an official England tournament song since 2006, Embrace’s ‘World at Your Feet’. A terrace anthem, it was not.

As far as I know, there are no plans for another but I think having no official song but a lot of unofficial ones has worked fine. And we all know Three Lions will get back into the Top 40 on the back of Spotify streams alone anyway.