Tottenham Hotspur’s damaging home defeat to Aston Villa was not the end-of-season send-off supporters had been hoping for.

10,000 fans were allowed inside the Tottenham Hotspur Stadium to watch the club’s final home match of the campaign, which ended with the players being booed off at the full-time whistle.

It was Spurs who took the lead in the contest courtesy of Steven Bergwijn’s well-struck effort, but two Sergio Reguillon errors saw the hosts concede twice to Dean Smith’s side to lose the match.

Reguillon’s first mistake resulted in him slicing the ball into his own net, prompting a strong reaction from Eric Dier.

After watching the Spaniard slump to the floor, Dier was seen hauling his teammate off the ground to shake off any self-pity he was feeling, as reported by football.london

JUST IN: Harry Kane drops clearest hint yet he will quit Tottenham this summer 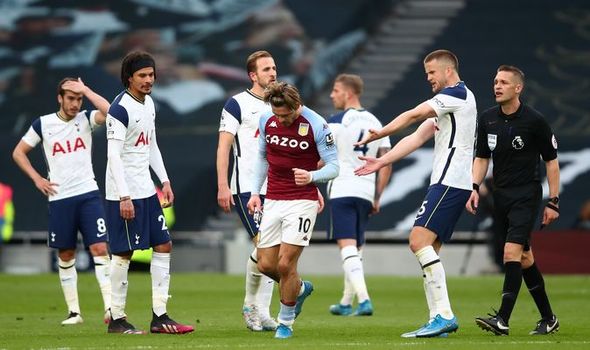 But Reguillon was at fault again 19 minutes later as he saw a poor pass intercepted by Bertrand Traore, leading to Ollie Watkins putting Villa ahead in the game.

Dier was also seen showing his leadership qualities at other points in the match, encouraging other teammates to take responsibility.

Sky Sports pundit Chris Coleman spotted the English midfielder having words with Harry Winks after Jack Grealish was afforded time and space to have a shot at goal.

“You can see there. Eric Dier is having words with Harry Winks,” said Coleman.

“He’s saying that the shield in front of himself and Toby Alderweireld is not good enough. Grealish is getting in the space in front of the centre-backs and you don’t want that to happen. Eric Dier is asking for a bit more protection.”

The actions of the former Sporting Lisbon man throughout the match showed once again how he continues to lead by example during times of difficulty for the club.

Should Harry Kane move on this summer, Tottenham may well already have found their new vice-captain.

Despite Dier’s efforts to galvanise the group, Smith’s side were worthy winners on the night.

Tottenham interim boss Ryan Mason expressed his disappointment at Spurs’ lack of discipline during the course of 90 minutes as he provided his assessment of proceedings at the full-time whistle.

“Disappointing. We started the game brightly, unfortunate circumstances for their first goal and they didn’t have to earn the second one either,” he told BBC Sport.

I didn’t think there was much in the game, just those moments. When you make an unfortunate mistake as we did it gives them a good feeling. We tried to break them down but didn’t take those crucial moments.

“It was just about trying to keep our discipline. We lost our shape at times. It was about trying to stay patient and calm. They had pace on the counter and were always a threat. It is a disappointing evening.”