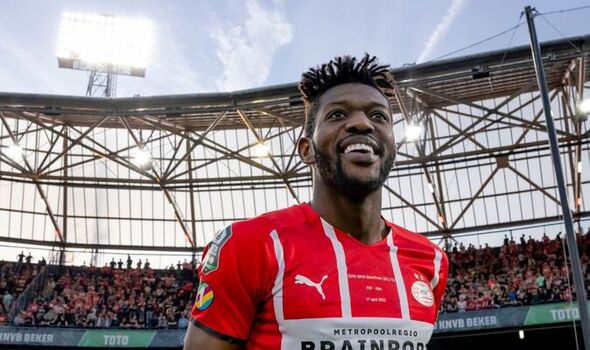 Manchester United’s new manager Erik ten Hag can provide those he leaves behind at Ajax with the perfect parting gift – by signing one of PSV’s best players in combative Ivorian international Ibrahim Sangare. The 52-year-old tactician helped his current side pip their rivals to the Eredivisie title on Wednesday night, following a 5-0 demolition of Heerenveen in Amsterdam.

Yet despite remaining in control of the race, PSV have refused to go away, remaining hot on Ajax’s tail.

It’s brought the best from Ten Hag and his players, who have been pushed to their limits in pursuit of glory – a third Eredivisie title under his reign and a fitting finale for the Dutchman.

But the celebrations didn’t last long and Ten Hag is already preparing to get his teeth stuck into his new project after meeting with United’s football director John Murtough in Amsterdam on Thursday.

Together with Steve McClaren, the pair are believed to have discussed United’s recruitment strategy ahead of the summer transfer window.

Interim boss Ralf Rangnick, who is set to move upstairs into a consultancy role, has already ruled that United could sign up to 10 new players before the start of the 2022/23 season, with five already set to depart in Paul Pogba, Edinson Cavani, Jesse Lingard, Juan Mata and Nemanja Matic.

One underwhelming department in desperate need of a revamp is central midfield, where United have already been light on the ground this season.

It’s understood that at least two new signings in that area will be targeted, with both a defensive midfielder and box-to-box player high on the agenda.

And if United are to show their nous and truly mark the start of a new, exciting era under Ten Hag – they must avoid repeating the same old mistakes in the transfer market.

Whenever United shop big and target a high-profile name, they become locked in a game of cat and mouse during negotiations before eventually paying over the odds.

But if there’s one man who has already proven he can operate without a mega-budget – it’s Ten Hag, who also knows the Eredivisie like the back of his hand.

With that will come the knowledge that PSV midfielder Sangare is more than ready for the Premier League, having already been tracked by the likes of Arsenal, Newcastle, Leicester and Aston Villa in recent months.

The 24-year-old is developing at a frightening rate and was already high-regarded during his time in France with Toulouse but no English club was brave enough to take a punt on his potential, despite extensive scouting.

Now Sangare’s stats do the talking with the Ivory Coast international averaging 3.3 tackles and 2.5 interceptions per 90 minutes in the Eredivisie this season.

Sangare has been a key, decisive component in Eindhoven ever since he arrived last summer, winning the KNVB Cup in his first season in Holland.

However, it’s already become clear that PSV will have their work cut out trying to keep hold of his services, with Sangare’s performances already outgrowing the club.

United would seemingly be the ideal destination for the player, who has already outlined his “dream” of playing in the Premier League, given the club are set to embark on a period of transition, which is likely to ease the pressure on his shoulders.

The Red Devils have not had a midfielder of his ilk since Matic first arrived at the club in 2017 and the Serbian has struggled to replicate the levels of performance he showed during his time at Chelsea, where he won two Premier League titles.

Yet as we’ve seen with the likes of Fabinho at Liverpool and Rodri at Manchester City, these kind of unsung, selfless heroes are imperative to their team’s success.

United do not know what it’s like to have a player holding it all together at the base of midfield, instead, they’re used to their players wreaking havoc and encouraging games of basketball.

That ultimately cannot happen if United are to have aspirations of becoming top-four regulars and beyond that, title challengers again.

If Ten Hag can also weaken PSV for Ajax while ticking an important box on his United checklist, a move for Sangare makes so much sense for more reasons than one…