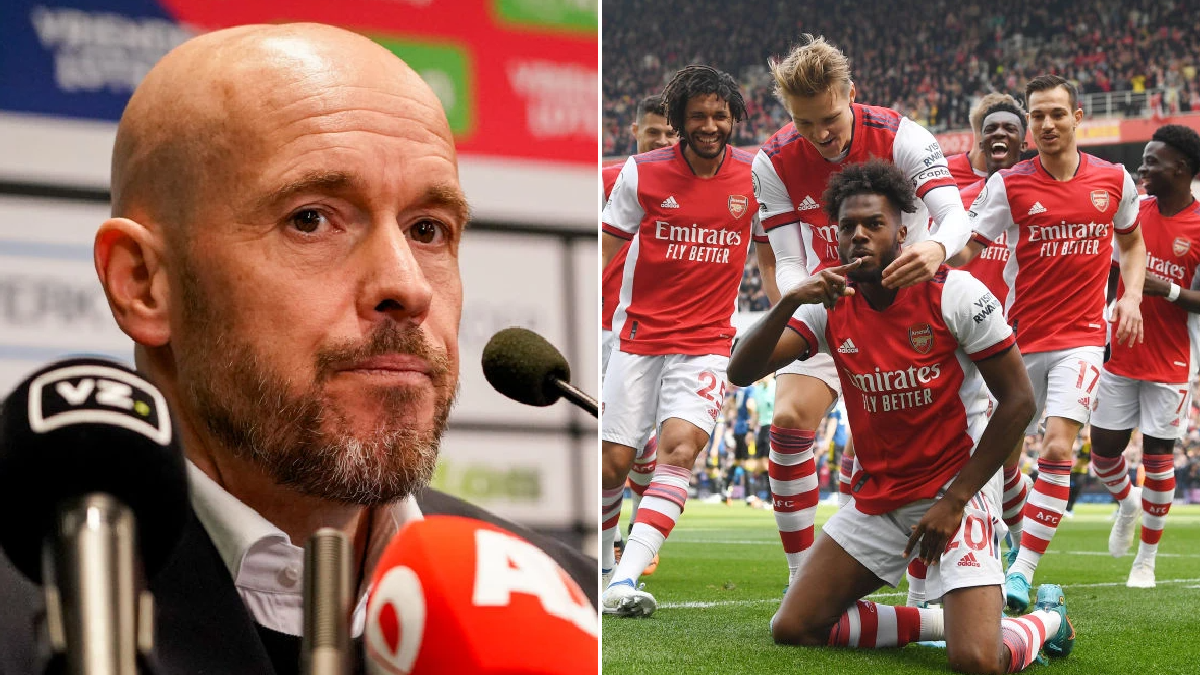 Erik ten Hag insists he was paying no attention to Manchester United’s performance against Arsenal on Saturday and was only focused on getting a result with Ajax.

The Dutchman was officially confirmed as the new United manager on Thursday and will take over the reins at Old Trafford once the season is over – though first he still has to secure the Eredivisie title with his current club.

Ajax had lost the Dutch Cup final against PSV last time out but bounced back against NEC on Saturday with a narrow 1-0 win that maintains their four-point lead at the top of the table with four games left to play.

But shortly before Ajax kicked off, Ten Hag’s new club were taking on Arsenal at the Emirates and suffered another disappointing defeat which effectively ended their hopes of playing Champions League football next season.

United lost 3-1 in north London, with Bruno Fernandes missing a penalty that would have tied the scores before Granit Xhaka put the game to bed.

But Ten Hag insists he was not in any way distracted by United’s match against Arsenal and was fully focused on Ajax’s match against NEC, while he had no thoughts on his new club likely missing out on the top four.

Asked about United’s defeat and the ramifications, Ten Hag responded: ‘I don’t have an opinion about that because I show respect for the people who are at Man United now. And, as I’ve said, I am responsible for Ajax and that is what I give comment on.’

Asked if it is hard to focus only on Ajax, Ten Hag continued: ‘I always keep concentrated and focused on the job I have to do, it doesn’t matter what’s around me.’

Probed further on whether he had spent any time planning for his move to Old Trafford, the 52-year-old added: ‘Yes but you always spend time on the future. But my head and my energy is for Ajax.’

Ten Hag has a massive job on his hands at United when he officially takes over, with midfielder Scott McTominay offering a scathing assessment of the state of the club following the loss to Arsenal.

Speaking to BT Sport, he said: ‘There are a whole load of problems in terms of players, staff and everything higher up. But for us, when you get home and take a look in the mirror, you can’t be satisfied conceding three at Arsenal when we deserved to win the game.

‘We had a half-decent game today but the belief, so big in football, it’s just not there at the minute. The last four games are about pride for us. We have to finish as well as we can do. When the new coach comes in we need to be ready for everything.’

Has Lionel Messi played his last game for Barcelona?