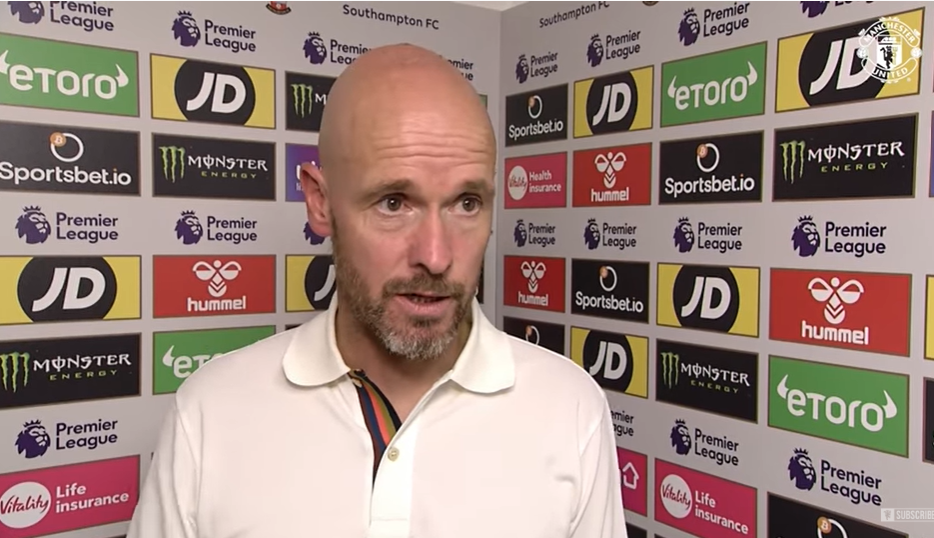 Erik ten Hag says there is ‘room for improvement’ after Manchester United clinched a narrow victory over Southampton at St Mary’s.

United endured a miserable start to the campaign, losing at home to Brighton on the opening day and then suffering an embarrassing 4-0 defeat at Brentford.

But Ten Hag’s side stunned Liverpool last week and made it back-to-back victories with a 1-0 win over Southampton today.

United were not at their best but edged a cagey affair thanks to Bruno Fernandes’ second-half volley.

Ten Hag was pleased with his side secure three more points and climb to sixth in the Premier League but said he craved more ‘control’ as Southampton repeatedly threatened to equalise after Fernandes’ opener.

He said: ‘I think the players learnt some lessons from Brentford. We were more compact on the long balls. Of course we were really happy.

‘The goal we created, we could have made more. You hope to have more control in the last 30 minutes of the game.

‘Before half-time we already had the best chance of the game. I was satisfied. At the start of the game we could have created more.

‘It is the start of the season, it is tough. You have to battle and we did that today so we were rewarded.

‘I still feel there is room for improvement, to control more, but we are not that long in our way. We can improve that is clear.’

Southampton boss Ralph Hasenhuttl, meanwhile, felt his side ‘deserved more’ as they slipped to a second defeat of the season.

‘I’m very proud of what the guys did today,’ Hasenhuttl said. ‘They did a really good job from the first minute.

‘We had good moments and chances, we really stretched them. We deserved more but sometimes football is like this.

‘We had very good moments and a lot of good chances in the box. They had two shots on target in the second half.

Manchester United return to action on Thursday against Leicester City, while Southampton face Chelsea on Tuesday.

Barcelona defeat another painful reminder of what they once were