Erling Haaland celebrates his second goal of the night

Erling Haaland scored twice for Borussia Dortmund to reach the Champions League quarterfinals in a heated 2-2 draw with Sevilla.

Haaland took his season tally to 10 goals for Dortmund to progress with a 5-4 win on aggregate. The Bundesliga team won the first leg of their last-16 tie 3-2 in Seville, where Haaland also scored two.

The Norwegian has 20 altogether in just 14 appearances in Europe’s premier tournament in his young career, and he was the key factor in Dortmund advancing.

Youssef En-Nesyri scored twice for Sevilla to set up a dramatic finale.

The visitors attacked from the start and had Dortmund pinned back for much of the opening 30 minutes. Lucas Ocampos tested Dortmund goalkeeper Marwin Hitz early on before playing the ball through Emre Can’s legs to set up Suso, who fired narrowly wide. 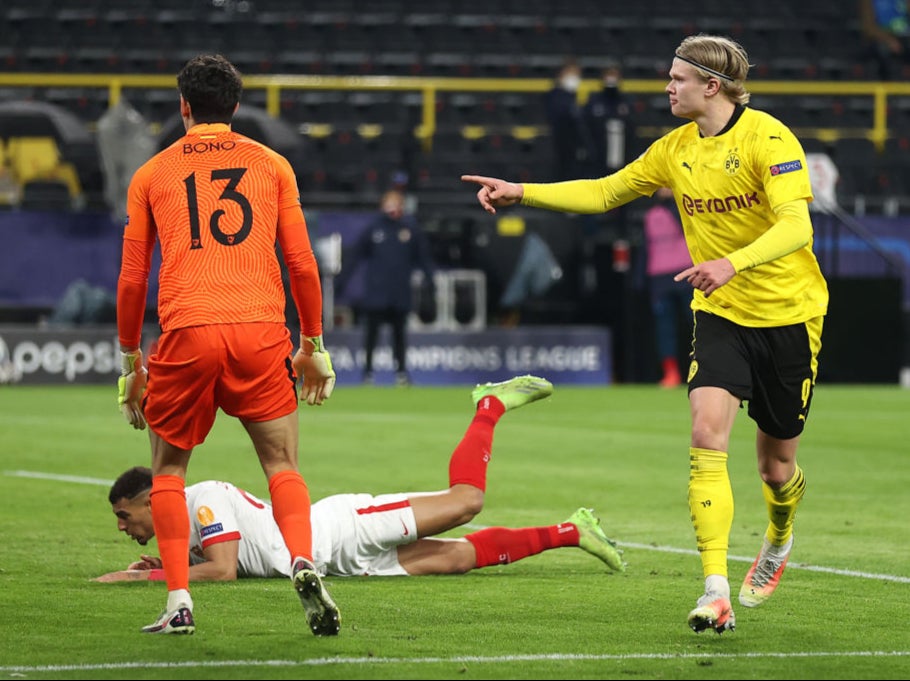 Dortmund’s defenders were desperately just booting the ball away as the pressure continued, but the home side capitalized on some indecision in Sevilla’s buildup play for Haaland to score in the 35th minute with Dortmund’s first real chance on a counterattack.

Thomas Delaney muscled Jules Kounde off the ball, and Nico Schulz passed it to Mahmoud Dahoud, who played a fine ball for Marco Reus. The Dortmund captain stayed cool in front of the outrushing Sevilla keeper and cut the ball back for Haaland’s easy finish.

Sevilla’s frustrations and Dortmund’s confidence grew in tandem after the goal, but there was still time before the break for Fernando and Ocampos to try their luck.

Haaland displayed remarkable strength and precision to score his second after the break, but the goal was taken back through VAR — likely because Haaland was adjudged to have fouled Fernando, whom Haaland bundled over with his shoulder — and a penalty was awarded for an earlier infringement on the Norwegian by Kounde, who had been pulling his jersey for a Reus cross.

Yassine Bounou — the Sevilla goalkeeper who is known as Bono — saved Haaland’s penalty, then the forward’s second effort from the rebound, but VAR intervened again and ordered another penalty as Bono was marginally off his goal line.

Haaland scored at the second attempt — third including the disallowed goal — in the 54th and was then booked for taunting the goalkeeper with his celebration. Several Sevilla players ran after the forward and referee Cuneyt Cakir had to work to keep tempers in check.

Then Can conceded a penalty for a foul on substitute Luuk de Jong.

En-Nesyri hammered the spot kick in off the underside of the crossbar in the 69th to set up a nervy finale. Sevilla still needed two goals to force extra time, but had already proved capable of scoring them in the first leg.

Diego Carlos was fortunate to escape with a yellow card for catching Haaland in the face with his arm. Tempers continued to fray and the bookings continued. Cakir managed to avoid sending anyone off.

En-Nesyri scored in the sixth minute of injury time but it was just too late for Sevilla.