Zenit St Petersburg’s matchday vaccine initiative demonstrates that the Krestovsky Stadium is ready to accommodate thousands of fans for the European Championships this summer, according to the club’s president Alexander Medvedev.

The reigning Russian Premier League champions, who are four points clear at the summit with seven games to go this season, began inoculating their supporters with doses of the Sputnik V vaccine prior to the 4-0 win over Akhmat Grozny on March 13.

As well as cheering on Sergei Semak’s team as they challenge for a third league title in a row, fans have been given the chance to receive their jabs at the medical centre on the third floor of Stand C on each matchday until the final home fixture of the season against Lokomotiv Moscow on May 2.

Starting two hours prior to kick-off, Zenit supporters over the age of 18 are eligible for an injection as long as they bring a passport and a national health card and they are required to see a doctor or nurse before undergoing the procedure.

This comes after UEFA president Aleksander Ceferin stated earlier this year that vaccine efforts will determine if European football’s governing body sticks to its original programme for Euro 2020.

With a final decision on the host cities for the tournament expected on April 20, the sentiment from UEFA towards seeing supporters attend matches again is welcome for Zenit and their 68,000-capacity stadium, one of the locations which were originally chosen to host games.

Ceferin has ramped up expectations concerning seeing supporters in stadiums, declaring that “every host must guarantee there will be fans at their games” ahead of the first-ever pan-European edition of the tournament, which will start on June 11.

“Football with no noise and no faces of the fans is small compensation for the absence of the fans.

“Now we have a capacity of 25,000 [at Russian Premier League games] and we are looking forward jointly with the medical authorities that we can prove that it will be safe that not only 25,000, not full capacity, but maybe 40,000 to 50,000 fans could come [this summer].

“It would make this year’s European Championships a really big event which will bring the beauty of football not only through television or through the internet but by being there.

“Football players, and I know this from our team, they play for the fans. And when we didn’t have fans they really lacked this support.” 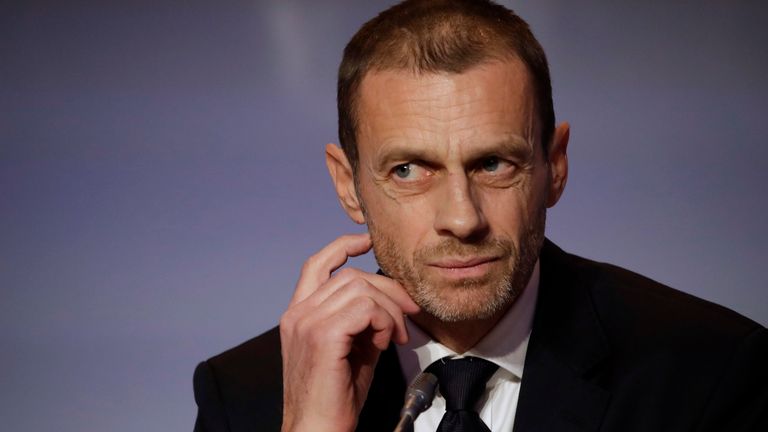 Coronavirus restrictions have prevented Russian top flight stadiums operating at full capacity during the 2020/21 campaign, but despite the health risks, thousands of supporters have been permitted to watch live sport in Russia during the pandemic.

Like many leagues in Europe, the Russian Premier League was suspended from March to June last year, but the final eight rounds of fixtures in 2019/20 were played in front of a small number of supporters with the limit capped on 10 per cent of any stadium’s capacity. 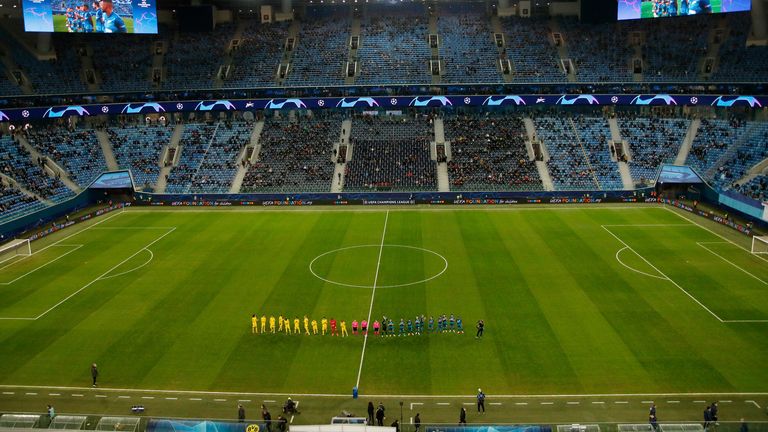 This season, despite some regions imposing their own jurisdictions on stadium capacities, attendances have gradually increased in accordance with health regulations, and Zenit’s average home attendance stands at over 17,500. Supporters are required to wear masks in stadiums and comply with health protocols on matchdays.

Over 30,000 fans watched the Russian Grand Prix in Sochi last September and 10,554 watched Chelsea beat FC Krasnodar away in the Champions League group stage a month later. The government’s sports minister Oleg Matytsin has maintained that sport should not be left without spectators so that the atmosphere remains intact in Russian stadia.

The Krestovsky Stadium staged some enthralling fixtures at the 2018 FIFA World Cup, including Russia’s 3-1 win over Egypt and Argentina’s late 2-1 triumph against Nigeria in the group stages, as well as France’s 1-0 semi-final victory versus Belgium, which were all played in front of over 62,000 fans.

Zenit’s president insists the club is not carrying out a vaccine programme for good publicity, but as part of a Europe-wide effort from governments, health authorities, football associations and clubs to ensure life can return to some semblance of normality for football fans later this year. While the full houses of the World Cup two-and-a-half years ago might seem out of reach for the time being, he desperately hopes that fans can get the go-ahead to return to watch international sport at Euro 2020.

Medvedev added: “We believe that it is the right thing to do because when you look around Europe it is difficult to find fans in the stadiums and the situation is not easy everywhere. But one year ago playing football with fans was not allowed.

“And then the fans came back to the stadiums with all the measures in place which were prescribed by the medical authorities – individual defence measures, temperature checks, and so on and so forth.

“But we are doing it not for glory, but in order for our fans to feel safe and besides individual measures, vaccinating is an obvious means from defending the population from coronavirus, especially in the future with the European Championships.

“We really hope that all 12 cities will be in a position to have matches with the fans and vaccinations is one of the important measures which could help to get clearance for the fans. And there is not a long time left before the start of the Championships.” Over 1700 miles away from St Petersburg in the UK, fans are set to return to sporting events, in limited numbers, from May 17, as part of the government’s roadmap out of lockdown, with “certificates” being considered as a way of getting people back to larger events “in significant numbers”.

Premier League chief executive Richard Masters says the final two games of the season could see up to 10,000 fans attending.

Amid vaccine rollouts currently being conducted at varying speeds across the continent ahead of Euro 2020, Israel’s FA offered venues to stage tournament matches but their offer was declined by UEFA.

UK prime minister Boris Johnson also claimed Britain had made a similar proposition, despite the FA saying later saying there are no plans to propose hosting further European Championship games if other countries cannot.

Reports have recently suggested Glasgow and Dublin could be dropped as host cities for the 24-team showpiece over possible crowd numbers due to Covid-19 restrictions.

Meanwhile, the Romanian football association has said authorities have agreed in principle to have 25 per cent capacity at the Arena Nationala in Bucharest for the tournament. Munich’s mayor Dieter Rieter believes it is too early to make a statement on whether the Allianz Arena can admit spectators in June and July.

“We are open because football is an international sport and everywhere we would like, and it doesn’t matter which country or continent [it is], a joint fight against coronavirus that will bring results,” Medvedev added.

“We are ready to share our experience of conducting matches, preparation, how to arrange catering in the stadium, how fans are leaving the stadium – because it is all quite different from the previous seasons.

“The first results will be to allow public events in sport, in cinemas and theatres and in restaurants to celebrate the victories of our favourite teams.”

We couldn't have done it without you! 💙👏 pic.twitter.com/c9wTCjNQhv

Take-up of the vaccine in Russia has been slower than in other countries, with polls showing Russians are sceptical of the domestically produced Sputnik V inoculation.

Deputy prime minister Tatiana Golikova said two weeks ago that five million people had received their first shot, out of a population of 144 million. Over 92,000 people have now died in Russia from the virus.

Sputnik V is 91.6 per cent effective against coronavirus when two doses are given, according to peer-reviewed results from most recent trials, and researchers have claimed it produces strong results against new mutations of Covid-19.

Zenit’s president wants to help fight against the scepticism and encourage Russians to be guided by science when it comes to getting their Covid-19 vaccinations, starting with the club’s own supporters. 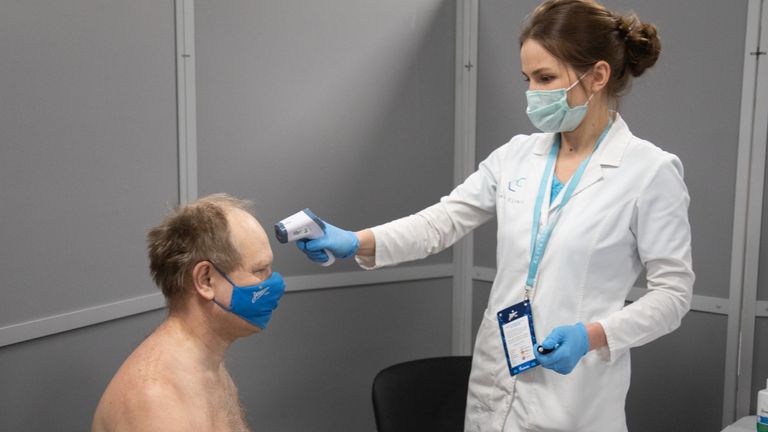 Medvedev added: “Some people didn’t use this possibility [get a vaccine before Zenit played Ahkmat Grozny], but were interested and that is why it is important that public media and television will highlight it. We will continue to do this vaccination on April 5 in our next match against FC Khimki.

“Unfortunately there are a lot of wrong rumours about vaccines around the globe. And as we know, it is easy to write about bad things and scandalous things and not good stories. I am completely open to saying that it doesn’t matter which vaccine is used, but vaccinations are the right thing to do.

“All the vaccines have a high success rate and it doesn’t matter if it is 92 per cent or 86 per cent but the most important thing is that it works. As soon as mass vaccinations can happen, we will be able to go back to normal life.

“We see that people are tired and we are not afraid to spend money to take these necessary measures because we are looking forward to life coming back to normal and in a stadium, we will have a full capacity of 60,000 (again).”

Who has made it to Euro 2020 and how will the tournament work?

Coronavirus has put Euro 2020 back a year to 2021, but 24 sides will still play across 12 host cities in a festival of football.

The top two teams from each of the 10 groups qualified for Euro 2020 and the four remaining positions were settled in the play-offs, with Scotland beating Serbia in a penalty shootout to join England and Wales at the tournament.

Here is the confirmed schedule so far.

The 16th UEFA European Championship runs from June 11 to July 11, 2021, and to celebrate the tournament’s 60th birthday, 12 cities across the continent have been selected as hosts. The 12 cities and stadiums are:

Rome’s Stadio Olimpico will host the opening match on June 11, while England’s national stadium Wembley will stage both semi-finals and the final.