So much about ‘The Super League’ still remained uncertain on Monday morning, with many bracing themselves for a huge legal battle amid utter shock across the game, but key figures at the top of the sport were very clear on where the blame lies.

“This is an American takeover of football,” was the sentiment of a series of figures involved. “Unbridled American greed” was another comment. The feeling is that this – probably the most significant moment in the game’s history – is ultimately an attempt to finally bring the sport’s version of the NFL, a closed shop and guaranteed income for a group of super franchises. Everyone in England was pointing to the owners of the big six, especially Manchester United and Liverpool, but the hierarchies of Real Madrid and Juventus were just as influential.

Andrea Agnelli was chairman of the European Club Association but did not attend what was a furious and fractious meeting on Sunday night. He has resigned his position, with the so-called founding 12 also leaving the body. It would probably be difficult to get other “stakeholders” to the same table in any case. The initial reports of this breakaway caused such a shock, that the talk is of irreparable relationships, and a total breakdown of trust right across the game.

This points to the deepest and farthest reaching consequence of this controversy, that has so many ramifications.

Football is facing up to a split that has been seen in so many other sports, but that it had somehow managed to avoid for its 150-year history.

The great global pyramid – that goes from the lowest grassroots club to the very top of the sport, and that gloriously crafted World Cup trophy – is to be smashed. The sport’s unique unity is to go, undermining one of its most joyous qualities.

Football’s great beauty is that it can be played by anyone, and has spread to everywhere in the world, to become one of the most popular cultural pursuits in history. That is no exaggeration, given the amount of borders it crosses.

It is about to close up at the top end, going against the very spirit of the sport.

That is why prominent figures are describing it as “the end of football” as we know it, and an “act of war”.

The unpalatable truth is that many of the most aggrieved – from those in the Premier League to some decision-makers at Uefa, and countless others over the last 30 years – have been at least partly responsible for making this inevitable, arguably even logical.

That doesn’t mean this is good, or anything to support. It is not.

It is just a reality that football’s embrace of hypercapitalism, and almost total lack of forward-thinking regulation, set in place circumstances that made this inevitable. The mechanisms were put in place so a particular group of clubs were going to bloat to such a commercial size that they would outgrow the game. It is why the sport has become attractive to sportswashing states and all manner of political interests, because of that capital. The sport was already becoming grossly disrupted, and distorted. It was in February 2020 that this very publication wrote football was “broken beyond repair”. 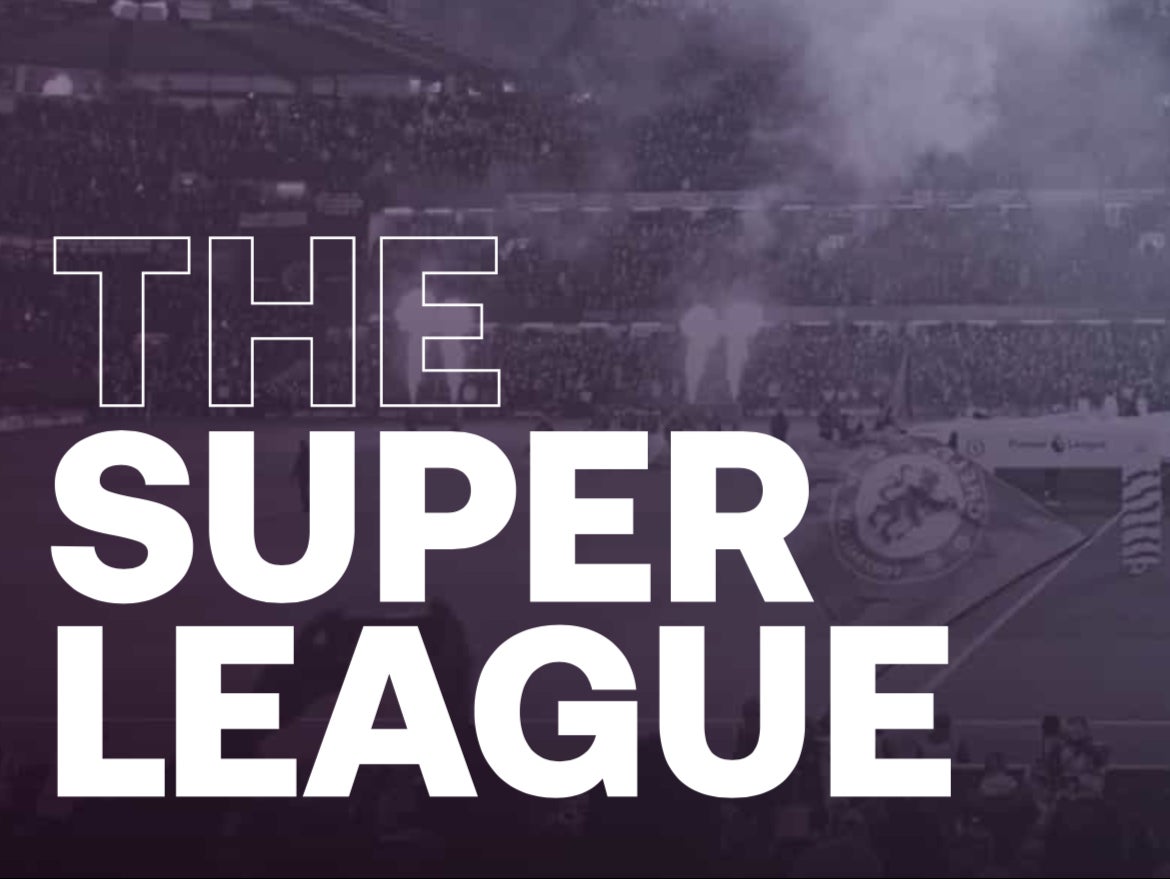 Huge problems needed to be fixed. But can this “solution” – the term is used sardonically – even work?

There are still huge questions about how it will all run, and even get started.

Uefa and the domestic leagues will now battle this in the strongest possible way, having condemned it in the strongest possible terms. Clubs could be banished from existing competitions, and there is the threat for players that any participation could see them banned from international tournaments. Nothing is off the table, at what might be a point of no return. It is at least possible that clubs could be thrown out this week, or even that the season could be suspended. Uefa may have to crown one of these three clubs as European champions next month. A potential final sick joke.

Sources in the Uefa already believe the plan will fail legal challenges, and some figures in the EFL were broaching the idea of the UK government using existing legal mechanisms to force compulsory purchases of the Big Six because the plan goes against the interest of British business.

Politicians have come out against it in strong terms, too, and it will be difficult to get any broadcasting deals done across multiple markets without the approval of individual governments.

Some involved maintain there is so little substance to the plans, that it must still be “a negotiating position”. There was something darkly comic about the mask finally slipping, but these same clubs – and figures like Florentino Perez – talking of wanting to “help football at every level” amid the most bare-faced act of greed in the game’s history.

The statement expressed the desire to work “with all stakeholders, particularly supporters, as plans for the competition develop” but many want nothing to do with them. They now just want punishment.

So much still has to be sorted, from where it will fit in terms of pyramid of players, to the broadcasting model; top to bottom. And what of other, longer-term unknowns? Will traditional support bases go along with this? Could this allow clubs to finally become franchises, and leave their historic locations? It’s all up in the air. The crack in the ground is that great.

One of the most significant statements may actually be one of the weakest, though. That was Fifa’s mild “disapproval” of the plans, which was quite a remove from the fire and brimstone everywhere else. Throughout Sunday, many figures argued that it would be “foolish” to do this without the endorsement of the global governing body.

Suspicion reigns. Some believe it would fit with Fifa’s plans to create a club tournament to rival the Champions League, and claim some of the immense revenue it generates. That remains to be seen.

It does reflect that, through sheer force of size, and size of fees involved, the obstacles can be removed. The clubs are that big, the money involved that huge. As an illustration of how it can start, key figures believe that government opposition can be eroded through the promise of huge solidarity payments to the rest of the game, and the opening up of five positions at the bottom of the competition itself. 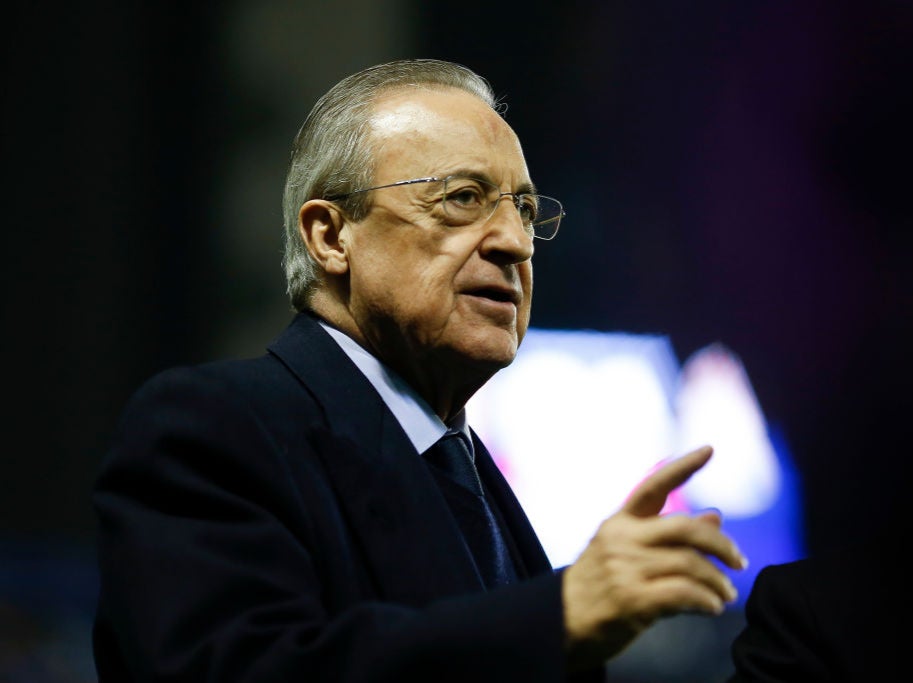 Real Madrid president Florentino Perez has been a key backer

The clubs are also said to be “100% committed”. In England, as an example, the dissatisfaction with the direction of the Premier League is that great. The ‘Big Six’ have no confidence in its development, and grew frustrated with its leadership from the start of the Covid crisis. The context of real-life tragedy and real-world problems of course add another layer of distastefulness to this. Of course, the statement even makes mention of that.

The Spanish giants have meanwhile long angled for this. As far back as 2014, one director was in a London hotel openly telling people that “Barcelona and Real Madrid have no interest in playing the likes of Osasuna and Athletic Bilbao”.

And there is a key point to that, too.

The confidence on the other side is that too many people are interested in watching the super clubs. They are certain everyone will eventually tune in, that all opposition will be eroded; that it is too glamorous a proposition.

Is that fanciful? A step too far?

A further irony of this situation is that, just as football’s historic structural unity has been smashed, ‘The Super League’ has served to emotionally bring the game together in a manner never seen before. Criticism elsewhere has been universal.

The talk now is of a Rubicon moment, a point of no return. If so, this plan still has a long way to go.

The end of football as we know it is only starting.