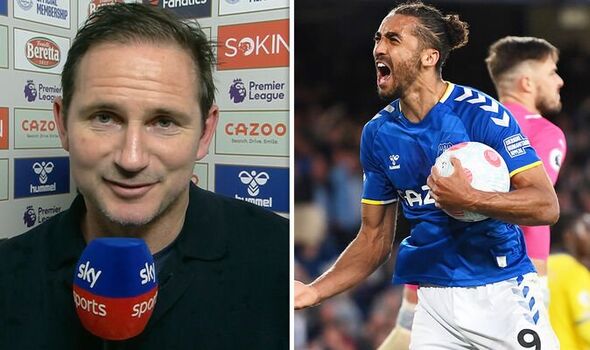 Frank Lampard has admitted he “faked it” in the dressing room at half-time of Everton’s stunning comeback win over Crystal Palace on Thursday which secured their safety in the Premier League. Everton came from two goals down to beat Palace at Goodison Park.

Palace took an early lead through Jean-Philippe Mateta and it looked as if it would be a long night for the hosts. Jordan Ayew was lucky to stay on the pitch after a strong tackle on Anthony Gordon.

But just minutes later, Ayew had doubled Palace’s lead after some poor defending from Lampard’s side. However, whatever the Chelsea legend said at half-time seemed to work.

Michael Keane pulled one back nine minutes into the second half. Richarlison levelled the scores up with 15 minutes remaining before Dominic Calvert-Lewin completed the turnaround with a fine header.

Everton fans stormed onto the pitch after the goal and again when the full-time whistle was blown. Lampard spoke to Sky Sports after the match and opened up on how he turned things around at the break.

He said: “Well sometimes as a manager if you’re honest you have to just kind of fake it, act a bit, not show your feelings because you have to try and turn people, inspire people. There was a small change, Dele Alli came on, Dele was amazing.

“The shape of the team, we changed before half-time but we could give some information. My point was it’s not the tactical change, it’s the emotions now and it’s the character and can you energize the crowd, can you score an early goal to get us back in the game and you have to believe in anything.

“A really simple message. From then on it’s just the players, hand it over to them, they deserve all the credit.”

Lampard admitted he was “overwhelmed” with the feeling of emotion of securing safety in the top flight. He added: “What it means to this club and the circumstances we did it in, because at half-time we weren’t dead and buried but people on the outside would probably say that.

“And then the character of this club, fans, players just dragged us through. The spirit of the club was immense, immense.

“I’m overwhelmed and I’ve got so much thanks for people because there’s a lot of people who have worked so hard for that, to get over the line today. Namely the players, the fans, the board, my staff. Huge night for Everton and now we want to take that forward.”