The Champions League will not beckon for Manchester United. The Championship may not for Everton. If Ralf Rangnick’s interim period at Old Trafford will end in failure, there was a glimpse of salvation for Frank Lampard.

In the battle of the fallen giants, it was Everton, threatened with a precipitous drop out of the top flight after 68 years, who prevailed. They have spent – some would say wasted – some £550 million under owner Farhad Moshiri but a potentially priceless winner came from a homegrown local, Anthony Gordon. After just 11 points from their previous 22 matches, Everton conjured three and grasped at a lifeline.

There may be none for United. Their chances of a top-four finish had already looked remote. Rangnick had conceded they lacked margin for error and they duly erred, delivering the sort of shapeless, witless performance that has felt a recurring theme in their season.

They lacked cohesion and chemistry. They had Cristiano Ronaldo back but, until he drew an injury-time save from Jordan Pickford, he was ineffectual. They ended with a central midfield trio of Paul Pogba, Bruno Fernandes and Juan Mata, making a belated first Premier League appearance of the season, symbolising a club who have overloaded on attack-minded players, lack balance and score too few goals.

So often this season, Everton have been the side with the most pronounced self-destructive streak. Not this time. They took a lead and, unlike at Burnley on Wednesday, retained it. They showed mettle and character. 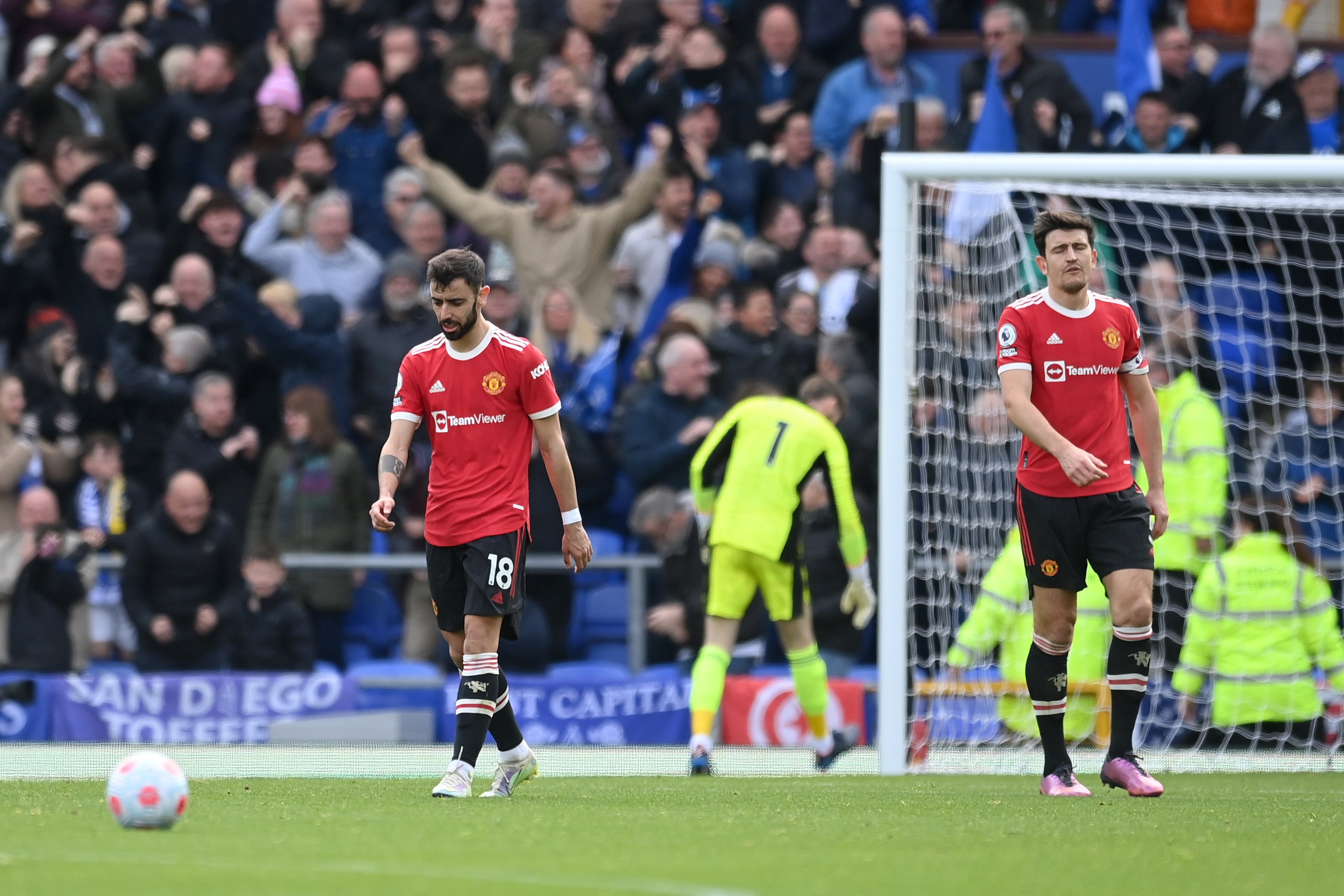 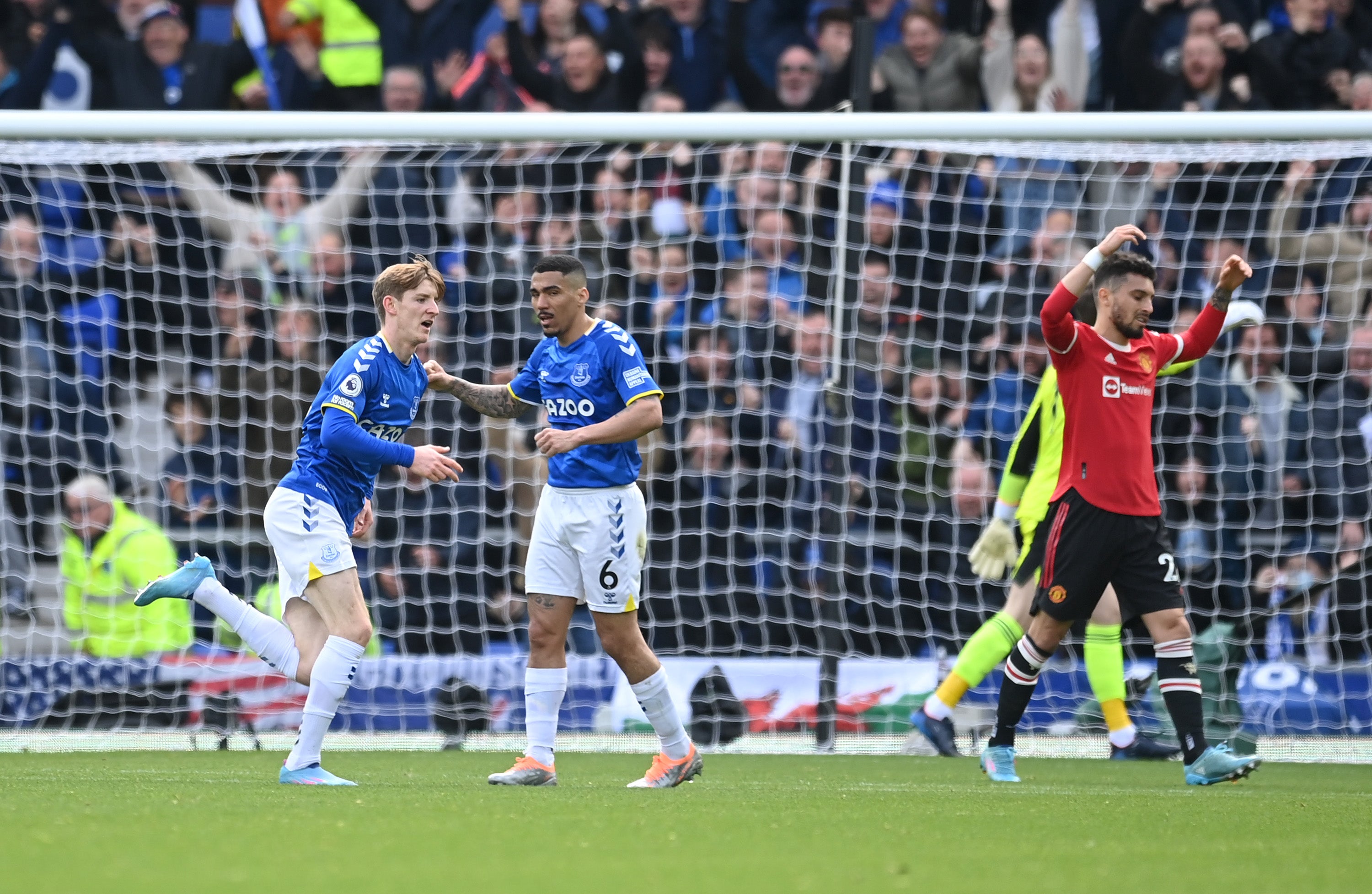 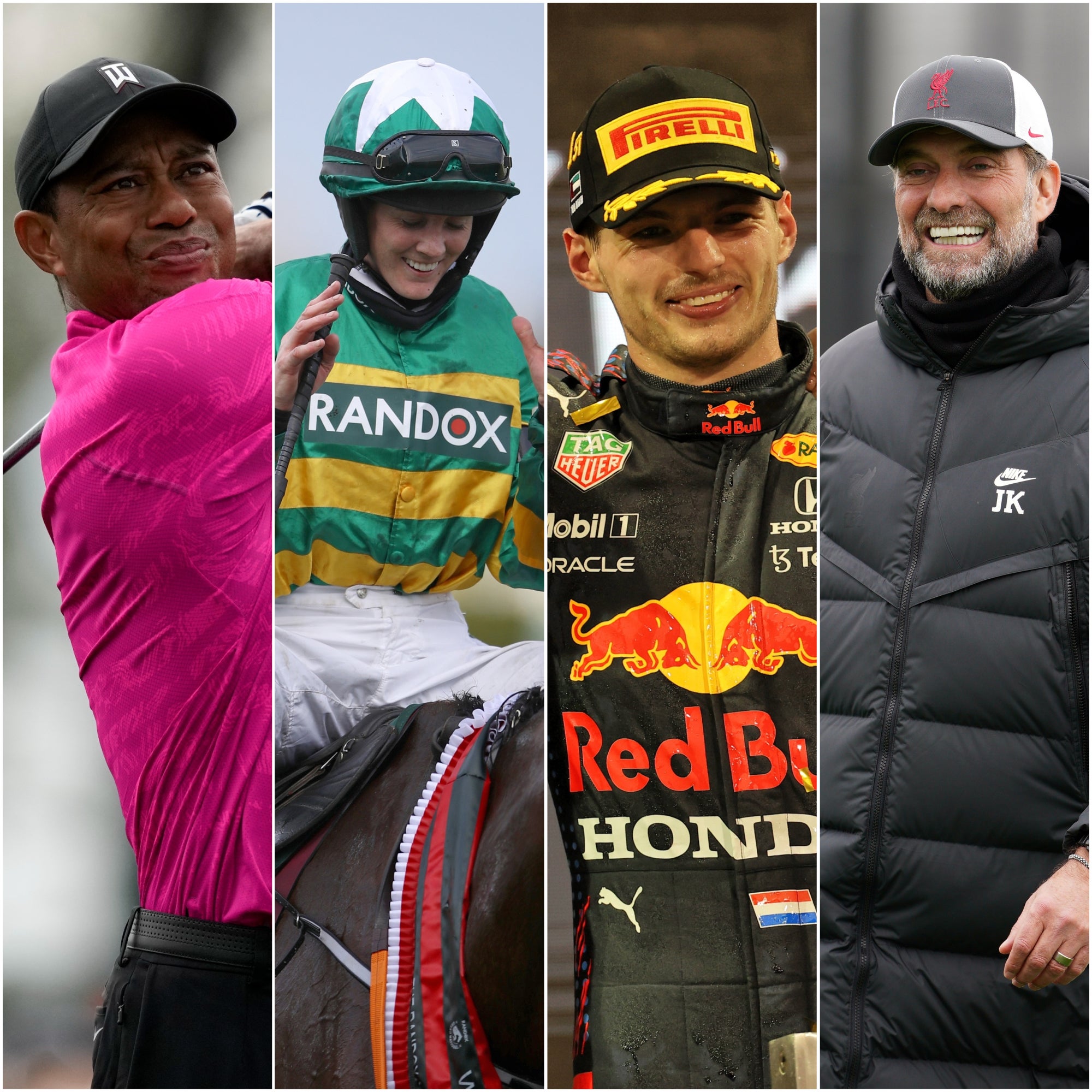 It helped that the battle-hardened quartet of Seamus Coleman, Michael Keane, Fabian Delph and Allan were back. If the centre-back kept giving the ball away, he defended defiantly. Delph lent a contagious brand of commitment, rattling Fred with a challenge that meant the Brazilian limped off. Old heads gave them more solidity and steel. Among their juniors, Vitalii Mykolenko had his best Everton game to subdue Jadon Sancho while Gordon was increasingly rampant. As Dominic Calvert-Lewin’s goal drought continues, the youngster’s irrepressibility could be invaluable.

Another drought continued, but Marcus Rashford was brighter at the start of his recall. Omitted against Leicester last week, when Rangnick preferred to play a striker-less formation, he twice almost marked his 200th Premier League appearance with a goal. Pickford parried a 20-yard shot and stopped a close-range header.

A Mancunian came close to scoring. A Merseysider did. It was doubly fitting Gordon got the goal; partly because he has been Everton’s lone ray of light in recent months and partly because it was the culmination of a passage of play he began by dispossessing the ponderous Nemanja Matic.

It was in keeping with a match where neither showed much accuracy in possession that the goal stemmed from a misplaced pass and a deflected shot. Richarlison aimed for Alex Iwobi, Matic got a foot in and the ball fell to Gordon.

He let fly from 20 yards and it felt emblematic of Harry Maguire’s fortunes that he applied the sizeable touch that wrongfooted David de Gea. 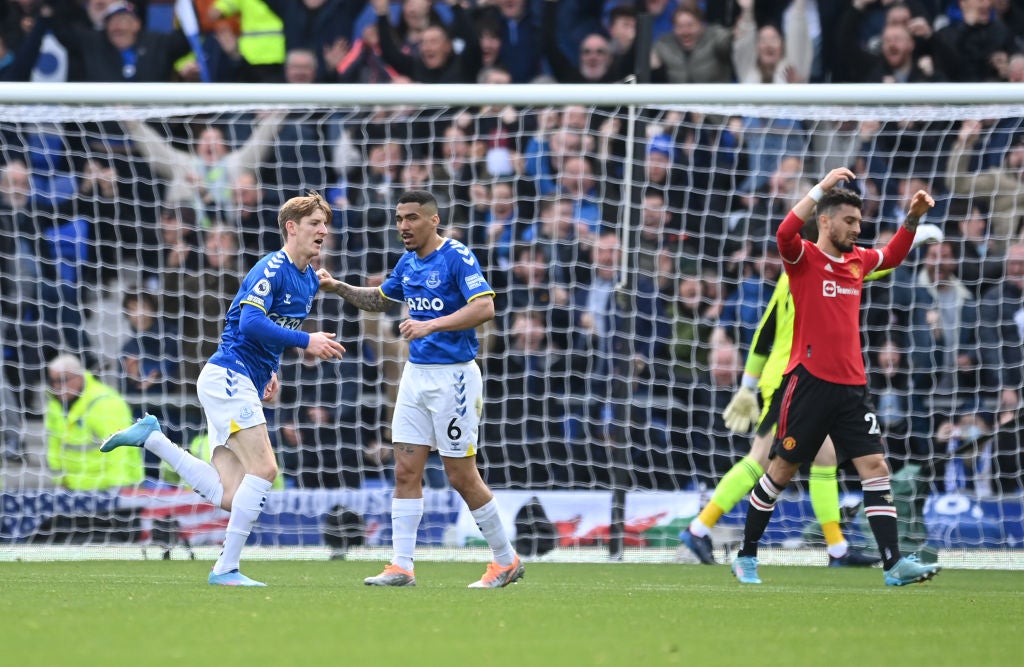 A second deflection could have brought a second goal, Richarlison’s effort requiring a fine save by De Gea.

But United’s response was inadequate. 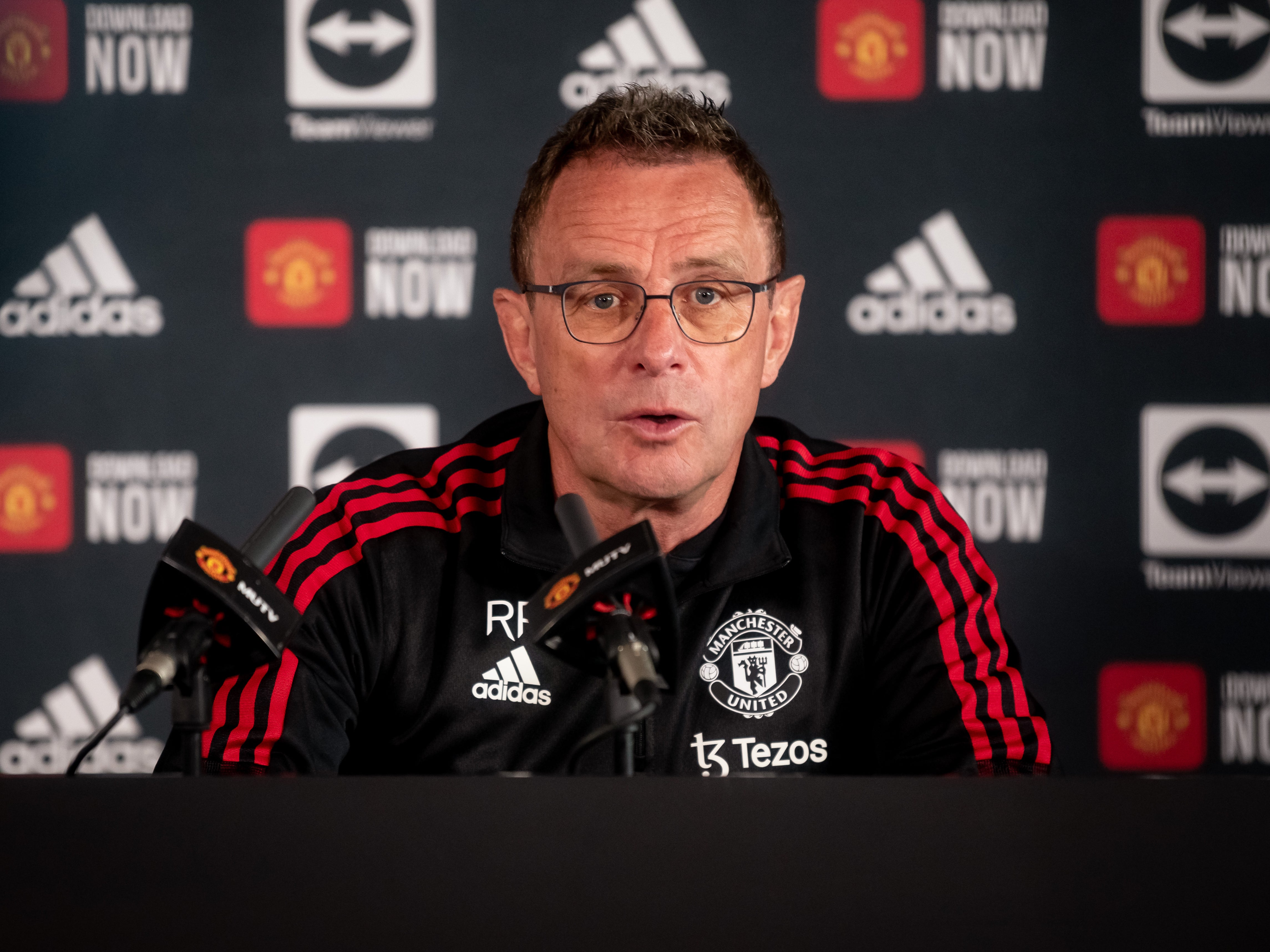 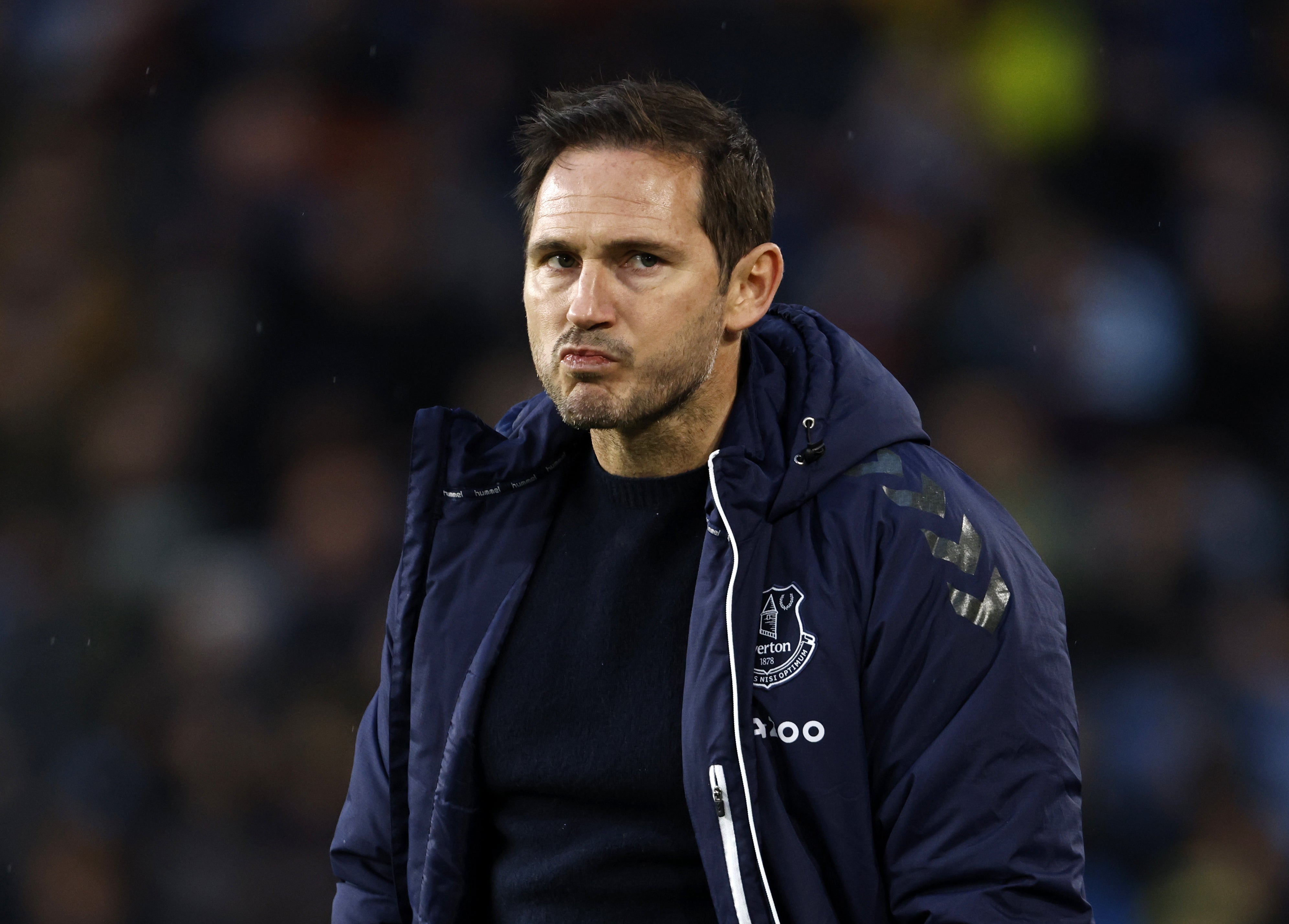 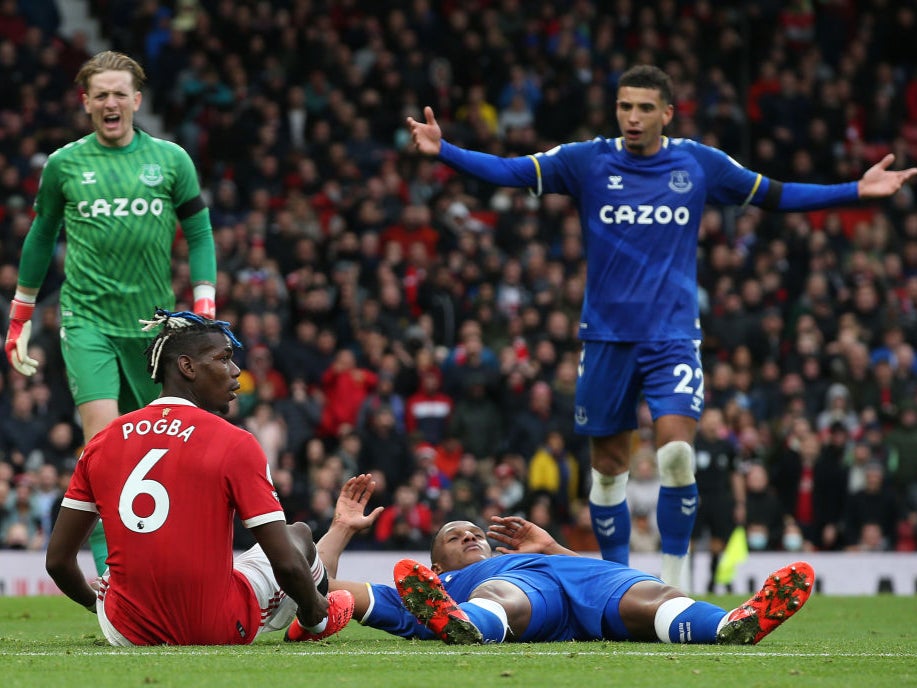 Sancho was a little better when switched to the left as Rashford went off. They had a surfeit of attacking personnel and exerted pressure but without converting it into clear-cut opportunities. Everton were camped in their own box at times but defended with resolve. Delph’s afternoon ended early but with a standing ovation.

Goodison rediscovered its roar, showing its appreciation of players who gave their all. They at least have renewed hope. For United, this was confirmation of what had long looked the case. There is surely no way back into the top four from here.