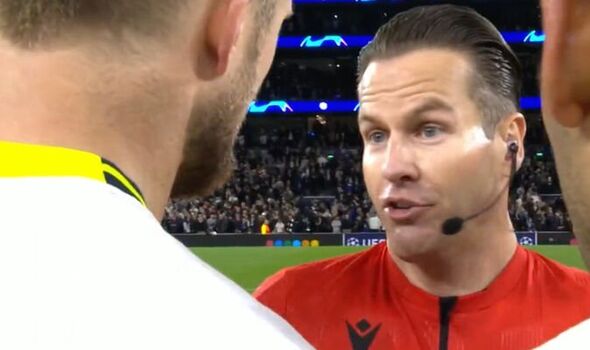 Tottenham defender Eric Dier confronted referee Danny Makkelie demanding an explanation after Harry Kane’s late goal against Sporting Lisbon was controversially chalked off by VAR. Spurs felt they had struck a late winner in their Champions League tie only for the VAR officials to disallow the goal for an apparent offside, much to the fury of the Spurs players and coaching staff as they protested furiously at the final whistle.

Spurs had fought back from a goal down to equalise through Rodrigo Bentancur in the 80th minute after Marcus Edwards struck against his former club. Tottenham then thought they had snatched all three points in the fifth minute of stoppage time when Kane popped up in the box and fired home beyond Sporting goalkeeper Antonio Adan.

The striker took his chance well after a knockdown from Emerson Royal, whose header was deflected by a Sporting defender into Kane’s path. However, after a three-minute delay while the officials in the VAR studio checked for offside, Makkelie held up his hand to disallow the goal as it was deemed Emerson’s header had travelled forwards, not backwards, making Kane offside.

Play resumed for a matter of seconds but the protests had already begun on the touchline, with Conte making his feelings known to the fourth official, while Dier marched over to Makkelie to ask for an explanation and things soon got heated.

As Dier pleaded with the official to explain why it was ruled out, footage emerged of the Dutch official where he could be heard saying: “It was offside.”

The England international then responded: “But why?! Why?! The ball went backwards!”