The families of football and rugby players living with dementia will on Friday be given a chance to share their struggles for the first time, as part of a new drive to reverse sport’s years of neglect.

Scores of ex-players’ wives have described to Sportsmail the loneliness and isolation felt as their once-invincible husbands suffer irreversible decline.

These struggles, plus the difficulty many experience in getting a diagnosis, are likely to be subjects discussed at the first ‘Extra Time to Talk’ meeting for family members of those suffering from sports-related neurodegenerative disease – which has been set up by the new Head for Change organisation. 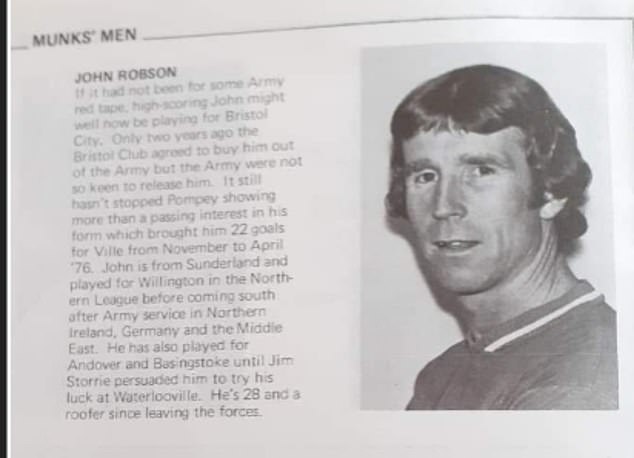 The first of the weekly virtual meetings, on Zoom, will be led by two trustees of Head for Change, Dr Judith Gates and Dr Sally Tucker, the wife and daughter respectively of footballers now living with dementia.

Among the family members joining will be Tina White, the wife of one of two players from the same non-league team – Waterlooville – now struggling with dementia. Mrs White’s husband, Goff and ex-teammate John Robson, 73, were both regularly concussed while playing for the Hampshire non-league club, now Havant and Waterlooville of the sixth-tier National League South. But as amateurs, they have found it impossible to get help through the Professional Footballers’ Association.

White, a former project manager once responsible for dealing with million-pound development projects, played for Waterlooville in an FA Cup tie at Newport County as a teenager. He went on to play hundreds of games for them and other clubs at the top end of non-league football.

He was still coaching the third team at Hampshire club Tadley FC several years ago when he became embarrassed to find he couldn’t locate the right words during his dressing room team talk. He gave up the role. He started forgetting appointments, became confused when driving, withdrawn and depressed.

His wife, Tina, described to Sportsmail several episodes of her husband being concussed as a player – on one occasion being hospitalised because of it. White had a brain scan, a CT scan, a lumbar puncture and a repeat CT scan in 2019, though – as in the case of many former players – doctors were puzzled by the severity of his difficulties. They eventually concluded that he had sustained brain damage due to the repetitive heading and concussion injuries. 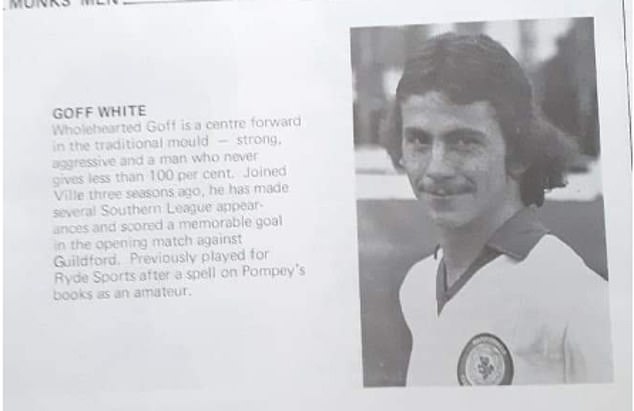 Tina White, whose husband Goff (above) is struggling with dementia, will take part in initiative

‘It’s been a tough journey for us. The emotional side of it. Not knowing what’s wrong,’ said Mrs White. ‘It makes me feel so sad to see pictures of Goff and John from their playing days – strong , fit, healthy and capable men full of life.’

Diagnosis has also been hard to get for Robson, whose career included a brief spell at St Johnstone and included formative years playing for the British Army XI.

He started becoming withdrawn when family visited and has since experienced several unexpected episodes in which he became confused, one whilst driving. But despite two brain scans in the past year, he is also still waiting for a conclusive analysis of what the problem is.

‘It’s been such a struggle,’ said his wife, Ann Johnson. ‘We all feel we are on our own.’

A contemporary whom White and Robson regularly played against – Malcolm ‘Jenner’ Brown – died in a nursing home last month after his own long struggle with early-onset dementia. He was 74.

Dr Gates, co-founder of the Head for Change charity, said that the plight of amateur players must not be forgotten and that their families must be heard.

‘A while ago I received a message from a wife of another ex-amateur player who was also suffering from early onset dementia,’ said Dr Gates. ‘She commented on the fact that high profile players are the ones in the news, but around the country there are, as yet uncounted, numbers of ex-players who were not a household name, but who are similarly suffering. Every player counts. Every family matters. Every dementia diagnosis as a probable result of sports-related head injuries is one too many.’