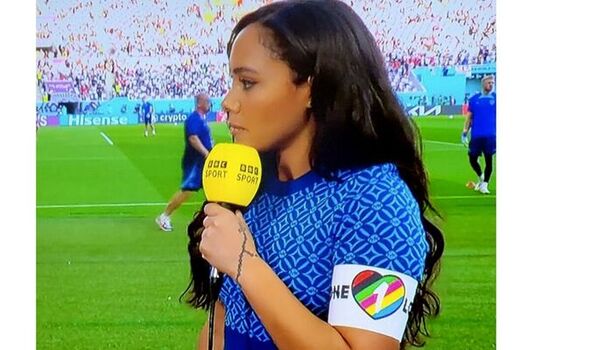 Manager Gareth Southgate and captain Harry Kane had stressed on Sunday the team’s determination to make a stand against bigotry. But the Football Association claimed yesterday morning it had no choice but to comply with a Fifa directive banning the One Love band.

Officials said players in breach of the ban could face disciplinary action, including yellow cards and suspensions.

The band has been seen as a powerful gesture of protest against the host nation Qatar’s ban on same-sex relationships.

England’s decision was announced as TV host Alex Scott, who is in a same-sex relationship, wore her rainbow band to present the BBC’s World Cup coverage.

FA chief executive Mark Bullingham said: “Normally, in this kind of situation, there would be a fine that would be paid, and we’ve always said we’re very happy to do that – because we think it’s important to show our support for inclusion. If the sporting sanctions threat is real, we need to look at that, we need to work out if there is another way we can show our values.”

Culture Secretary Michelle Donelan said it was “disappointing our players are put in a position where they face being punished for supporting equal rights”.

Ashley Brown, from the Football Supporters’ Association, said: “LGBT football fans and their allies will feel angry. We feel betrayed.

“We feel contempt for an organisation that has shown its true values by giving the red card to tolerance.”