The World Cup is supposed to be touched or held only by a select group but the Turkish chef – once described by FIFA president Gianni Infantino as “legend number one” – was recorded even kissing the trophy following Argentina’s triumph in an epic decider on Sunday. 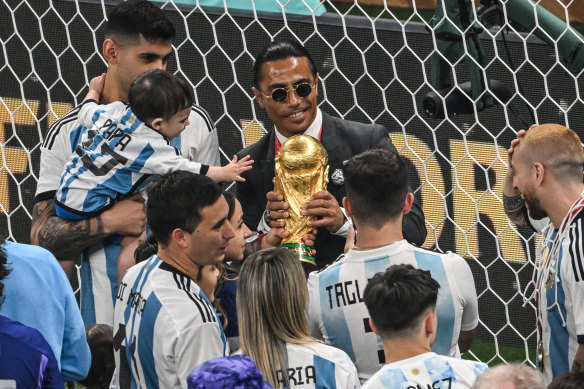 He also made a series of cringeworthy attempts to get Lionel Messi’s attention, even though the Argentina captain did not appear to know who he was.

The footage prompted considerable outrage and FIFA has released a statement admitting the chef, whose real name is Nusret Gokce, should not have been on the Lusail Stadium pitch during Argentina’s moment of glory.

“Following a review, FIFA has been establishing how individuals gained undue access to the pitch after the closing ceremony at Lusail Stadium on December 18 – the appropriate internal action will be taken,” a spokesperson said.

There is no formal commercial relationship between FIFA and Gokce, who has steak houses in Dubai and Doha, but a video has emerged of Infantino openly endorsing the chef’s Nusr-Et restaurants.

Gokce first became famous in 2017 following a social media posting of his theatrical preparation of meat and, wearing FIFA accreditation. He became an embarrassingly visible presence on the pitch after Sunday’s final.

Videos show his awkward attempts to hold the World Cup trophy and pose for pictures alongside players, even though he had no obvious links to the team.

In one video, he gives the fabled trophy a solid pat and then mimics pouring salt on top. He also gives it a kiss and holds it aloft.

FIFA has specific rules designed to preserve the mystique and prestige of the World Cup.

“Its current design dates back to 1974,” FIFA’s website reads. “As one of the most recognised sports symbols in the world and a priceless icon, the original FIFA World Cup trophy can only be touched and held by a very select group of people, which includes former winners of the FIFA World Cup and heads of state.”

The chef’s involvement has sparked accusations of “cronyism”, especially after separate pictures and videos emerged of him being hugged by Infantino, who is seen introducing him to various dignitaries.

In one, Infantino applauds Gokce chopping up some meat as if he has just witnessed something extraordinary. “Number one, the best of the best,” Infantino says.

It is understood that Infantino was not involved in sanctioning Gokce’s appearance on the pitch after the final and that the “internal action” will relate to any FIFA staff member who allowed his access.

Watch every match of the UEFA Champions League, UEFA Europa League and UEFA Europa Conference League on Stan Sport. Returns for the Round of 16 in February 2023, with all matches streaming ad-free, live and on demand.