Ready to start, Phil? Foden looks focused in training as he aims to force his way back into Man City’s starting XI to face Chelsea after he and Cancelo were benched for the last three games… with Guardiola hinting poor body language was why some sat out

Phil Foden cut a composed and focused figure during Manchester City’s training session on Tuesday as he looks to force his way back in Pep Guardiola’s starting plans.

Foden, as well as Joao Cancelo, have not started any of City’s three games since the World Cup finished, with the pair both being reduced to bit-part roles in the Carabao Cup fourth-round win over Liverpool as well as their most recent outings in the Premier League against Leeds and Everton.

On Tuesday, Foden was pictured getting a massive hug from his manager before getting stuck into the session and with City facing Chelsea in a crunch clash on Thursday, suggesting that the England star was out to impress to win back his spot in the starting XI. 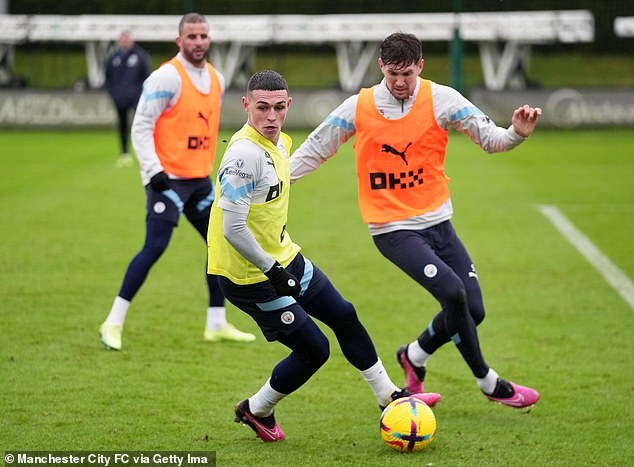 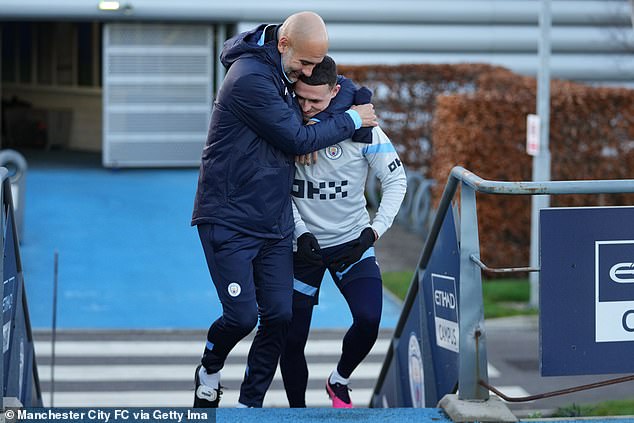 City trail league leaders Arsenal by eight points and their most recent slip-up against Everton will be have been playing on Guardiola’s mind after what he said their last three performances were some of the best he’s seen in his six-year stint at the club.

But the omissions of Foden and Cancelo from the starting XI continues to raise eyebrows – especially after the fact how Guardiola hinted that poor body language was the reason why certain players were being left on the bench.

‘Every time it is difficult to choose the team for me — always top players are not playing,’ Guardiola said last week. ‘Lately, as I get older, I mainly look at the body language. In the training sessions and everything. You cannot play good when the body language is not correct.

‘Sometimes you choose the players for how happy they are. That is one of the main decisions with choosing the line-up, because with the skills, I know how good they are. The body language depends on them and sometimes they are not good and it is more difficult.’ 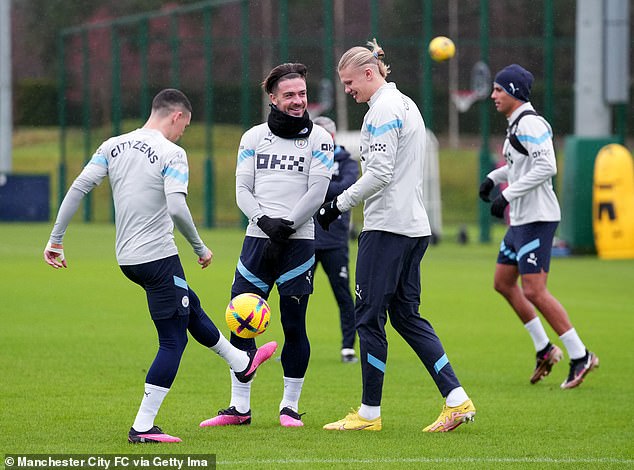 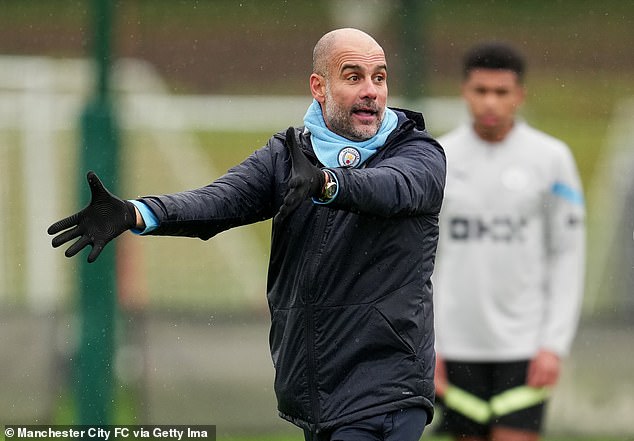 Of the established players who are available, only Foden, Cancelo and Kyle Walker started all of City’s three matches in December from the bench.

With Walker’s minutes still being managed following a groin injury, the other two present intrigue given their stellar contributions in the last two title triumphs.

Centre-back Nathan Ake has been preferred at left back ahead of Cancelo, given his shaky start to this season in a defence, where he has already conceded just 10 fewer goals than the whole of last season.

Foden, meanwhile, has started just one of City’s last six in all competitions.

Jack Grealish and Riyad Mahrez are preferred in the wide areas and, on the surface, Foden’s ongoing omission seems confusing. 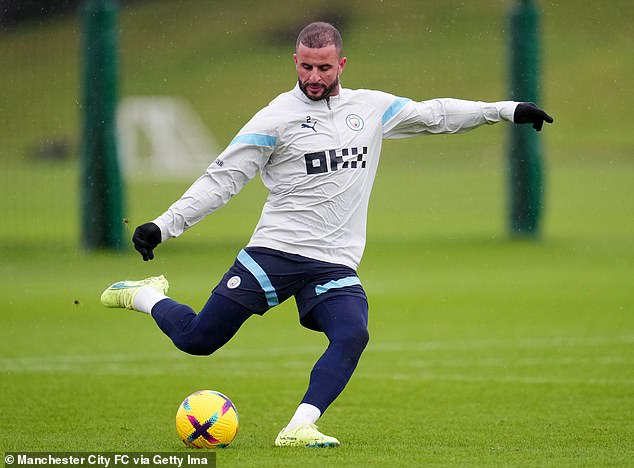 But his selection, or non-selection, has now become a debated topic at both club and international level in recent months and that is unlikely to represent a coincidence.

‘I see something on the pitch, in the training sessions, and I use my intuition to use Jack in these games because he gives us extra passes,’ Guardiola said when asked about Foden, separately to his point on attitude.

But with his appearance in training, Guardiola could now be ready to give Foden the nod for their visit to Stamford Bridge on Thursday night.

Should it he and Cancelo once again start on the bench, then questions over their attitude will once again resurface.

Everything wrong with the Qatar World Cup