Former Rangers captain and Street Soccer Scotland pioneer Ally Dawson passes away at the age of 63 following a ‘long battle with illness’, his family announce

Former Rangers captain Ally Dawson has died at the age of 63, his family have announced.

Dawson made 315 appearances for Rangers during a 12-year spell at Ibrox.

His family said in a statement: ‘It is with much sadness that we announce the passing of our beloved Ally Dawson following a long battle with illness. 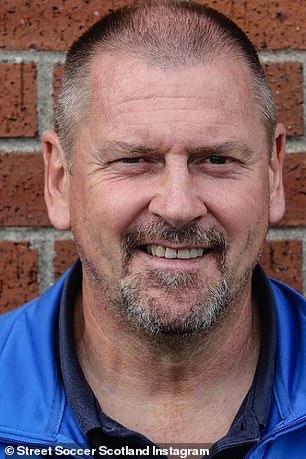 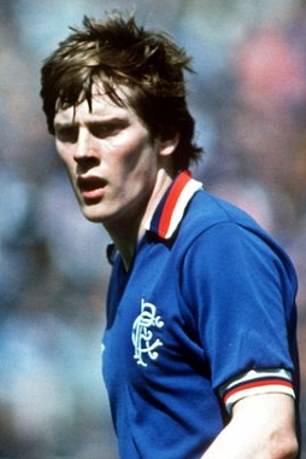 ‘To us, Ally was a loving husband, father, son and brother but we know he meant a lot to so many others.

‘We will remember the impact he had on our family with affection, inspired by the courage with which he fought his illness and the way he lived his life and grateful that Ally spent his final days with those he loved and who loved him.’

Dawson joined Rangers at the age of 16 in 1975 after leaving Johnstone High School in Renfrewshire.

The full back suffered a fractured skull on a club tour of North America in an incident which many felt prevented him reaching his true potential. 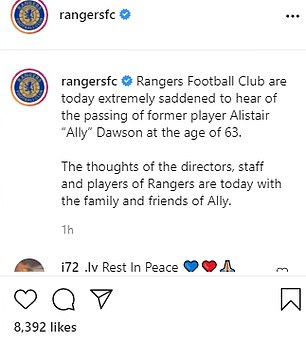 However, he went on to captain Rangers and won two Scottish Cups and four League Cups while gaining five Scotland caps under Jock Stein in the early 1980s.

Rangers said they were ‘extremely saddened’ to hear of their former player’s passing.

‘The thoughts of the directors, staff and players of Rangers are today with the family and friends of Ally,’ the club added in a statement.

Dawson moved to Blackburn in 1987 and spent three years at Ewood Park before spells with Limerick and Airdrie and a stint as a player/manager in Malta.

He later spent three years as Hamilton manager, leading Accies to the Third Division title in 2001.

The former defender was later a youth coach with Rangers and then worked for the charity Street Soccer Scotland.

Dawson was a founder member of the organisation and coached Scotland to the Homeless World Cup title in 2011.

David Duke, founder and chief executive of Street Soccer Scotland, said: ‘The Street Soccer family is deeply saddened by Ally’s passing. We have all lost a father figure and a brilliant man whose positive impact on those he worked with and those he supported will never be forgotten.

‘Ally was humble, kind-hearted and gifted. There are many Street Soccer people today who have lost a great friend and mentor and somebody who changed their lives for the better, and our thoughts are with Ally’s family and friends at this difficult time.

‘In due course, we will consider how best to reflect Ally’s legacy in Street Soccer Scotland but for now we are all reflecting on a profound contribution to our collective journey and missing Ally immensely.’

Chelsea 0-0 Man Utd: Goals are a problem for Ole Gunnar Solskjaer against the top teams but why?