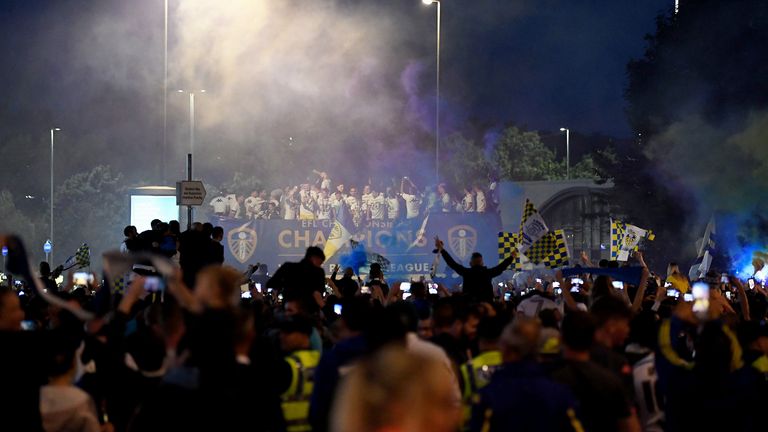 Thousands of fans congregated outside the ground for the final night of the Championship season against Charlton, despite warnings not to do so due to the ongoing coronavirus pandemic.

Leeds defended their decision put on open-top bus celebrations for their players outside Elland Road despite the gathering of a large crowd, saying the decision was made following consultation with council and safety groups.

Superintendent Jackie Marsh, of Leeds District Police, said: “The safety of fans and the wider public has always been our primary concern and that is why we advised the safest way for people to celebrate in these times was in their own homes.

“However, it was anticipated that some fans would gather outside the ground last night to celebrate and a police operation was put in place to make sure that this was managed safely and effectively.

“This operation saw a total of four people arrested for public order offences. One officer received a minor injury which did not require hospital treatment.

“While most of those who gathered did so with good intentions, there were some missiles thrown which resulted in officers having to wear protective equipment.

“Assaults on police officers will not be tolerated and enquiries will be made to identify those responsible so appropriate action can be taken.” Celebrations were had in Leeds city centre and outside the ground at the weekend, in which at least one police officer was hurt, and a Leeds city councillor subsequently warned against a repeat on Wednesday night.

Leeds say the decision to allow the players to celebrate in front of the fans was designed to give those supporters a reason to end their celebrations and disperse.

A statement read: “Following consultation with the SAG and council, Leeds United arranged for a bus to be parked outside the East Stand reception as a contingency to assist dispersal should a crowd congregate at Elland Road, despite a month-long campaign from the club and supporter groups to encourage supporters to stay at home.