Sydney FC have opened up a seven-point gap on top of the W-League ladder after a blistering 4-0 rout of their nearest rivals Canberra United.

Billed as a potential grand final preview, the Sky Blues proved beyond any doubt they’re the team to beat this season after sweeping aside the visitors with consummate ease, propelled by a commanding performance in attack from a handful of Matildas hopefuls. 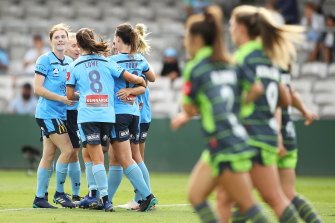 Canberra had no answer to an inspired Sydney FC. Credit:Getty

The final margin would have been even greater were it not for some desperate last-ditch defending from Canberra – or the absence of the VAR in the W-League, which resulted in a second-half effort from Remy Siemsen being controversially disallowed.

Siemsen was following up a saved shot from Princess Ibini in the 56th minute when she rattled her own shot into the crossbar. It bounced straight down and appeared to cross the goal line – according to replays, at least – before spinning back into play, but the assistant referee did not signal for a goal, much to Siemsen’s dismay.

Siemsen did manage to get her name on the scoresheet – twice – with goals in the space of four minutes later in the half to complete the rout for Sydney at Netstrata Jubilee Stadium, although she’ll argue she should have finished with a hat-trick.

It was Sydney’s sixth win from six outings and their fifth clean sheet. The Sky Blues have conceded just the one goal so far this season. They now have the league’s best attacking record to go with it, too, and at the halfway point of the campaign, they will be extremely difficult to catch.

Former Matildas star Michelle Heyman came into the match one goal short of levelling Sam Kerr’s all-time W-League goalscoring record but the rejuvenated striker was barely given a sniff by Sydney’s defence, with Canberra taking just seven shots to 22.

United brought in the same starting side as the one that smashed Western Sydney Wanderers 3-0 last weekend but will need to find another level or two should they meet the Sky Blues again later this campaign to have any hope of challenging them.

The hosts started strongly and took the lead in the 16th minute when a dribble down the left from Ibini created havoc in the Canberra box.

Ibini’s cutback was pushed away by goalkeeper Keeley Richards but only as far as Siemsen, whose shot from point-blank range was blocked by Jessika Nash. Mackenzie Hawkesby, however, was on the spot to poke the deflection into an empty net.

After a litany of half-chances and close shaves, the lively Cortnee Vine finally made it 2-0 in the 65th minute with a smart curled finish after she was played in by Hawkesby.

Siemsen’s two goals both came from Teresa Polias corner kicks the first after a goalmouth scramble, and the second after lurking intently at the back post.

Manchester United vs Watford prediction: How will FA Cup tie play out tonight?