Gareth Bale is back enjoying his football and can help get Tottenham “very close” to challenging for the Premier League title, according to the forward’s agent.

Bale has returned to Tottenham on a season-long loan from Real Madrid, after going through “a hard time” in the Spanish capital.

Speaking to Sky Sports last month, Bale said he was back at a club he “loves with all my heart” and his representative Jonathan Barnett insists, for Bale, the move “wasn’t about money”.

In an exclusive interview with Sky Sports News, Barnett said: “He loves it [at Tottenham]. The most important thing is he has got a smile back on his face and that he’s enjoying life.

“He’s had offers and it wasn’t right for him. When Tottenham came knocking, it was right.

“He’s had a hard time and now he’s going to enjoy himself. He deserves to be happy. He’s been probably one of Britain’s best ambassadors.

“He wasn’t going anywhere with Real Madrid. We’d got to an impasse and some silly things were happening on both sides.”

Bale suffered a knee injury on Wales duty earlier in September and is yet to feature for Jose Mourinho’s side.

Despite Bale’s absence, Tottenham have impressed and are unbeaten in all competitions since their opening-day defeat to Everton, including a 6-1 thrashing of Manchester United last Sunday. 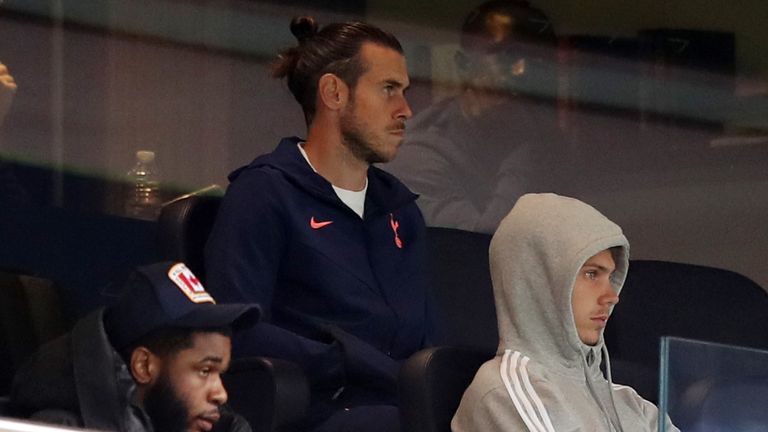 Speaking to Sky Sports News on Deadline Day, former Spurs boss Harry Redknapp boldly suggested the club could win the league this season and Barnett believes that is Bale’s aim.

Asked what Bale’s ambitions are for his time at Tottenham, Barnett said: “Win the Premier League, without doubt.

“Tottenham have got a good squad, a great coach and with Gareth’s help I’m sure they will get very close. You only have to see the results from last week to see that it’s open.

“It kills me to say that because I’m an Arsenal supporter, but that’s the reality.

“He has nothing to prove to anybody. He’s won more than anybody else. He was one of the best three or four players in the world and I think he still is. If he succeeds, great, If not, he’s been there and done it. But, I think he will succeed.”

Barnett unsurprised by busy window: ‘If you stay still, you go backwards’

Barnett, who is chairman of the sports agency Stellar Group, has had a busy summer with fellow clients Sergino Dest, Ben Chilwell and Ruben Loftus-Cheek among those on the move in an action-packed transfer window.

Despite many clubs feeling the financial strain of the coronavirus pandemic, more than £2.5bn was spent by clubs in Europe’s top five leagues.

“Like in any business, if you stay still, you go backwards,” Barnett said. “You can’t just sit there and wait for something to happen.

“You have to look at your finances, balance your books and if you have money to strengthen then you go again. If you haven’t, you’ve got to maybe sell to start doing some proper trading. I don’t think you can just stand still and cry.

“You have to run a club properly. I know, for example, there are certain clubs that were pleading poverty but refusing to sell a player for millions which doesn’t make economic sense.

“In any world, you can’t just keep putting your hand out and asking for help from other people.” Barnett, who Forbes magazine named the top sports agent in the world in 2019, is now looking ahead to a new partnership after Stellar Group were acquired by North American-based entertainment giants ICM Partners.

ICM Partners represent some of Hollywood’s biggest names, including the likes of Olivia Colman, Samuel L Jackson and Beyonce Knowles-Carter.

Barnett, who has been named executive chairman of the newly-founded ICM Stellar Sports, said: “For me, it’s very exciting. We’ve been going since 1992 and we’ve built it up to be one of the biggest, if not the biggest, football agencies in the world. I started with my partner, David Manasseh, from a kitchen table.

“For my clients, it’s a great opportunity to become global stars, working with the marketing people at ICM. We’re very proud of what we’ve achieved and we have great encouragement from all our clients.”