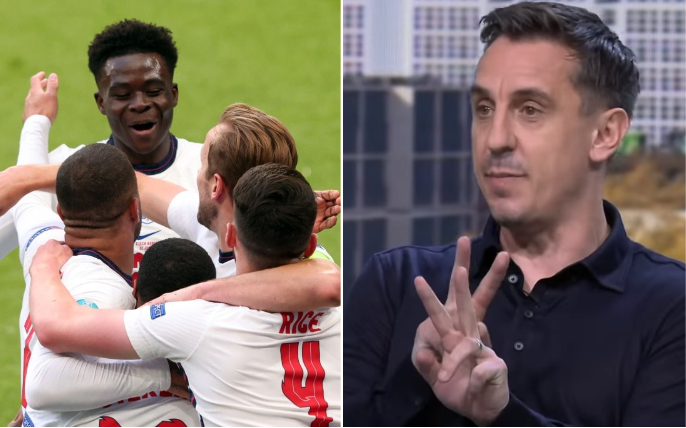 Gary Neville has urged Gareth Southgate to make significant changes to his team ahead of Tuesday’s Euro 2020 last 16 tie against Germany and even suggested the England manager should alter his formation.

The Three Lions cantered into the knockout phase with a professional 1-0 win over Czech Republic on Tuesday, keeping their third clean sheet in a row and advancing as winners of D, despite scoring only two goals so far.

Topping their section proved to be no guarantee of a favourable draw, however, with Germany up next at Wembley after Joachim Low’s side squeaked through following a 2-2 draw with Hungary last night, where a late Leon Goretzka equaliser ensured the 2016 semi-finalists avoided an embarrassing early exit.

Germany’s best performance of the competition to this point came in their 4-2 win over reigning champions Portugal, where their rampaging wing-backs, especially Robin Gosens, caused havoc.

In order to combat that threat, Neville has encouraged Southgate to contemplate mimicking Germany’s formation and switching to a 3-4-3 system which would see Reece James recalled and Kyle Walker reverting to a more central position.

With Declan Rice and Kalvin Phillips patrolling the midfield, Neville has a suggested a three-man attack comprising of Tuesday’s man of the match, Bukayo Saka, as well as captain Harry Kane and Raheem Sterling, who has scored both of England’s goals so far.

‘Wing backs to match up and engage Germany’s,’ Neville wrote on Twitter. ‘Saka and Sterling left higher in channels vs Germany wide centre backs. Rice and Philips onto Kroos and Gundogan.’

That starting XI would mean no place for Jack Grealish, who turned in an impressive display in midweek, having been forced to settle for a bit-part role prior to the victory over the Czechs.

Neville also resisted the temptation to restore Mason Mount to the starting line-up with the Chelsea star currently in self-isolation and only permitted to train with his teammates again from the day of the Germany game.

Phil Foden, whose withdrawal against Scotland drew an angry response from the England crowd, would also have to settle for a place among the replacements.

Here’s the former Manchester United and England defender’s XI… do you agree?