Glazers out? – Takeover talk ramps up at Manchester United

Manchester United icon Gary Neville has responded to Piers Morgan’s call to reveal what exactly he said to Cristiano Ronaldo ahead of the Red Devils’ 2-1 win over Liverpool on Monday evening. The Portuguese striker interrupted the Sky Sports broadcast with Neville, Roy Keane and Jamie Carragher and was spotted talking with the two former United players.

Ronaldo declined to speak on camera amid ongoing rumours surrounding his future, and snubbed former Liverpool defender Carragher. Morgan took to Twitter to speculate what the conversation between Neville and Ronaldo was about. “I strongly suspect he wasn’t showing Mr Neville any heartfelt gratitude for his recent observations either,” Morgan wrote. “Care to tell us what he said to you @GNev2 ?”

Neville has been critical of the five-time Ballon d’Or winner this summer and called on the 37-year-old to use his leadership skills to rally the United squad, after a disappointing start to the season despite the win over Jurgen Klopp’s side. “You’re the man, you’re the star, you’re the best player in the world,” he said. “Come on, now is not the time to be throwing your arms around,” Neville told The Diary of a CEO podcast. “Now is not the time for you to be walking off the pitch.

“Now is the time to make sure you lead those people, but he wants to leave, he wants to go play somewhere else and that might happen, and who can blame him? He wants to finish his career at a club that is achieving great things.” 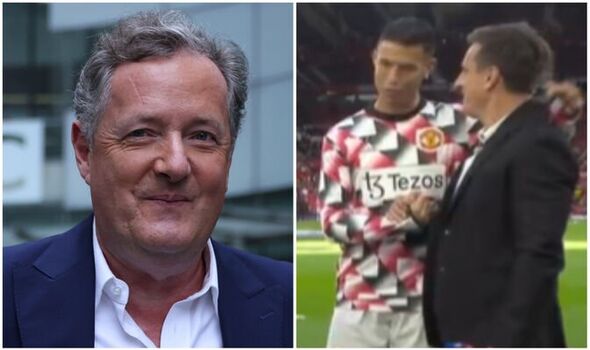 On Tuesday, Neville responded to Morgan’s question and recouted his conversation with Ronaldo. “He said ‘Are you good?’ To which I replied ‘yes, are you good?’ He replied ‘yes’. I replied ‘all the best’,” Neville tweeted. “Were you expecting something else Piers?”

Morgan swiftly replied with a Godfather reference: “That’s what Don Corleone used to say before he whacked people…” Ronaldo began the victory over Liverpool on the bench alongside club captain Harry Maguire, but the forward was brought on in the 86th minute for goalscorer Marcus Rashford to defend his side’s one-goal lead. 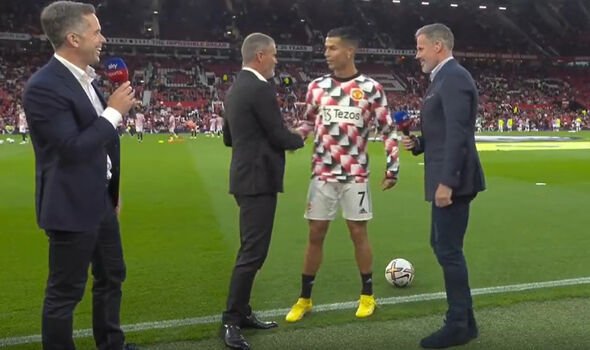 Before the game, he shook hands with both Neville and Keane but ignored Carragher. Sky Sports host David Jones joked at the former Liverpool man: “Nice conversation with you Jamie,” Carragher replied: “Totally blanked!”

Ronaldo previously revealed that he would explain all in an interview at the end of the summer after he reportedly asked the club to consider any serious offers for the 37-year-old.

Erik ten Hag claimed that he did not know what that would achieve, and that Ronaldo is in his plans for the season. “I don’t know what he wants to achieve with that so if you want to know that you have to ask him,” Ten Hag told Sky Sports. “That’s not what he’s telling us. We plan with him.”