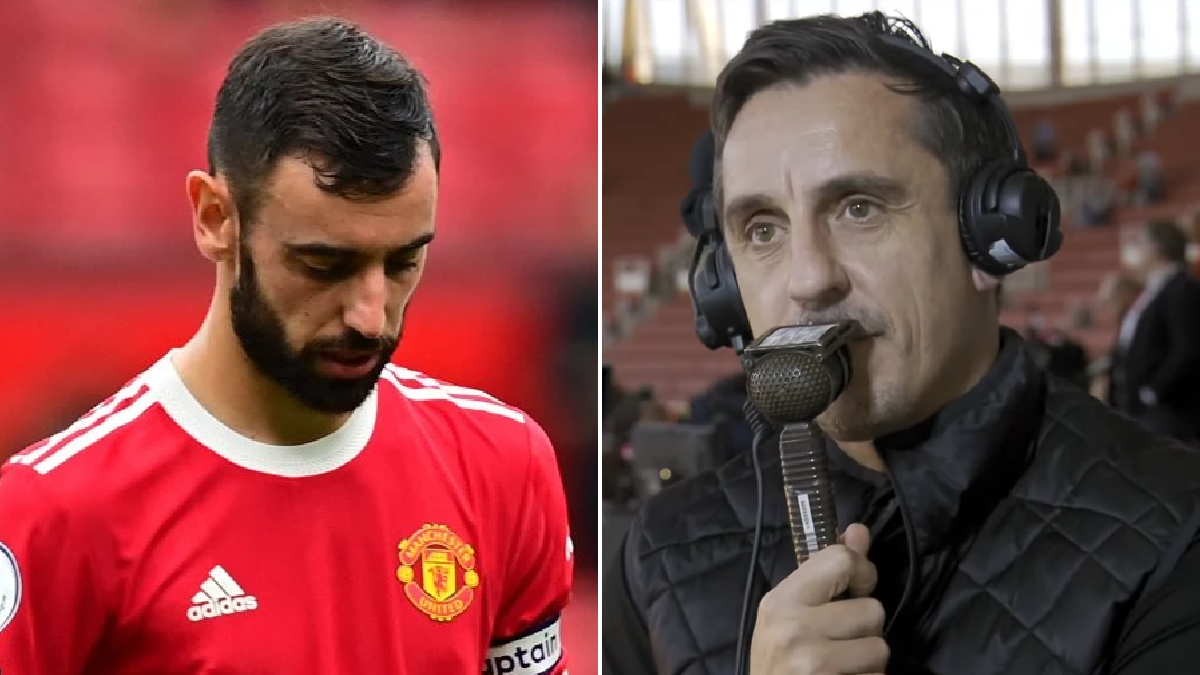 The Portuguese midfielder, who is usually nerveless from the spot, spurned a chance to claim a scarcely deserved point at Old Trafford over the weekend when he smashed his effort high over the crossbar and into the top stand.

United’s 1-0 defeat compounded a disappointing couple of weeks, having also lost to Young Boys in the Champions League and been knocked out of the Carabao Cup at home to West Ham.

Late on Saturday evening, Fernandes addressed his penalty miss in a lengthy missive on social media that was nearly 300 words long, thanking fans for their support and pledging to ‘keep doing everything I can to help my teammates’.

His message echoed a similar post made by Jesse Lingard barely a week earlier, when the midfielder apologised for his careless back pass that gifted Young Boys a stoppage-time winner.

But Neville has slammed the emerging trend of players issuing statements to apologise for every little mistake in matches, labelling it ‘embarrassing’ and suggested Fernandes and Lingard should sack their PR teams.

Asked on Twitter whether players should be apologising for missing a penalty, the former right-back replied: ‘It’s embarrassing! They need to sack their PR people, speak with some authenticity and get on with it.

‘I’m going to go big on this in the next few weeks. They’ve all got these communications managers that are creating personalities that don’t exist!’

United’s social media account was ridiculed for sharing a picture of the club’s players commenting on Fernandes’ Instagram post, alongside the message ‘United, always’. They had shared a similar graphic following Lingard’s apology too.

Fernandes had written: ‘I’m a player who leaves everything on the pitch, with great desire and commitment. And that’s what I’ll continue to do.

‘Thank you for all your support after the final whistle! Hearing you chanting my name in the stadium was very emotional…

‘I will come back stronger for me, because these are the standards I hold myself to, but most of all for my teammates and our fans who have always supported us.’