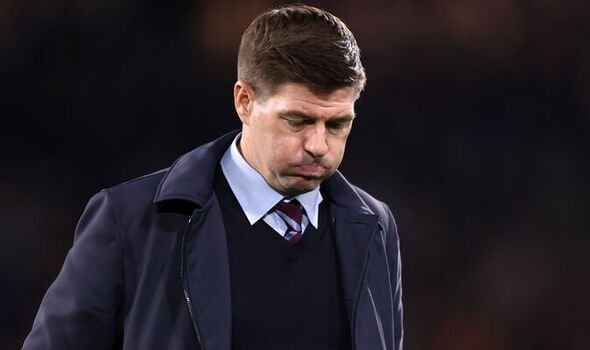 Steven Gerrard was the subject of mocking chants by his own supporters as Aston Villa were downed 3-0 by Fulham on Thursday evening. Villa fans demanded that the Liverpool icon be sacked after the humiliating defeat, which leaves the Villans within touching distance of the relegation zone.

This was another disastrous evening for Gerrard that turned sour in the second half. Fulham led through Harrison Reed’s strike, before Villa midfielder Douglas Luiz was sent off.

Fulham added two more second-half goals, while visiting Villa fans demanding that Gerrard get the chop. “You’ll never work again,” was one of many damning chants from the away section at Craven Cottage.

“We want Gerrard out,” was another song bellowed out by the Villa fans, in a clear message to the club’s board. Another was a rendition of a chant previously sung by Chelsea supporters that referenced Gerrard’s infamous slip that cost Liverpool the Premier League title in 2014.

This defeat left Villa out of the relegation only on goal difference, with the Midlands outfit level on nine points with 18th-placed Wolves. Gerrard’s side have won just two of their 11 Premier League games, losing six.

In his pre-match press conference, Gerrard insisted that he remains committed to dragging Villa out of their poor form. He said: “I’ve had tough days. But tough days are okay because you need to use them as motivation for when better days come.

“I’m a young manager, I take that and this is a tough period. But it’s a great challenge for me from a personal point of view.

“I want to prove to everyone I can change our situation. I’m here to fight and lead every single minute of every day and I have confidence in my ability to change the situation. I am game for these periods as I believe and know I can get through them.”

Gerrard, who replaced Dean Smith a year ago, added: “I accept how I am being judged now. The reality is no one on the planet is more determined to change it more than myself.

“When you play twice in four days, you can change the mood really quickly, but you’ve got to deliver. I’m all in for that. I know these players are better than their league position.”

Villa face a tough run of fixtures before the World Cup starts in a month’s time. They host Brentford on Sunday before travelling to Newcastle. They then face Manchester United twice – with one a crunch League Cup clash – before going to Brighton.