Giant-killers APIA Leichhardt have become the first state-league team to conquer two A-League opponents in the FFA Cup, punishing a woeful Western Sydney Wanderers 2-1 to advance to the quarter-finals and heap pressure on their coach Carl Robinson.

The NPL NSW outfit famously toppled the reigning A-League champions Melbourne Victory at Leichhardt Oval three years ago; on Tuesday night, they did it again at the same venue on another memorable night for the 1987 National Soccer League champions. 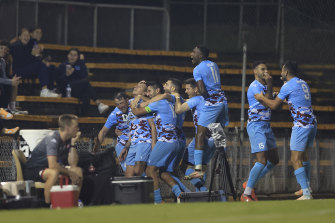 The hero this time was American-born striker and reputed NPL star Jason Romero, who recently went on trial with the Wanderers but failed to convince Robinson he was worthy of a professional contract. Romero was a thorn in their side all night, pouncing in the 27th minute after teammate Jack Armson forced Ziggy Gordon into a sloppy turnover as he tried to play out from defence.

Tynan Diaz then made it 2-0 on the hour mark with an audacious long-distance free kick, spotting Wanderers goalkeeper Daniel Margush metres off his line before launching the ball into an empty net from 40 yards in spectacular style.

Western Sydney dominated possession all night, hogging the ball for 75 per cent of the match, but appeared to have no real plan to break down APIA’s defences. The underdogs absorbed the pressure in relative comfort and picked the right moments to hit back – usually through the dangerous Romero, whose pace and guile was far beyond anything the Wanderers could offer in the other direction.

It took until Tass Mourdoukoutas’ shot from the edge of the box was deflected goalbound with 20 minutes to go for the Wanderers to begin playing with any sense of urgency. Around the same time, APIA seemed to hit the wall with exhaustion, and it was something of a miracle that they held on amid a furious late hunt for a second goal from Western Sydney. 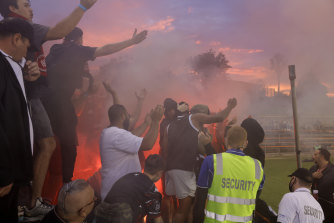 Wanderers fans brought the noise – and the colour – to Leichhardt Oval, but left empty-handed.Credit:Getty

Robinson fielded a completely different team to the one that beat Wellington Phoenix 2-0 in the A-League on Friday night, resting his key players while handing rare starts to players like Gordon, James Troisi and Tate Russell, who have all been benched in recent weeks, while also promoting a handful of academy products.

But even with a second-string team, taking care of business against a semi-professional team who are months out of season was the minimum expectation for the Wanderers. APIA’s NPL campaign was cut short in July due to the delta outbreak in Sydney, and their only match since then was last week’s gruelling extra-time battle with the Cooma Tigers in the round of 32, which they eventually won 3-0.

The difference in energy and intent on display from the two sides was an indictment on Robinson and a credit to APIA, who are among the leading contenders to play in a proposed national second division, which Football Australia is planning to launch either next year or in 2023.

APIA – the last non-A-League team left in the FFA Cup – will now face the Central Coast Mariners in the quarter-finals, and will fancy themselves a strong chance of springing another ‘Cupset’, while the Wanderers will be left searching for answers as they prepare to face Macarthur FC in the A-League on Saturday night.