The good news is they'll be home for Christmas.

The bad news is Sydney FC are seemingly trapped within a footballing adaptation of Groundhog Day, after yet another dose of achingly familiar misery in the AFC Champions League.

Wednesday night's 1-0 defeat to Jeonbuk Hyundai Motors dashed what little hope the Sky Blues had left of making it out of their group and continued a trend that must be driving coach Steve Corica absolutely insane. 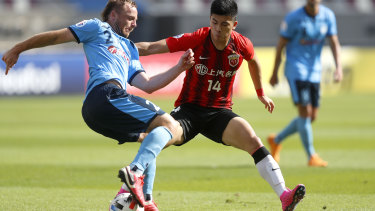 Rhyan Grant of Sydney FC competing for the ball during the AFC Champions League on November 19, 2020 in Doha, Qatar.Credit:Mohamed Farag

Once again, Sydney acquitted themselves well on the Asian stage. They were energetic from the outset at Al Janoub Stadium, in Al Wakrah, Qatar, moved the ball with confidence, and took the game to the newly-crowned South Korean champions.

But when it came to putting the ball in the net – the only true measure of success in football – they were found wanting.

It was a reprise of last week's 2-1 loss to Shanghai SIPG – or, really, take your pick of pretty much any game the Sky Blues have played in Asia over the last two years.

The final five minutes of the first half summed it all up. Sydney should have taken the lead when right-back Rhyan Grant centred the ball and found an unmarked Trent Buhagiar, positioned a few metres away from the penalty spot and with more than enough time and space to provide the finish.

But the Olyroos striker dragged his first-time effort wide of the mark – and then four minutes later, at the other end of the park, Jeonbuk made it look easy.

In reasonably similar circumstances to Buhagiar, Na Seong-eun lost his marker, received the ball and then drilled it into the bottom corner with brutal efficiency. It was his first ever professional goal.

Sydney rallied in the second half, all to no avail. The chances piled up, and players lined up to take them – Alex Baumjohann, Milos Ninkovic, Kosta Barbarouses, Buhagiar again, Alex Wilkinson, even Michael Zullo on his right foot. All of their efforts were either wide of the mark, denied by Song Beom-Keun, or meekly delivered into the Jeonbuk goalkeeper's lap.

They finished with 54 per cent of possession, 19 shots on goal to Jeonbuk's 11 – seven of them on target – and precisely nothing to show for it.

Corica is now winless in 11 games in the AFC Champions League – a record that fails to reflect the fact that they've been able to match so many of Asia's best teams in general play, but not when it comes to actually scoring goals.

There were a couple of positives, like the steady goalmouth presence of Pavlesic – who replaced suspended second-string custodian Tom Heward-Belle – and another tidy display from teenage midfielder Calum Nieuwenhof, who has done more than enough to prove he is ready for regular A-League game time.

But for a club so desperate to compete for continental silverware, close enough is not good enough. They have two more opportunities next week – against Shanghai SIPG and Yokohama F. Marinos – to get the monkey off the back, but they no longer have anything to play for.

Outside of knowing for certain they'll be able to clear hotel quarantine in time to spend Christmas with family and friends once they get back home, there are no silver linings here for the Sky Blues.