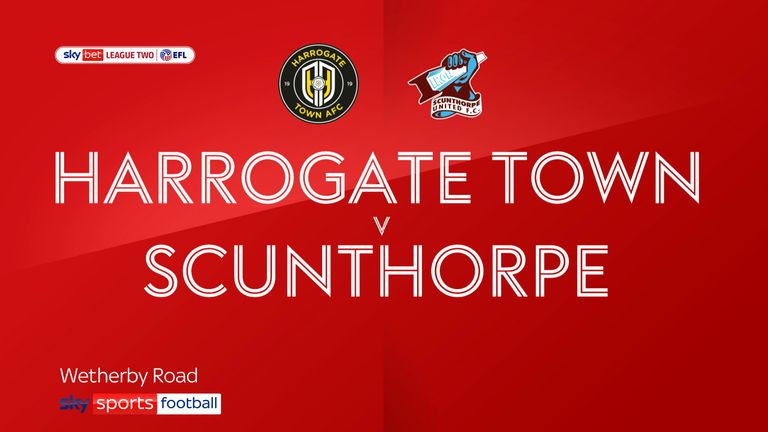 Improving Scunthorpe claimed a comfortable 5-2 Sky Bet League Two victory at Harrogate to match their best run of consecutive away league wins since 1997.

Abo Eisa netted a brace after claiming an assist for Emmanuel Onariase’s opening goal for the visitors, which was cancelled out by Jack Muldoon’s eighth goal of the season for the hosts.

Striker Ryan Loft and substitute Aaron Jarvis also went on to score as Neil Cox’s men wrapped up a third-straight victory on the road despite Connor Hall’s stoppage-time reply.

Scunthorpe went ahead in the 16th minute when Harrogate allowed Eisa’s low-delivered corner to bounce across the face of goal and Onariase stabbed in at the far post despite goalkeeper James Belshaw’s attempted save.

Simon Weaver’s men drew level in the 35th minute when Mark Beck won a free-kick on the halfway line after a grapple with Onariase.

Beck then met George Thomson’s floated delivery into the box with a downward header that gave Muldoon the chance to crash a powerful half-volley into the roof of the net from 12 yards.

But Scunthorpe were back in front by the break when John McAtee threaded a perfect ball through the left channel and Eisa sidefooted the ball past Belshaw from eight yards two minutes before the break.

It was 3-1 in the 63rd minute after Calvin Miller gave away possession in his own half and Muldoon was adjudged to have handled Alex Gilliead’s right-wing cross with Eisa slotting the resulting penalty firmly to Belshaw’s left.

Loft went on to tap in from a yard out in the 74th minute following another delivery by Gilliead from the right and – two minutes from time – Jarvis netted from a similar distance after home goalkeeper Mark Howard kicked a firmly-hit back pass straight to him.

Harrogate grabbed a consolation at the death when Hall finished well from eight yards out after fellow centre-back Jake Lawlor’s downward header.

James Rodriguez: The curious case of Real Madrid forward on course for Everton