Harry Kane has defended the decision to award Tottenham a penalty during the 2-1 Premier League win over Brighton after Adam Lallana was deemed to have fouled the striker.

In the first half at Tottenham Hotspur Stadium, Lallana jumped up for a header and in the process collided into Kane and landed on top of the Spurs captain.

Kane then dispatched the penalty, and after Spurs went on to record their fourth league win of the season, the 27-year-old has defended his actions after accusations he dived to earn the spot-kick.

“From my point of view the ball was in the air, I’ve tried to put my body in between the player to shield the ball as if you would from a goal kick,” Kane told Sky Sports.

“He has jumped into the back of me with quite a bit of force, which obviously put me to the floor.

“The ref gave it as a free-kick, VAR gave it as a foul, from my point of view I can understand maybe it’s a 50-50 decision, it’s not a definite foul you get all the time. But you definitely get five out of 10 of them in a game.

“Just the fact it was turned into a penalty it then becomes more of a talking point, but that’s why VAR is there. They have a look at it, they decide if they think it’s a foul, the ref and the VAR both did and that’s why I got the penalty.”

The extended Kane interview with Guy Havord for Soccer Saturday can be seen from midday on Saturday, November 7 on Sky Sports News.

Why so many penalties this season?

There have been 36 penalties in 68 Premier League matches so far this season, an average of more than one every two games.

At the same stage last season, 16 penalties had been given, and statistics show the 2020-21 campaign is heading for a record in a Premier League season should the current rate continue.

Kane admitted it was difficult to pinpoint exactly why more penalties are being awarded, although he said VAR is allowing referees and assistants the chance to see more of the action.

He added: “It’s hard to say. With VAR it heightens every little touch or nick when you go past a defender, but the season itself has been quite strange in terms of how many goals are being scored, teams getting beat by five, six goals.

“I can’t pinpoint it, but as soon as VAR came in last year it was going to happen. It happened at the 2018 World Cup, there were more penalties than ever before. I think it just allows referees and assistant referees to see more decisions.” 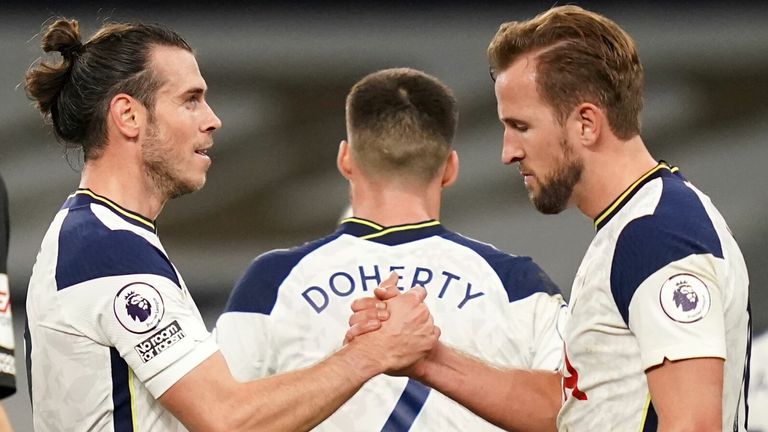 INCIDENT: Spurs are awarded a penalty after Adam Lallana falls on Harry Kane just inside the area.

DERMOT’S VERDICT: I think it was (a penalty), Lallana chose to make a challenge which I do not think was the wisest decision for him and caught Kane in the back. What is interesting here is when the VAR looks, it comes down to a factual decision and his feet are planted on the line, the shot from behind the goal quite clearly shows that, and the process here was really, really good because Moss has fed back to him: ‘You’ve given a foul, I can assure you factually his feet are on the penalty area line,’ which belongs to the goalkeeper and so therefore a penalty was correctly given.

Eric Dier says his friend Dele Alli’s future at Tottenham is still in his own hands.

Alli’s situation at Spurs looks bleak having fallen out of favour under boss Jose Mourinho this season and he was linked with a move away from the club during the recent transfer window.

He has made just three starts so far and has not made it past half-time on two of them as Mourinho takes a ruthless stance.

“It’s really up to him to put in the work, the effort, the commitment and I’m sure he will do that. That’s who he is, he’s always had that drive. It’s up to him, it’s in his hands and it’s in all of our hands.