Conte expects Tottenham to be better after four losses to Chelsea

Harry Kane unleashed an expletive outburst after squandering a glorious opportunity to draw Tottenham level against Chelsea at Stamford Bridge. With his side trailing the Blues 1-0 with an hour on the clock, the Spurs striker uncharacteristically dragged a one-on-one wide before shouting “f**** off”.

Tottenham found themselves one goal down in west London after just 19 miunutes as summer signing Kalidou Koulibaly thumped in a stunning volley, connecting perfectly with Marc Cucurella’s curled corner. Thomas Tuchel’s side were in control for much of the contest, keeping Spurs opportunities to a minimum.

However, Tottenham squandered a golden chance with just over an hour played. With Chelsea’s backline unusually out of sync, Pierre-Emile Hojberg slipped a threaded through ball in front of the onrushing Kane.

The England striker charged towards Edouard Mendy appearing destined to crash home an equaliser, however, with the goal at his mercy, the 29-year-old dragged his effort wide. The Tottenham skipper immediately fell to the Stamford Bridge turf before seemingly turning his head to gauge his manager’s reaction. 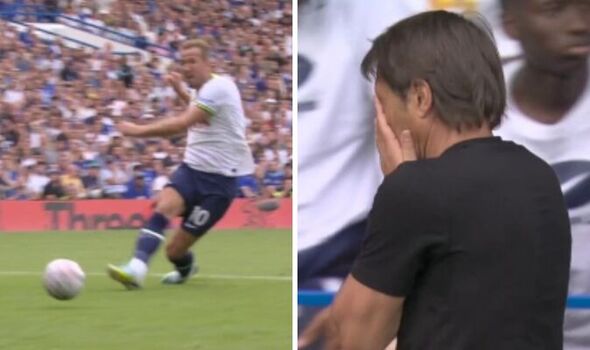 Antonio Conte put his hands over his face as he turned away in disgust, prompting Kane to slam the ground in frustration. As Chelsea’s fans cheered the Spurs star’s misfortune, Kane got to his feet, looked up and shouted: “f**** off!”

Tottenham would only have to wait a further ten minutes before drawing level, however. After Son Heung-Min intercepted Jorginho’s audacious drag-back in his own penalty area, Ben Davies teed up Hojberg, who duly drilled him the equaliser. 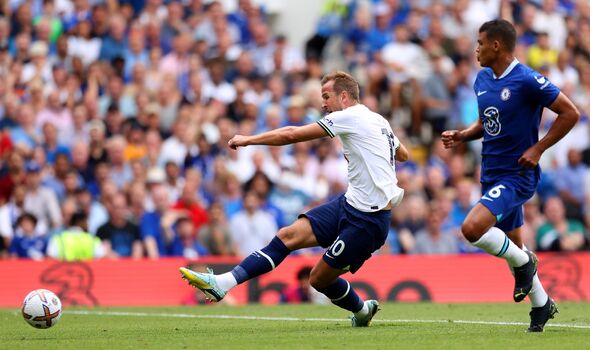 The leveller sparked hot-tempered scenes on the touchline as Conte and Tuchel squared off after engaging in an angry bust-up. Tuchel appeared to be incensed at the fact Rodrigo Bentancur wasn’t penalised for a perceived foul on Kai Havertz in the build-up.

The Blues boss’ frustration soon turned to jubilation however as Reece James hammered the hosts back in front. However, Kane would have the last laugh, glancing home a near-post header deep into stoppage time to salvage a point for Spurs.