Home » Soccer » Have Newcastle hit rock bottom under Steve Bruce? Where do they go from here? Pitch to Post podcast

Have Newcastle hit a new rock bottom under Steve Bruce? The Pitch to Post panel discuss.

Newcastle were outclassed at Brighton at the weekend, losing 3-0 as their steady decline towards the relegation zone continued.

Only one point separated them from Brighton before kick-off but the gulf was evident throughout their insipid 3-0 defeat on the south coast. The scoreline was emphatic but it still managed to flatter Newcastle, so desperate was their performance in such a big game. The feeling though is that the ever unpopular owner Mike Ashley is sticking by Bruce.

Jasper Taylor was joined by skysports.com’s Gerard Brand and Ron Walker to discuss the problems at St James’ Park and debate where Newcastle go from here?

‘No fans inside stadium has saved Bruce’s job’

“I can’t remember a Premier League team where the fans want the manager out this much.

“I struggle to see how this could have continued if fans were in the stadium. The atmosphere would have become too poisonous. A very good friend of mine is a Newcastle fan and he has gone as far as saying that he hopes the team lose because relegation is the only way Bruce will leave the club. That might sound farfetched but I’m not sure he’s alone. The feeling towards Bruce hit rock bottom months ago and actually redefines what rock bottom is as they seem to hit it every single week. 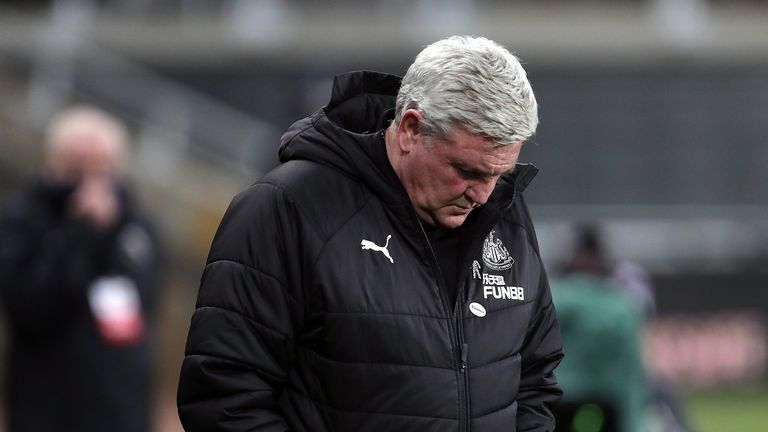 “I feel for the Newcastle fans, they must feel trapped. They are sleepwalking to relegation.

“Is it the players’ fault or the manager’s fault? You can’t sack players during a Premier League season, something needs to change. But reportedly Ashley isn’t hitting the panic button until Newcastle are in the relegation zone. If that is true, then his thinking is so flawed because if they go down they’ll hit the relegation zone in the final few games. If he’s waiting for them to be in the drop zone, it might be too late by then.

“With their last game against Fulham, they could become the first team to be relegated despite spending 37 of the 38 games outside the relegation zone.”

Would relegation make for an easier sell?

“Relegation would be terrible. When fans are allowed back in they get 50,000 every week, that’s not a club that should be playing Championship football.

“They made losses of £40m in the Championship in 2017/18. Mike Ashley has got deep pockets but the debt to him would go up. A couple of years ago they had debts to him of £144m so any hopes of him selling the club would become more difficult. If he’s getting more entrenched in the club financially that’s going to make it a less attractive prospect to any potential buyer. The crumb of comfort could be the asking price for the club, which would surely drop if they were to be relegated.

“The £350m Ashley has been asking for would be ludicrous for a team playing in the second tier, even for a club the size of Newcastle. There is so much potential at the club, which makes it all the more frustrating that they are languishing where they are.”

Who is going down?

“Fulham can stay in games, they’ve only lost by one or more goal three times this season since Jamie Carragher said they were a certainty to go down. That’s not what you’d expect from a team in the relegation zone. When they lose, they only lose by a goal. I think you’d rather be in Fulham’s dressing room than Newcastle’s. If you put a gun to my head, I’d say Newcastle will go down.”

Manchester United vs Liverpool prediction: How will Premier League fixture play out today?