Jamie Carragher has admitted Richarlison “winds me up” as the Liverpool legend once again hit out at the Brazilian in Tottenham’s 2-0 triumph over Nottingham Forest. The Spurs striker prompted an angry reaction from Carragher having been clattered by Brennan Johnson after showboating in the dying minutes of the match.

Moments after the Tottenham forward helped seal all three points for his side with a sumptuous outside-of-the-boot assist for Harry Kane’s second, the colourful Richarlison once again found himself caught up in controversy. With a matter of minutes of normal time remaining, the 25-year-old flicked the ball up by the left-hand byline and performed some keepy-uppies before attempting to pass to a team-mate.

The Brazilian’s stray ball was subsequently intercepted by Forest forward Johnson who then clattered the Spurs No 9 following a heavy first touch. Richarlison was then landed on by Johnson’s fellow Forest team-mate Neco Williams.

Following the flashpoint, Carragher openly expressed his disdain towards Richarlison – a player whose attitude he has been quick to criticise in the past. The Sky Sports commentator said: “It does wind people up. You can’t do that. But what is he doing? He just winds people up that lad, Richarlison. He winds me up. 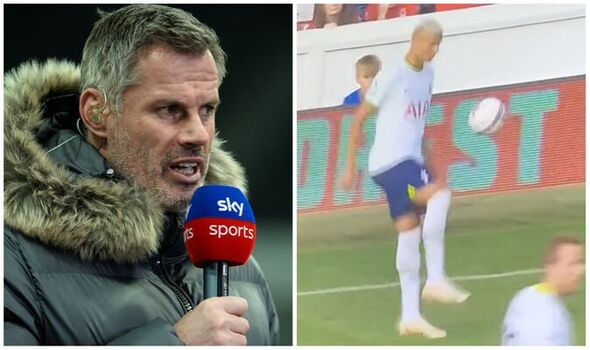 “What do you expect him [Brennan Johnson] to do? Yeah, you’re not condoning this but… big Premier League game, passions are running high, superstars taking the mick.”

Carragher was previously involved in a war-of-words with Richarlison back when the latter was with Everton last term. The pair’s feud was seemingly sparked after the former Liverpool defender screamed at Richarlison to “get up!” after he was perceived to have been feigning injury in last season’s Merseyside derby at Anfield. 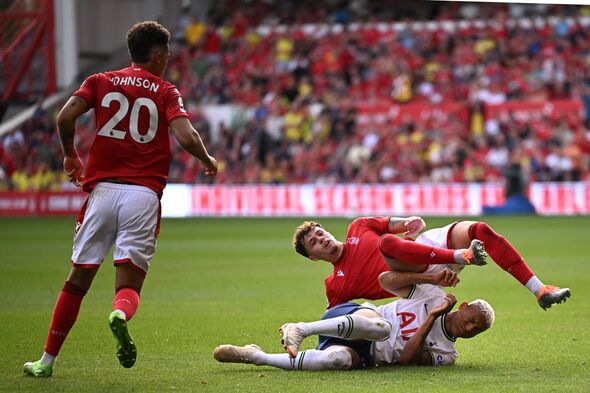 After Richarlison helped secure the Toffees’ Premier League status towards the end of last campaign by scoring in a crucial 3-2 comeback success over Crystal Palace at Goodison Park, the forward took to Twitter to hit back at Carragher over his criticisms. Tagging the pundit in a post, Richarlison wrote: “Wash your mouth before you talk about me and Everton and I don’t respect you” – ending his message with a poo emoji.

In response, Carragher welcomed the outburst and admitted he too would likely have taken a similar approach to speaking out against his critics if social media had been around back in his day. He wrote: “I actually quite like this, if Twitter was about when I was a player I’m sure I would’ve called pundits out quite a lot!!”

Barcelona in 'danger of economic bankruptcy and moral decay'