McGinn at double as Hibs twice come from behind; Ali McCann and then David Wotherspoon had put St Johnstone ahead in Scottish Premiership clash; Hibs up to third on goal difference 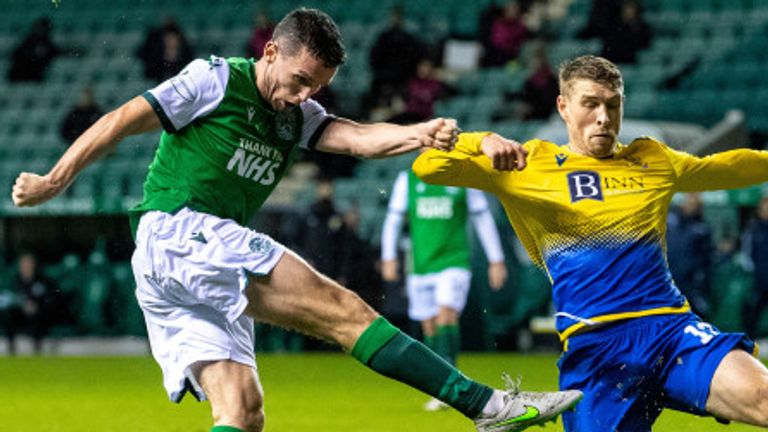 Paul McGinn was the unlikely hero as Hibernian came from behind twice to claim a 2-2 draw against St Johnstone in Tuesday’s Scottish Premiership clash.

McGinn, who had never found the net for Hibs previously, struck twice (36, 82) to cancel out efforts by Ali McCann (35) and former Easter Road star David Wotherspoon (76).

St Johnstone would have moved into the top six with a triumph but – despite the frustration of surrendering an advantage on two occasions – remain unbeaten in nine matches in all competitions.

Hibs will rue missed chances from Kevin Nisbet, Jamie Murphy and Stevie Mallan on their way to a second successive 2-2 draw but it lifts them to third on goal difference, even though they have played two games more than fourth-placed Aberdeen.

Jack Ross selected the same XI from Sunday’s showdown with Celtic, while St Johnstone made four changes from the side which played out a 1-1 draw with Motherwell on Saturday.

Fresh from scoring against the Hoops, Jamie Murphy was again in threatening mood during the early exchanges in the capital, forcing a smart low save from Saints stopper Zander Clark.

Melamed, seeking his first goal since joining the Perth Saints from Maccabi Netanya, fired wastefully over the bar of his Israeli compatriot, Ofir Marciano, after a Craig cross fell invitingly in his path.

O’Halloran then fizzed a low shot inches past the post after robbing Paul Hanlon as the visitors illustrated their attacking threat.

St Johnstone converted those warning signs into a lead 10 minutes before the break when a Stevie May shot fell kindly for McCann and the Northern Ireland international made no mistake from point-blank range.

But it took Hibs less than 60 seconds to restore parity. McGinn cut inside from the right-wing, produced a delightful give-and-go with Nisbet and struck past Clark.

Joe Newell and Mallan passed up decent chances to complete the turnaround after the break and Hibs looked to have paid the price when Wotherspoon embarked on a mazy dribble from the left before blasting past Marciano.

However, McGinn would have the final word, with the former Dundee and Partick Thistle man creeping in at the back post to meet a Mackie delivery and fire a sweet half-volley past Clark.

Manchester City 3-0 Olympiakos: Pep Guardiola urges his side to be sharper against Liverpool