Australia made World Cup history by defeating Jordan 1-0 in a combative encounter in searing temperatures in Kuwait to notch an eighth successive win in the first phase of qualifying.

The Socceroos, playing in 40 degree heat against a Jordan side who had to win to give themselves hope of progressing to the next round, stared down the challenge and took all three points thanks to another goal from giant defender Harry Souttar with 15 minutes remaining. 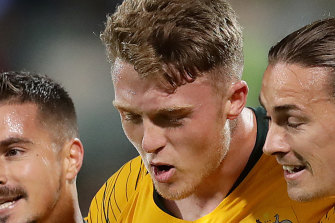 The 24-point haul is just reward for a professional and committed squad who have lived and trained together in a claustrophobic bubble in Kuwait for several weeks as they played through the four remaining qualifying games of this phase on the road to Qatar 2022. To do so in conditions described by team leader Trent Sainsbury as “ridiculous” only heightens the achievement.

Now Graham Arnold’s team will progress to the final stage, which will involve far tougher opposition in two groups of six teams each, with the top two from both qualifying for the next World Cup and the two third-placed nations having to endure the marathon of a play-off lottery.

That is all to come, however, and for many of the players who got Australia through this round of matches there will be little rest as the Olympic Games in Tokyo looms in just over a month.

Arnold had once again pledged to rejig his line-up, but he had also wanted to field his strongest side for what had always looked like the toughest test.

He could not do that because of the absence of Melbourne City-bound Mat Leckie, but otherwise this was a committed and determined Australian line-up that was focussed on achieving its historic goal.

Once again he tinkered with the team’s shape – something that he and the players believe will give them flexibility for the more difficult assignments that lie ahead.

Jackson Irvine went close in the third minute after a driving run and shot, while another Scottish-based player, Martin Boyle, saw his free kick fall just wide midway through the first half.

Behich shot across goal and Souttar looked to find his range with a header.

But it was not all one-way traffic. Twice, Bahar Abdel Rahman went close with free kicks for Jordan – the first drifting wide, the second forcing Mat Ryan into a diving save. 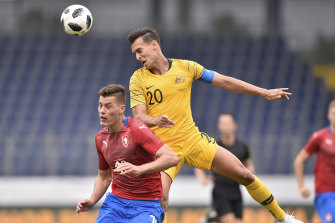 Socceroos veteran Trent Sainsbury in the lead-up to Russia 2018.Credit:AP

The Jordanians, who were banking on securing passage through to the next phase as one of the best group runners-up, increased their desperation in the second period, but they were matched by Australia and when Souttar rose to head his sixth goal for Arnold’s side their hopes were shattered.

“Before we came into camp we were desperate to win all eight games and that’s what we have done. The boys threw their bodies on the line, but we played some really good stuff as well,” said Souttar.

Socceroos stalwart Trent Sainsbury broke down in a post-match interview as he acknowledged the significance of his achievement in gaining a 50th cap for his country.

The centre-back choked back tears and could not speak for several seconds as he recalled how he thought his career might have ended seven years ago, almost before it had really got going, when he sustained a serious knee injury that kept him out of contention for the 2014 World Cup.

“I think how lucky I was to get one. I love being a part of this family, with the boys,” he said, before his voice cracked, and he fell silent for almost a minute.

“I think I was a good shout to go to the 2014 World Cup but I busted my knee open, broke my knee cap, and I thought my career was finished.”