Eddie Howe has revealed that Premier League rivals are refusing to do Newcastle any favours since the Saudi-led takeover and accused them of inflating transfer fees for his club, admitting ‘everyone is against us’.

The Magpies failed in their efforts to sign Leeds winger Jack Harrison and Leicester midfielder James Maddison and were also frustrated by loan approaches for West Ham defender Harrison Ashby and Arsenal utility man Ainsley Maitland-Niles, among others.

And Howe gave a candid answer when asked if domestic clubs, seeing Newcastle as a threat, had proven difficult to deal with during the summer window. 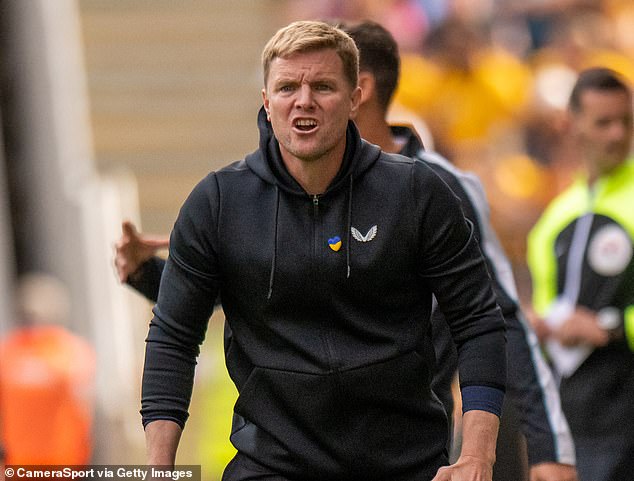 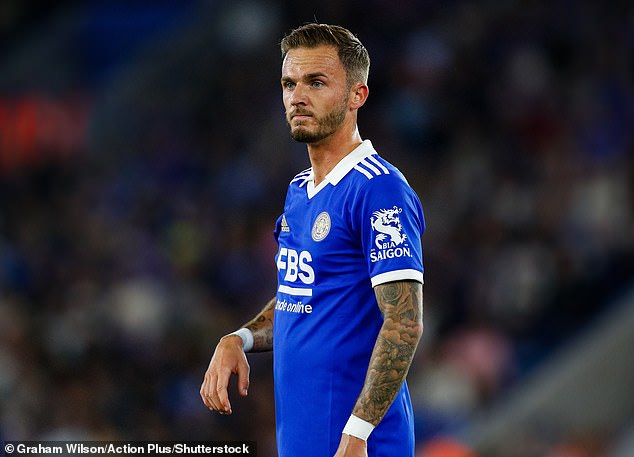 ‘That’s true, I would say so,’ he said. ‘That was definitely something we felt in the market. Domestic clubs didn’t want to be seen to be helping us. We’ll have to take that, that is part of where we are at the moment.

‘We have certainly found there is no one there ready to do us a favour. It’s the narrative regarding us that has changed. If there is anything domestically, teams will put their price up if it is Newcastle. That is the same around the world, that is something we are having to deal with.

‘That is why we have walked away from a few deals because I think it is important we are not seen as that club that will pay what is asked. I think it has to be fair.

‘There is a real feeling of us internally knowing we are against everybody else. That is healthy and I would embrace that. I would say we couldn’t be more together at the moment.’ 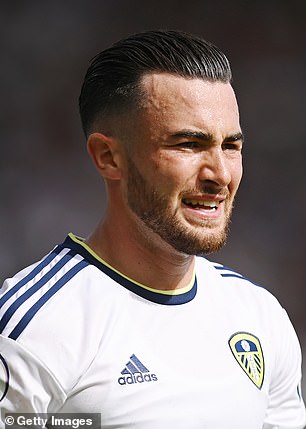 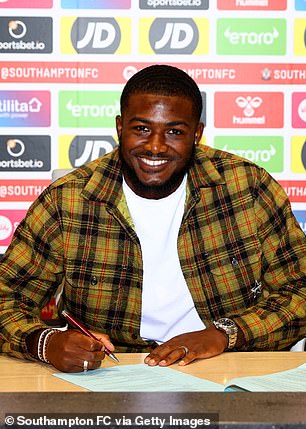 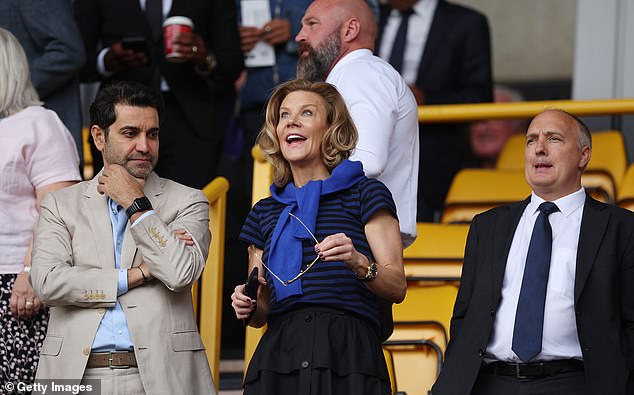 Newcastle spent £115million on four new players, taking their total investment since January in excess of £200m, and Howe admits they went beyond budget.

‘FFP definitely was a big hurdle for us to deal with this transfer window,’ he said. ‘We have gone over the guidelines given. I’m not sure whether it has affected future budgets, that’s not for me to answer. But we have slightly exceeded where we wanted to be.’

Newcastle were denied a point at Liverpool on Wednesday when Fabio Carvalho scored in the 98th minute, despite only five minutes of injury-time being allocated.

Howe says they will not be complaining to the PGMOL but claims referee Andre Marriner was wrong not to blow for full-time earlier.

‘I think it’s a fruitless exercise (complaining to PGMOL) and we won’t get any benefit from it,’ he said. ‘I’ve been there many times and I don’t think you get the reward for your efforts in that sense.

‘But I thought the game should have ended with our last attack, looking at the time and having gone back through it. When Joelinton skips to the by-line and puts the cross in, we had that last attacking action. I think that’s time, the moment to end the game. He obviously didn’t.’ 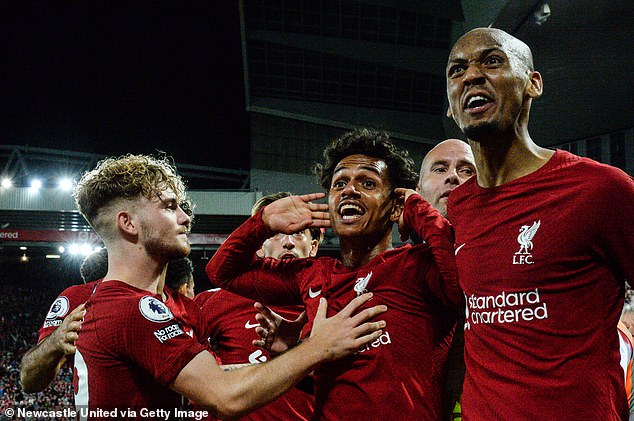 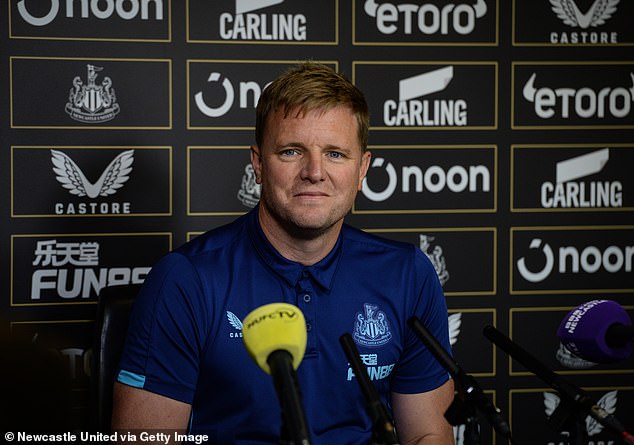 Liverpool accused Newcastle of time-wasting during the second half and his team were booed off by the home fans, but Howe said: ‘That is their opinion. I’m not concerned by their opinion.

‘We know what we were trying to do. We were trying to win the game. I’ve given reasons as to why there were stoppages. Nick Pope went down twice, the first time he was feeling a bit dizzy, the second time, I think he fell on his back. I’m not sure there’s a lot we can do there.

’It was a bit bitty in the second half with substitutions and there was certainly no gamesmanship on our side. That’s just the way the game went.

‘We want to fight for every point, every tackle and do everything we can to win. If that’s unpopular with people, then so be it, but we’ll continue to hopefully play in the way that we all see that we should. Aside of Newcastle, what people think of us – that Is not my concern.’ 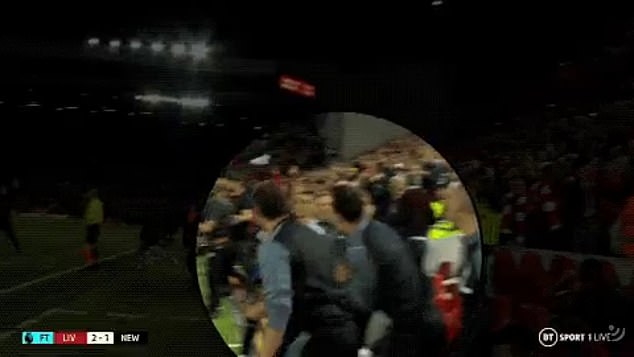 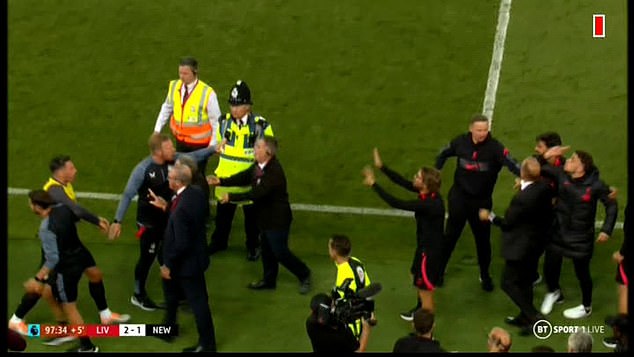 A melee on the touchline followed, with several members of staff from both sides involved

The two benches clashed following Liverpool’s late winner, but Howe said: ‘I haven’t seen the pictures back of the two benches. Immediately, when the goal went in, I took myself somewhere else mentally. I don’t know where I went, but somewhere dark!

‘I always try and stay out of those flashpoints unless I feel I need to be there for my team and for my staff, but emotions were running high and that’s the beauty of the Premier League.

‘I had no issue with my bench protecting themselves as part of the game.’

Howe, meanwhile, says he read Sportsmail’s story of the club’s owners Amanda Staveley and Mehrdad Ghodoussi narrowly escaping serious injury when a motorbike carrying a balaclava-clad suspected drug dealer nearly collided with them outside of Anfield on Wednesday night.

‘I certainly wish both of them well and hope they’re okay,’ he said. ‘The safety of every supporter, every person coming to the game, is absolutely paramount.

‘It sounded like it could have been very different, so my thoughts are with anyone that was hurt in the incident.