Home » Soccer » ‘I want my Socceroo shirt back’: Juric here to stake his claim

Adelaide United coach Carl Veart declared that Tomi Juric was the "best No.9 in the country" after his first appearance for the club in their season-opener against Western United last Monday night.

The striker, back for his second spell with Adelaide after five years in Europe, prefers to let his performances do the talking. Still, he has a blunt warning for Melbourne City on Sunday night, and other rivals he will face over the coming months. 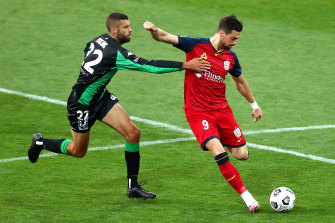 Tomi Juric (right) is keen to make an impact at Adelaide and reclaim a spot in the Socceroos line-up.Credit:Getty Images

And he set up James Troisi for the winner for the Socceroos in the 2015 Asian Cup final in Sydney, holding off South Korean defenders to square the ball for Troisi to slam home, giving Ange Postecoglou's side the title.

Juric also played in all three World Cup games for Bert van Marwijk in Russia, coming off the bench against France and Denmark and starting against Peru.

But since then his career has plateaued and he opted to leave his Bulgarian side, CSKA Sofia, as COVID-19 struck Europe in favour of a reboot back home.

Although a Western Sydney youngster, it was Adelaide who gave him an A-League opportunity in 2013 when he returned from his first European spell in Croatia and it was to South Australia he opted to return this time.

"That was a big factor for me why I came back, it was something familiar, something where a lot of good things kicked off. I needed that kick-start again," Juric said. "All the pieces of the puzzle fitted together for this one, so it made the most sense."

The pandemic and the impact it has had on life in Europe was a major factor.

"It's very difficult times, and just looking at the options I was searching for, I just wanted to play regularly. A lot of clubs were looking at bringing familiar faces back, or people from their own country so coming back home just made sense," he said.

"I am familiar with Adelaide, I spoke with the club and we made it a goal to get back on the pitch and play regularly. I want to get my body back into a good state so that I can push for getting my position back for the Socceroos."

Juric made an impressive return on Monday, utilising his traditional playing strengths, holding the ball up and allowing fellow forwards to play off him.

"Being a bigger boy [at 191 centimetres], having those attributes for that No.9 role, it would be a shame if I didn't use it to my advantage. I just try to keep my game simple, especially now when I am not yet as fit as I would like to be having just come out of quarantine and not playing much in Europe.

"So it's been very inconsistent, and that is why I came back home, I wanted to get some consistency back into the mind, body and legs."

City will be without Uruguayan midfielder Adrian Luna, sent off in the opening 1-0 win over Brisbane Roar, and Socceroos frontman Andrew Nabbout, who is out with a hamstring injury and will be missing for six weeks.

French midfielder Florin Berenguer, a regular under Erick Mombaerts, was on the bench in Queensland and may be Luna's replacement.

"Other players will get their opportunity to show what they can do," said coach Patrick Kisnorbo.