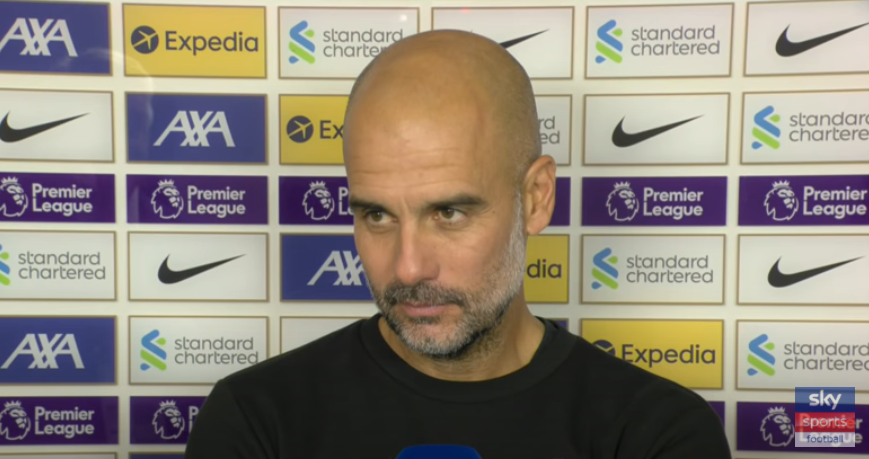 Pep Guardiola aimed a dig at Liverpool and Manchester United after being left unimpressed by the officials during Manchester City’s draw at Anfield.

Guardiola was adamant Liverpool should have been reduced to ten men during Sunday’s clash after James Milner – already on a yellow card – chopped down Bernardo Silva.

Referee Paul Tierney gave Man City a free-kick but did not pull out a second yellow card, while VAR did not intervene as it was not deemed a ‘clear and obvious error’.

Guardiola reacted furiously on the sidelines and his mood got that bit worse just minutes later when Mohamed Salah produced a moment of brilliance to given Liverpool a 2-1 lead, following earlier goals from Sadio Mane and Phil Foden.

Guardiola said it was ‘clear’ that Milner should have been sent off and claimed a Manchester City player would have received a red if the situation was reversed, while he brought up local rivals Manchester United in his response to the incident.

‘It’s Anfield, it’s Old Trafford. In our situation a City player is sent off. It’s too much clear. It was a second yellow.’

On his team’s performance in the 2-2 draw, Guardiola added: ‘What a game. That is the reason the last years Man City and Liverpool were always there because we try to play in this way.

‘Unfortunately we couldn’t win – but we didn’t lose. That’s why the Premier League is the best [that it could go either way]. It was great, really great.

‘It is what it is. The result is the result and we cannot change it. I know how difficult it is against these players and this manager.

‘Every time it is incredible challenge for us. The way we played at Stamford Bridge, in Paris and today shows we are a great team.

‘When we lose the way we play in Paris [against Paris St-Germain] and draw today it is good. I pray we continue and player come back from their national teams safe.’

Jurgen Klopp, meanwhile, claimed he ‘didn’t see’ Milner’s challenge on Silva and said it was always the plan to take the 35-year-old off in the second half.

‘Pep got a little bit outraged over that,’ he told Sky Sports. ‘I didn’t see but I saw Pep’s reaction obviously.

‘I didn’t know exactly why he did that. Milly [Milner] did incredibly well first half and it is not easy to defend these guys. We were always going to take him off at that stage anyway.’

Premier League awards: Team of the season, best player, transfer and moment of 2019/20