Home » Soccer » It’s coming home: Matildas back with a bang in thrilling win against Brazil

The Matildas marked their long-awaited homecoming with one of their best performances under coach Tony Gustavsson, beating Brazil 3-1 in a pulsating clash in Sydney on Saturday night.

Goals from Clare Polkinghorne, Mary Fowler and Emily van Egmond helped Australia return to winning ways after a month of intense on- and off-field scrutiny, following a shock loss to Ireland and allegations made by former star Lisa De Vanna of deep-seated cultural issues within the women’s game.

It was their sixth consecutive win over Brazil but just the second time the Matildas have notched a regulation-time victory during Gustavsson’s short reign, which has included eight losses and a total of 31 goals against.

By no means was it a perfect display – particularly in the second half. As the game opened up, Australia’s defensive vulnerabilities were on full display, and a more ruthless opponent would have taken advantage.

But the result and the manner of play under such trying circumstances was vindication of not only Gustavsson’s methods but the spirit and character of his players, who lapped up every moment in their first match on home soil in almost 600 days.

So too did the crowd of 15,270 at CommBank Stadium, who turned up for Sydney’s first major sporting event – aside from The Everest – since the COVID-19 outbreak that forced the city into lockdown four months ago. The two teams will return for a rematch at the same venue on Tuesday night. 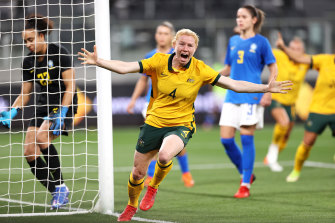 Just as Gustavsson forecast they would in his pre-match press conference, the Matildas made a blistering, high-energy start. Their passing was crisp and purposeful, and their pressing of the Brazilians relentless whenever they lost the ball, quickly dispelling any notion that the recent tumult surrounding the team could have impacted them on the pitch.

It took just nine minutes for Australia’s first genuine chance to arrive. Tameka Yallop should have put them in front then and there. She burst through from midfield after some neat combination play and was one-on-one with Leticia but pushed her shot straight at the Brazilian goalkeeper.

As Yallop tried to vault over the onrushing Leticia, she accidentally struck her head with a knee, leading to a lengthy stoppage before she was eventually cleared to continue.

There were plenty of other nearly moments but it wasn’t until the 38th minute when the Matildas had another clear-cut opportunity – and this time they took it, from a free kick earned by Fowler. Steph Catley’s delivery from the left flank found Sam Kerr, who nodded the ball across the goal face for Polkinghorne to tap in at the back post.

It meant the Matildas went into the half-time break with their tails up, but two minutes into the second half, they were nearly embarrassed. Australia’s defence was all at sea as a fast break from Brazil put substitute Adriana clear on goal. Fortunately for the hosts, her shot went directly at Lydia Williams, who saved comfortably.

Fowler made it 2-0 in the 66th minute, heading in a terrific cross from van Egmond for the fifth goal of her burgeoning international career. The Matildas then let their guard down, conceding two minutes later as Adriana pounced on some loose defending, much to the delight of a boisterous bay of Brazilian fans at the southern end.

But van Egmond put the result beyond doubt 10 minutes from time, side-footing home from close range after another terrific ball into the box from Catley.