Guardiola: Haaland cannot win Champions League for Man City on his own

Wolves defender Nathan Collins was shown a straight red card for a shocking tackle on Jack Grealish that left the Manchester City star with a cut on the top of his leg. Referee Anthony Taylor didn’t hesitate in giving the former Burnley star his marching orders, with Grealish left in a heap on the turf.

Grealish came into the match facing heavy criticism for his lack of output this season. Questions were asked of England boss Gareth Southgate after he was included in the latest Three Lions squad, but the wide man mounted a swift response to his doubters on Saturday.

In a rapid start from the visitors, Kevin De Bruyne’s low cross was met by Grealish who tapped in to claim his first Premier League goal of the season. The former Aston Villa talisman was heavily involved and Collins seemingly had enough 10 minutes before half time as he recklessly flew into a challenge that left Taylor with a clear call to make.

“It’s a 50-50 at best,” said BT Sport commentator Jermaine Jenas. “Because the ball’s in the air, he’s got to be smart and he catches Grealish pretty badly at the top of his right quad. Anthony Taylor, no option whatsoever other than to send him off.” 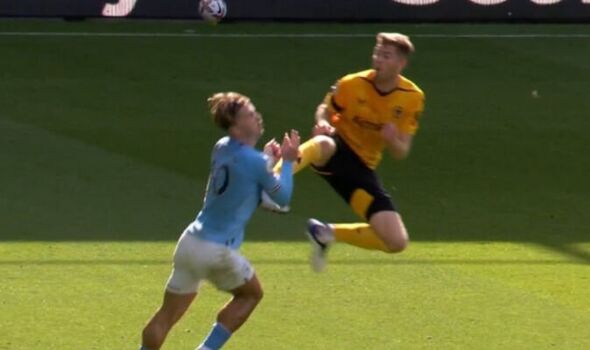 Having remained on the deck to receive treatment, Grealish eventually rose to his feet to show the referee a cut near the top of his leg which emphasised the wayward nature of Collins’ tackle. By the time Collins took his leave, Erling Haaland had doubled City’s lead with Wolves facing a huge mountain to climb by half time.

The Norwegian marksman was already on 13 goals in all competitions by kick-off at Molineux, but he made it 14 with a powerful run at the heart of the hosts’ defence and a pinpoint right-footed finish past Jose Sa.